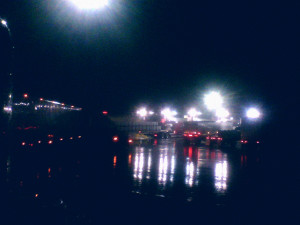 The emotional landscape of motherhood can often be hard to describe and is underrepresented in genres such as poetry. As a poet and mother of a two-year old with a new baby on the way, I appreciated “Rain” by Tara Bray and found it very instructive on several levels. In this candid poem, a “family of flight” rests at a truck stop. The mother, still awake, observes her sleeping husband and daughter and affectionately compares them to birds, husband as “flycatcher, scrub jay, kingfisher” and daughter as “little chickadee.” While the family is placeless and neither here nor there, Bray’s devotional voice both grounds and comforts me. She writes, “There’s only night and rain, husband, babe, sleep, / this black string of small good things.” Amidst uncertainty and the obscurity of a dark, rainy night Bray celebrates her tribe, her “two glimpses / of the afterlife.” She is enlivened, versus saddened, by the sound of the rain and her hope, as well as her honesty, are stirringly contagious.

Like a dark miracle, they sleep, two am
at a truck stop outside Indianapolis;
my husband of three cities, three years—
flycatcher, scrub jay, kingfisher;
our baby daughter, little chickadee,
pale wrinkle, my inkling.
A motherless girl who now mothers,
I am loved twice, two orchids, two glimpses
of the afterlife, two clear-wing butterflies,
two fox sightings—twice scraped, twice owned.
A cold rain splatters into neon
and the random chill of trucklight
while my husband breathes slowly,
as he does everything, his lips full and parted.
We are a family of flight, tracing the hunger
of this country, half ravished and heading home
to Georgia as the world calls us to sleep.
Staring at my husband’s hands of clarity,
skin smoother than mine, I am trespassing
into a field of orphan lilies brushed with sun,
am given two smooth stones, crushed by a blessing.
I have forgotten my sister, the dark-eyed junco.
There’s only night and rain, husband, babe, sleep,
this black string of small good things.
We are not young parents, but this moment
contains a visible trace of newness, shielded
like my daughter’s eyes, though shut,
alight with the color of sky and earth.
Praise her intent awakening. Praise her sleep.
Praise the rain’s joyful tapping—again, again for grace.