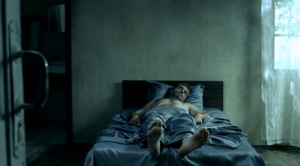 This post appears as the Editorial Statement in Image issue #93 on the art of film guest edited by Gareth Higgins and Scott Teems.

For years I’ve wrestled with this seemingly straightforward declaration from the notebook of revered French film director Robert Bresson (a small book, but a bounty of inspiration). I’ve wanted to believe in his “necessary images” and therefore aspire to create them. To use simple, unadorned imagery to distill the filmmaking process to its fundamental elements: juxtaposition and montage, sound and music. To tell a story with pictures. To eliminate beauty for beauty’s sake. And to resist the urge to manufacture emotion, lest I betray my lack of faith in the form.

The realization of this principle, in theory at least, would compel the audience to project themselves onto the screen, to bridge the gap between the expressed and the intended. It would necessarily result in the creation of films in which—to paraphrase Flannery O’Connor—“two plus two equals more than four.” That is to say, it would result in art.

If simplicity is the ultimate sophistication, then Bresson was one of our most sophisticated filmmakers. The quiet confidence with which he allowed his stories to unfold never ceases to astonish me. Like his Japanese contemporary Yasujirô Ozu, Bresson was fearless in his formalism, and the best of his work conveys a deep respect for his audience and a profound trust in the power of pure cinema.

With fear and trembling, I confess: though I’ve long appreciated Bresson’s stark asceticism, and have found moments of reverie in his work, rarely have I been deeply moved by it. I tend to find myself at arm’s length from his stories, unable to project enough of myself onto the blank canvases of his characters to create real emotional connection or transfer. The fault, I’m certain, lies with me. The films require too much of me, perhaps, especially in our current Age of Distraction.

But his idea has never lost resonance for me, and recently I’ve found my relationship to the notion of “necessary images” evolving. Perhaps this in itself would be a betrayal of Bresson’s rigid principles, but it is vital for me to create a working relationship to the idea, one that makes it approachable and gives me new vision for my own work as a filmmaker.

I’ve come to discover that the answer, for me, lies in definition: What do we mean by necessary?

The cinematic canvas revels in beauty. The widescreen frame is a window onto the glory of creation, and many of the most powerful experiences I’ve had in movie theaters have come from grand encounters with the vastness of nature (on earth and sometimes beyond), as rendered by our most accomplished visual stylists.

In the sprawl and splendor of films directed by Terrence Malick, Andrei Tarkovsky, Akira Kurosawa, Mira Nair, Stanley Kubrick, Wim Wenders, Alfonso Cuarón, Paul Thomas Anderson, David Lean, Kathryn Bigelow, and Werner Herzog, to name but a very few, we are taken to distant lands, ancient times, and the outer reaches of the universe. We are consumed by the images, swallowed whole inside a darkened room, in the way only moving pictures on giant screens can do.

Watching Malick’s The Tree of Life on a massive screen at the ArcLight in Los Angeles—the images brilliant and towering, calling me to attention; the bass rumbling through me—was a more deeply religious experience than perhaps any I’ve had in a traditional church. During the sequence that imagines the creation of the earth, I had to restrain myself from standing and raising my hands in awe and worship, overwhelmed by the glory of it all. Through the flickering images I was drawn to the feet of God.

Equally as powerful—and perhaps even more necessary, given the divided state of our world in 2017—have been my various cinematic encounters with the mystery that is the human soul. For the eye is our window, as we are apt to say, and a film camera provides our most immediate and unflinching view through the glass.

In films directed by Krzysztof Kieślowski, Abbas Kiarostami, Andrea Arnold, Ingmar Bergman, Agnès Varda, Jean-Pierre and Luc Dardenne, Spike Jones, and Carl Dreyer (again to name but a handful), I have discovered deep and transforming truths about myself by looking into the faces of others. This kind of revelatory experience is virtually impossible in our everyday world, outside of our most intimate relationships. But in a movie theater, it is a regular occurrence—and therefore an often unappreciated one.