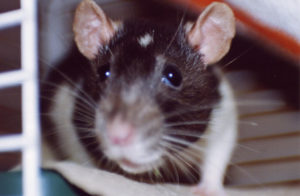 This post originally appeared on “Good Letters” on October 15, 2014.

About a year ago I felt an overpowering urge to say the “Our Father.” I’m still not sure why. I never knew my biological father, so I’ve always been indifferent to this prayer, the only prayer Jesus taught us. In the back of my mind I’d think: He’s not my father. I don’t have a father.

And my heart would be empty even as my mouth said the words.

Until that moment my habit had been to say part one of my prayers lying in bed before reading for an hour, then part two after I turned out the light. There was no mystical or theological reason for dividing up my prayers, sandwiching the secular (currently the novels of Dennis Lehane) between the sacred, albeit rote, words of the “Glory Be,” the “Hail Mary,” and the prayer for the dead.

I suspect it was like stopping halfway up the mountain, claiming to admire the view when it’s really all those damn cigarettes making my heart thump like a jackhammer, my lungs wheeze like a broken bellows.

But that night, for the first time since I was a child, I knelt by my bed and prayed.

Nothing earth-shattering happened. My orphaned heart was not suddenly suffused with the warm glow of filial love. But neither did I feel foolish. It felt right somehow. So I continued.

At about the same time, an extremely large rat took up residence in my house.

I’d seen rats running along power lines, flickering fugitive as thought along the fence at dusk, snacking on my compost bold as brass in the middle of the day…and I never had a problem with them.

In an instant I morphed from St. Francis of Assisi to Kurtz from Conrad’s Heart of Darkness. I had only one thought: Exterminate the brute.

Each night I knelt and said the “Our Father” followed by the Act of Contrition, the first three words echoing the ones I said on first sighting the rat: “Oh. My. God….”

Now I knew why God had wanted me to kneel when I was saying my prayers: I was in a perfect position to check under the bed for the rat. Touching my forehead to the floor in that beautiful yet unsettling posture of humility all Muslims adopt when they pray to Allah, I had a perfect rat’s-eye view of my home; I could see all the possible hiding places, all the nooks and crannies and gaps.

My initial strategy in the war was to starve the enemy out. I put the bread in the bread bin, removed the fruit from the bowl on the counter, made sure the pantry door was tightly shut. But what to do about all those crumbs and scraps that inevitably fall onto the floor during the course of a day? So I cleaned the kitchen, vacuumed the floors, and waited. Each morning I looked for signs of the rat’s nocturnal presence—pellet-like droppings, tiny bite marks in an apple I had carelessly left on the counter.

The thoughts that fed my anxiety about the future were harder to put away. My fear came out at night while I lay on my bed, gorging on “what ifs,” growing fatter each day.

I began to meditate on “Thy will be done” with its unmistakable echo of Christ’s agonized prayer in the Garden: “Thy will, not mine, be done.” I wondered if I could say that and truly mean it.

I didn’t think so. From my earliest days, I had known that if I didn’t shift for myself then no one would. I had thought this made me strong but now I realized it had made me weak, defenseless as a fatherless child. Somewhere in my past, I unwittingly left the door to my house open and a rat had entered. If I did not hunt it down and kill it I knew I would have no peace.

I gave up walking around the house barefoot and was afraid to go into a room when it was dark for fear of stepping on it. I imagined the feral shriek, the squirm of something yielding and alive beneath my foot followed by the inevitable bite, rabies, hospitalization, Last Rites, and a moving farewell to my husband, Greg, and the children who, for the first time, would see that I was truly a saint.

At night, I baited traps with peanut butter only to discover them in the morning empty, traps un-sprung. I had heard rats were crafty buggers but now I had definitive proof. I imagined it carrying around a blueprint of all the traps and poison baits on the market, a tiny, malevolent intelligence scoffing at my puny human IQ.

“And forgive us our trespasses, as we forgive those who trespass against us.”

I’m not forgiving that fucking rat.

I saw it twice, a black streak racing along the skirting board in a blur of rodent grace.

Weeks went by and still the rat eluded me. Each evening I would set the traps, put out the poison, then kneel in my room to pray. I began to beg St. Francis for his intercession. I knew about Brother Sun and Sister Moon but I don’t recall him ever mentioning Cousin Rat.

Then one morning I saw it coming into the kitchen as I was going out. We stared at one another in disbelief, two primordial adversaries meeting face to face at last.

Uttering a yelp of triumph, I chased it behind the bookcase and blocked off its escape. After that it was child’s play to trap it in a tall Tupperware container I used for freezing soup.

I thought: I’ll have to kill you. But watching it scrabbling about in the bottom of the container, its pink, almost delicate paws trying in vain to get a purchase on the smooth plastic sides, the Kurtz in me fled.

“Let him go,” I instructed my son in a manner that would have brought tears to David Attenborough’s eyes.

Later, when I asked where my Tupperware was, Charles (whose name means “warrior”) told me it was too bloody to be re-used. Valiant soul.

Since the rat’s demise I have been waiting for his friends and relatives to show up. So far, so good. My husband is convinced he was a lonely bachelor. I pray so.

“But deliver us from evil. Amen.”

Suzanne M. Wolfe grew up in Manchester, England, and read English Literature at Oxford University, where she co-founded the Oxford C.S. Lewis Society. She is Writer in Residence at Seattle Pacific University and has taught literature and creative writing there since 2000. Wolfe is the author of Unveiling: A Novel (Paraclete Press, 2004) and co-founder, along with her husband Gregory Wolfe, of Image.

Above image by Kai Schreiber, used with permission under a Creative Commons License.