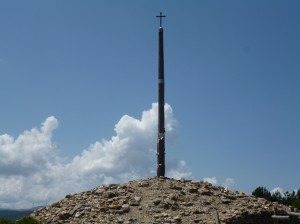 This post originally appeared on “Good Letters” on October 14, 2014.

The Way of Saint James—El Camino de Santiago—is a pilgrimage that began in the Middle Ages and remains popular today. Each year pilgrims from all around the world walk from points throughout Europe to reach the tomb of Saint James in Santiago de Compostela, Spain. Some do it for sport, others for contemplation, others to pray for miracles.

In September 2013 my husband and I were among the pilgrims. We began our walk in León, trekking 200 miles in twelve days.

Our first day ended in Hospital de Órbigo, a village with an arched Gothic bridge, our second took us to Astorga, a small city with a gorgeous Gaudí palace, and our third finished in Rabanal del Camino, a stone village with a tiny central square.

On the fourth day of our Camino, we rose before dawn and departed Rabanal. As we walked a country road beneath the moon and stars, I could feel the grade increasing, straining the backs of my legs. We were ascending the pass of Irago. Soon the sun rose lemon-yellow, revealing iridescent mountains, releasing the scents of heather and gorse.

We arrived in a village called Foncebadón. There, in the eleventh century, a hermit named Gaucelmo had built a hospital, hospice, and church for the pilgrims on the Camino, but these had fallen into ruins, which we passed as we left town.

By midmorning the day was growing hot, and we reached the Cruz de Ferro, a simple iron cross atop a thirty-foot, weathered, wooden mast that marks the highest point of the Camino. According to tradition, Gaucelmo had built the cross too.

The Cruz de Ferro is surrounded by a hillock of stones amassed through the years by pilgrims who perform a special ritual there. They bring a stone from their homeland, or one they’ve picked up along The Way, and add it to the hummock.

Each stone is symbol of a burden a pilgrim wants to leave behind before leaving the Cruz de Ferro and beginning life afresh. Some stones have messages written on them, others the names of towns or people. Some have paper notes or photos tied to them, others stuffed bunnies or bears.

I’d come prepared for this moment. From my backpack I sifted a pebble I’d brought from my garden at home. Holding it in one hand, I climbed the hillock of stones, which shifted and clinked beneath my feet. When I reached the base of the mast, I looked up along its length at the turquoise sky. There, high above my head, the iron cross glinted in the sunlight making me squint.

I kneeled at the base of the mast, pressing my forehead on the wood. I thanked God that I had legs to walk and vowed to finish the Camino for Julia, whose legs no longer worked. I prayed for Julia’s healing, that she could soon leave behind her wheelchair, symbolized by my stone. Then I placed my stone among the others, stood, and descended the mound.

There, at the bottom of the hillock, I saw a young woman and man who had just arrived. They were standing, locked in an embrace, tears streaming although they were smiling, with the shadow of the Cruz de Ferro cast long on the grass beside them. That’s when I saw it once again: reciprocal adoration, the fusion of two souls.

I didn’t know the couple’s story and I didn’t need to. For me, they were Julia and Roy, the way they’d been before the wheelchair, the way I’d prayed they’d be again.

I never told Julia or Roy about the Cruz de Ferro, prayer, or stone. I never tried to befriend them; the timing seemed all wrong. But I continued to go to Italian class, each week more moved by their bond.

One day towards the end of class, Julia was commenting on a character when she began coughing and gasping. Her eyes protruded from their sockets, and she stared at us in terror. Someone grabbed a glass of water, another took her by the shoulders and tried to calm her down, another seized a phone.

Roy arrived at that moment, and the rest of us moved aside. He crouched before his wife, looking straight into her eyes. He asked her to match his respiration—inhale, exhale, inhale, exhale—as husbands often do with Lamaze. Soon Julia was breathing, and Roy carried her away.

They never came to class again. Julia died, her breathing having failed her, six months after my Camino.

I don’t picture death, though, when I think of Julia and Roy. Instead, I see them standing, locked in an embrace, tears streaming as they smile, with the shadow of the Cruz de Ferro cast long on the grass beside them. The sun shining overhead, the wheelchair now discarded, they are free from their iron cross.

Jan Vallone is the author of Pieces of Someday: One Woman’s Search for Meaning in Lawyering, Family, Italy, Church, and a Tiny Jewish High School,which won the Reader Views Reviewers’ Choice Award. Her stories have appeared in many publications. A former literary editor for “Good Letters,” she lives and teaches writing in Seattle.

Above image by Jan Vallone, used with permission.