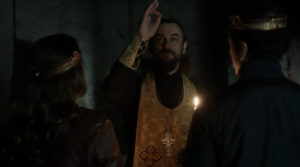 In recent months several of us have quipped that the drama surrounding the Trump campaign and presidency would make for a great plotline on the FX drama, The Americans. A show about Russian spies living in D.C. during the Cold War easily brings to mind our present-day episode of America-Russia relations.

If you watched the most recent season, you might have found your imagination wandering from the fictional Jennings family to America’s stranger-than-fiction reality. You might have had odd thoughts, like: I wonder if that’s really Rob Goldstone’s hair? And then: Tabloid journalist? Or Russian spy completing the Hail Mary of espionage assignments?

Who can know anymore?

Joe Weisberg says his show is less about international relations and more about a marriage. I suspect this is only partly true. Watching Season 5, I realized that The Americans intimates something fundamental to national identities through its particular marital scope: Crucial to a healthy body politic is a recognition of the blessed discoveries—and dangers—of our corporeality.

Spy craft plots the show’s drama: Disguises, eavesdropping, dead drops. Most intriguing, though, is the intersection between how Elizabeth and Philip cultivate potential “assets” for intelligence gathering, and how they then share that intelligence together. In disguise with others, Philip and Elizabeth build a rapport by any means necessary, including offering their bodies. They manipulate others into revealing secrets that can help Mother Russia.

With others, the Jennings are cold blooded assassins; back at home, the warmth returns, and it rarely feels good, save for the solace they find in one another.

Elizabeth and Philip’s arranged marriage thrills. The conversations. The knowing gestures. The tag team maneuvers. We’re invited to share this secret knowledge as their relationship becomes more than an assignment, and a central tension emerges. Can their commitment to Russia be the tie that binds?

In the most recent season (spoilers ahead!), The Americans plods. The Jennings are burned out. Their teenage daughter, Paige, now knows about her parents’ identities (and therefore hers). Parenting a teenager is exhausting; parenting a recently born-again American teenager after she discovers her parents are Russian spies is something worse. Especially after she shares their secret with her pastor.

Philip has not recovered from his relationship with Martha, a CIA secretary he seduced for information. Philip’s “marriage” to Martha is the show’s quintessential plotline for what it suggests: We can’t finally separate our intentions from our bodies. Philip and Martha exchanged an intimation of themselves more powerful than any intelligence that was gathered about the CIA. It turns out we think with more than our minds.

The fatigue is written on everyone’s faces when, in Season 4, Elizabeth, Philip, and Martha are under the same roof after all has been disclosed. It’s not simply Martha’s blank stare now that she knows she “married” a KGB spy. It’s also the hurt on Elizabeth’s face when she recognizes what her husband had to share to obtain information.

It’s easy to forget now, but in the series’ pilot episode, Philip comes onto Elizabeth in the kitchen. When she refuses him, Philip growls, “You’re my wife.”

She scowls back, “Really?”

They have two children and over a decade together, but by the end of that pilot episode something new happens in the Jennings’ relationship. Something not reducible to the lie they’ve committed to living.

Maybe the greatest threat isn’t that our beloved Russian protagonists might die, but that their marriage will end as if it, too, was a lie.

This is why “Darkroom” (5.10) is marvelous. Philip has a surprise for Elizabeth. When they arrive at an inconspicuous building, he takes off his glasses and hat to remove any disguise. He shows her the marriage license given to them before they moved to the States.

“Want to make it official?” he asks.

Inside, their handler’s priest awaits. “You will be married…” Father Andre says before he begins the secret Russian Orthodox ceremony, “…as for the state, whoever comes to Moscow first will have to file the paperwork.”

We get more than a glimpse of the proceedings. It’s as if everything halts to attend the secret ceremony. “This ritual cloth,” Father Andre says, “symbolizes the purity of intentions, and the road the newly married have to follow together.”

The road doesn’t get easier. This is evident by the end of “Darkroom.” They stare at the developing photos of pages from Pastor Tim’s journal that Paige obtained. They may be reading the pastor’s private journal in secret, but they discover that he is reading them. His verdict is that their lying is “monstrous.”

In the very next episode, they receive intelligence that a woman living in Boston might be “Anna,” a traitor who collaborated with Nazis during World War II. Assigned to kill her without assurance of her identity, the Jennings arrive at her doorstep to discover the truth. At gunpoint, Anna confesses her crimes in front of her American husband.

However, the Jennings discover that the truth isn’t as simple as the information they received. A new intelligence is uncovered when they meet Anna and her husband in person, when they learn her side of the story. When they see her beg for her life. When they hear her husband say to his wife, even after she has confessed, “I know you.”

With this new information, the Jennings hesitate. Eventually, Elizabeth completes the mission.

On the way home, she says, “I want to get out of here.” Intimacy cannot endure so much deception. The body knows.