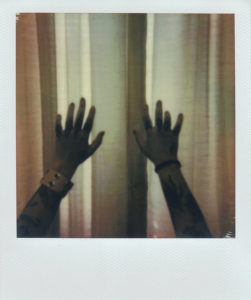 The expectation is universal: people want something succinct, a response that suspends their judgment, an answer that elicits both empathy and admiration.

Until recently, I had three tattoos, which meant that I had three mini-monologues with interchangeable elements depending on the age, faith, and literacy of the inquirer.

The first is a stick-and-poke jar on my left ankle. The second is a six-inch outline of a hazelnut plant on the length of my left forearm. And the third is a circle with a line through it, the size of a pencil’s end—housed in the bend between my hand and wrist.

What I tell a stranger at a party, when my tattoo serves as a silence-breaker:

What I tell my grandmother:

What I tell my father:

What I don’t say:

I am ready to inhale and smell new life springing up.

Claire Pearson is a recent graduate of Seattle Pacific University with a major in Creative Writing. She interned for Image during her junior year after studying abroad in Canterbury, England. She is returning there in the fall and hopes to pursue freelance writing opportunities before attending seminary.

Above image by Holly Lay, used with permission under a Creative Commons License.