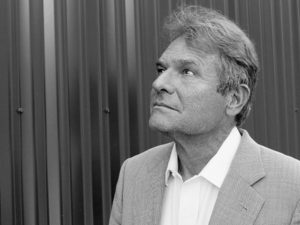 Denis Johnson died this past summer at the age of sixty-seven. Many have said that he was the single greatest writer of his generation, and the praise is warranted. Johnson, in a class with Kafka, Babel, Hamsun, and Lowry, wrote impossible novels: a dream-writer whose vision blended plain-prose with the arabesque, comedy with violence, death with grace, a hallucinatory balancing-act that always resulted in an astonishingly vivid realism.

Johnson’s characters were Sophoclean: they didn’t happen to the world so much as the world happened to them. Wonder, not merely entertainment, compelled them (and the reader) through the narratives: not the mystery of the “whodunit” so much as the mystery of one’s life pieced together in small, miraculous moments—in a naked divorcée, say, parasailing angel-like across the sky (“Work”), or in a conga-line of social rejects dancing across the mental ward, finally at home in the world (“Beverly Home”).

No one ever prised it out of Johnson just what sort of God or Jesus he put his faith in, or if he did. While his wife, accepting his 2007 National Book Award for Tree of Smoke, surprised the audience as a rather colorful evangelical, Johnson always evaded questions that sought an implicit theology at work in his fiction. “To me the writing is all one thing,” he once responded, “or maybe I should say it’s all nothing. The truth is, I just write sentences.”

The impulse to dispel lingering whiffs of the transcendent is a typically American one, but Johnson’s tendency was as much a part of his art as the revelatory moments that blew it asunder; in Johnsonian metaphysics, beauty is hard-won, if available at all, but it comes—through our struggles out of the abyss of addiction, poverty, or rejection, grace is granted, but grace, as those who have ever attended AA know (and Johnson was a decades-long member), is always a two-edged sword.

In one of the more poignant stories of his 1992 collection, Jesus’ Son, the principal character, FH (short for Fuck Head), and his girlfriend take a trip to the abortion clinic. Upset and confused, FH can’t resist a little righteous disdain. “So what did they stick up you?” he asks, as she lies recovering. She screams at him and the orderlies force him outside.

Later, his girlfriend shoots a pistol at him from across the dinner table, four bullets that miss. “It wasn’t my life she was after. It was more. She wanted to eat my heart and be lost in the desert with what she’d done, she wanted to fall on her knees and give birth from it, she wanted to hurt me as only a child can be hurt by its mother.” The story ends:

Note the choice of language: mother and father. The mysterious relation of things, the meanings we individually seek, rest nowhere as mysterious as in our moral relation: we make love together, we destroy love together. The title of the story, “Dirty Wedding,” hits us like a truth nailed over our heads: our marriage to God is never without casualties; FH’s epiphany is not a final redemption, or cosmic point of rest, but a road, suddenly clear, leading onto a much longer pilgrimage of repentance. In the grace of metanoia, the Holy Fool (FH ‘turned around’) must see all he has rendered backwards.

Throughout the 1990s, when Johnson turned to nonfiction, he pursued these complicated sorrows on a much larger scale, moving with Dantean vigor through any ring of hell that would grant him entry: Liberia, Kabul, Somalia, the American Midwest.

There were in these locations—metaphysical landscapes as much as geographical—a frightening gravitas (see, for instance, his encounter with President Charles Taylor), but always, too, an element entirely Fuckheadian: the expectation, always looming, that someone with a gun would soon discover the fool precisely where he shouldn’t be and deliver him a quick and unceremonious bullet. That that miraculously never occurred was an incredulity Johnson himself shared throughout the essays (indeed, “why has no one shot me yet?” might be the best description of his authorial tone).

But this alignment of horror with humor, if not exactly a foil, reveals something more important in Johnson’s journalism: of all these investigations and explorations, the true subject of the exposition is always his own vulnerability, placed out in front of him.

Never does Johnson distinguish himself from the evil and chaos he meets; on the contrary, he just as readily becomes another agent of it. Here he completes the heart-of-darkness orientation the gonzo-form has always seemed on a course toward (in Hunter Thompson and others). The monsters of the world can never be defeated without first confronting the monstrosity within—that, as Dante knew, is how you cover Hell.

I was reminded of these themes during election season last summer when certain literati (see, for instance, George Saunders’s piece here or Dave Egger’s here) travelled into the hangars and convention centers of the Trump campaign, trying—by taking a page out of the book of masters like Johnson or Thompson—to turn up gold. They each, however, mistook the alchemy and made moralizing expeditions of the journey, failing to see the black soul of the beast for refusing to implicate themselves in the darkness.

Johnson did no such moralizing. Indeed, his impulse was the very opposite. On assignment in Monrovia, set to interview Charles Taylor, he is suddenly faced with arrest. “My parents raised me,” he writes, “to love all the earth’s peoples. Three days in this zone and I could only just manage to hold myself back from screaming N*****s! N*****s! N*****s!”

You scarcely dare to go there with him—but you do. And it is this which makes the form so hauntingly effective: Marlow has to become Kurtz in order to defeat him; Johnson has to dehumanize Liberians before he can sit eye-to-eye with their great messianic pretender.

It is troubling that we have no Denis Johnson now to shine a light on the current impasses fragmenting culture. We might, as consolation, look to the example he has left us, but even that example is not immediately clear (e.g., bad addictions and sadistic travel habits). It takes prudence to read Johnson, to find through the great burning rush of prose the quieter voice that shapes it: that we must assume sin in order to forgive it, and to thereby be forgiven. Only penance lights the way home.

Jay Irwin is a high school philosophy teacher and a student of theology. He lives in Vancouver, B.C. with his wife, Jo, and two children, Emily and Charlie.