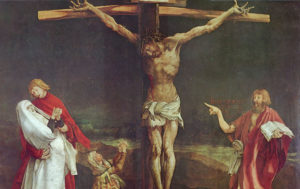 I love poems that stitch together memories from opposite ends of a lifetime, connecting them to our collective story in surprising ways. This poem feels dreamlike in its skill at just this kind of stitchwork. How simple Stelmach makes it look: take a phrase from poetry (commonly, arbitrarily) held as the most beautiful, and test that theory out. This could become gimmicky or superficial in less skilled hands. Yet instead of skimming the surface, Stelmach’s poem descends. The poet takes us past the sound of the words and into their physicality, into the “shiver and hush” of a cellar, that place of childhood curiosity and fear. Descending with her, as readers we encounter our own fears and uncertainties about mortality, and as Christians, about the mysteries of the Incarnation and Christ’s tomb. This is a powerful poem that will stay with you long after you finish reading it.

Years ago somebody decided—I don’t know how this conclusion was reached—that the most beautiful phrase in the English language was cellar door.
—Don DeLillo, interviewed in the Paris Review, 1993

———————–Two solid wooden doors hinged to open out
leaning on a sloping ledge against the house. Within,
a wooden stairway leading down into a space
unaccustomed to the sun.

———————–Entering there on the heels of an adult,
I watched an underworld emerge, lit by the gleam
of Mason jars, shelf on shelf, brass lids glowing
like halos casting light on shapes I only
slowly identified: apple butter,
pickled beets, preserves.

———————–Even in deepest summer I felt a chill,
breathing packed earth, softening wood. Solemnity
attended every entry, like the shiver and hush
I feel now on the threshold of a church
whose faith I do not follow, a faith
that seems, nonetheless,
to have expected me.

———————–For years, the doors remained too heavy.
Then one day I found I could, with all my strength,
angle one open, wedge a shoulder into its gap,
and worm myself inside—a feat to mark
a passage—until the door slammed
at my back and the world
went dark.

———————–For decades, this scene returned in dreams.
Except, in dreams, no one missed me, no one came
to search for me. Presumably, someone
came that day. Presumably,
I was saved.

———————–Or maybe this never happened. Maybe
this is a memory lifted from the etched frontispiece in
a children’s book, a story I wedged myself into
thinking there I’d be safe from slamming
doors of nightmares not my own.
I had my own.

ii. a sacrament / a sacrilege

———————–Walking the blacktop that runs behind the barn
past a gated graveyard, over a rail line and into the hills, I find
I’m numbering the dead: my own, the ones whose stones
are sinking in the churchyard, the road-kill corpses
along the shoulder, their blood deepening
to a shade indistinguishable by noon
from the road’s
usual oils.

———————–Today’s fresh kill is a vole. Splayed at my feet,
it spills a scarlet stream from its mouth past pointed teeth
and on to where, in the matted fur, the milk-white
organs glisten. Only the elegant feet remain
unstained. I try to read it as a portent,
but I read it poorly.

———————–My childhood God came down from the pastor’s
hand in a disk, parchment-thin, embossed with interwoven signs.
I held him on my tongue, pressed him tight to my palate
where a wash of waters softened the edges of his
perfect tissues—Christ in me, dissolving:
wafer, saliva, watered wine. My flesh
and his, indistinguishable—
the body’s darkness
and the world’s.

iii. a lavishing / a squandering

———————–It wasn’t long before his death, the woman
knelt to bathe his feet, toweling them dry with thick
sheets of hair, pouring over them costly scents:
emoluments suited to anoint the dead?
or oils that, if sold, would have
bought provisions for
the poor?

iv. a divination / a desecration

———————–Looking again for omens, I open at random
a book of poems and read one line: I came upon the torso
of a soul, words that conjure a standard cartoon ghost—
this morning’s vole, its pale shape rising from
a broken corpse, playing a cartoon harp,
feet dangling, claws opalescent,
with a tiny halo circling
its resurrected
skull.

———————–It’s written, when they lowered him from the cross,
not a bone was broken. It was women who knelt to bathe
the corpse: wounded feet, pierced chest, wrists
opened into gashes from the terrible
weight of human flesh
on nails.

———————–I was taught to kneel at the rail. To take and eat.
This is the torso of a soul born in the year zero to a task
whose weight even God’s anointed son
would need thirty years
to learn to bear.

Maybe this never happened / presumably,
I am saved. Even now, I could argue either way.
This is, nonetheless, my story still,
the words of it still beautiful:
cellar door / cellar door
the body’s darkness
and the world’s.

Marjorie Stelmach is the author of three previous volumes of poems: Night Drawings (awarded the 1994 Marianne Moore Prize), A History of Disappearance, and Bent upon Light (University of Tampa Press). Groups of her poems received the first Missouri Biennial Award and the first Chelsea Award; her awards include the Malahat Review Long Poem Contest and the Stanley Hanks Memorial Prize. A high school English teacher for 30 years, she has also served as visiting poet at the University of Missouri, St. Louis, and, most recently, as the director of the Howard Nemerov Writing Scholars Program at Washington University. Recent work has appeared in The Baltimore Review, Boulevard, The Cincinnati Review, Image, Kenyon Review Online, Prairie Schooner, River Styx, & Tampa Review.