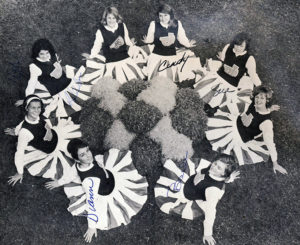 Last night I sat on the curb with my three youngest children, while my three eldest walked in the homecoming parade. My paraders each represented a different sport in their team jerseys and class colors. They walked in leagues of friends, shoulder to proud shoulder, sharing the inside jokes of those in the social center, tossing out Smarties and Laffy Taffy to townie kids who scrambled and wrestled in unbecoming ways for the toss offs.

My son, who is on the autism spectrum, garnered more direct hits of candy than any of my other kids, as people yelled “Duffy!” affectionately, and made sure the candy got into his bag. He is their mascot, which is a phenomenon I’ve noticed before—that he gives other people easy opportunity to feel benevolent. And believe me, he would far rather be the kid on the curb accumulating piles of candy than walking two miles giving his candy away.

It struck me how in small towns, especially, it’s easy for the cult of the teenager to foment until all the adults in town are living their lives—or at least their weekends— around entitled young adults whose brains are several years away from full maturation.

When I was in high school, there were always one or two parents willing to let their home be a teen hangout. Everyone knew they were always welcome at Gina’s house, which had both a pool and a hot tub. We all knew the code to open their garage, and once inside, whether Gina’s parents were there or not, we could always find homemade chocolate chip cookies.

Is it embarrassing to admit that I was also a cheerleader, charged with painting banners, and leading pep rallies, and wearing short skirts on game days, all for the glorious high purpose of creating school spirit? Trying to create positive winning energy from a bunch of apathetic high schoolers is hard work which requires lots of yelling, and many jumps and flicks of the pom-poms, and still you get the idea that what you think your purpose is as a cheerleader is not what everyone in the stands thinks your purpose is.

I also thought that winning was a big deal, and that leagues where there were no winners or losers were for pussies, and that they signaled the crumbling of society because we were too scared to ever let anyone experience a blow to their self esteem.

For myself, these days, trying to make sure that every loser realizes that they’re not entitled to anything good, that they deserve no self esteem—it’s just more ill will than I can muster anymore.

I also find it harder and harder to cheer for the able bodied, for the ones with access, for the tanned homecoming queens perched atop convertibles, for the ones whose parents will spare no expense or inconvenience.

Other people’s surpluses of self esteem are not my business—but having been among them at seventeen, I remember secretly wishing I could get pregnant, or something just to have meaning in my life.

Sometimes now I feel guilty as a mother because I chose God as a reference point for most of my adult decisions. I chose to follow a religion that encourages larger than average families, for instance, and now I’m tired, and we couldn’t afford to be the exciting teen hangout, even if I wanted a bunch of neighborhood kids entering our domain, eating our food, and dictating to my husband and me, and our kids, how to live.

Some other family will supply the swimming pools, fire-pits, basketball hoops, and cookies, which means inevitably, that some other mother will be keeping an eye on my kids, presuming I allow mine the same freedoms I enjoyed at their age.

If I am still keeping God as my reference, my subversive duty now as a mother is to call my children away from the crowd occasionally, into a silent sanctuary, where no one will cheer for them, or throw them candy; where they have to dress with reverence, and fast before entering, and kneel beside one another as equals before the God, I tell them, who made each one of them with love, forethought, and intention.

This God asks you to follow in his footsteps, and in his parade, he was spat on and shamed, while he carried wood on bloody shoulders, ultimately, to his death in an act of incomprehensible benevolence. His whole life was wreathed in pain, humility, and death at the hands of people who laughed at him and excluded him from the company of the righteous.

My children don’t like it that I keep requiring their presence in this sanctuary. Every Sunday they drag their feet getting ready and fight over seats in the car. I have no pom-poms to wave at them or bleachers to stomp, so I lay on the car horn and threaten to ground them if they’re not in the car on time.

Sometimes it doesn’t seem worth the fight—there are easier ways to live. But the fight is for meaning, I tell myself.

Oh please, my beloved children, see that it’s okay to feel a little detachment from these strange cultural honorifics for the beautiful, so that when this year’s quarterback and homecoming queen are replaced by the next, when everyone has left this town and come back again, and some are still beautiful while others are sad—you will know that your dignity has always been wrapped up with one another’s—not because of hierarchies of approval, but because you are brothers and sisters under the parentage of the Lord of All.