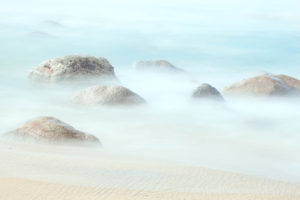 When I finish being born for the fourth time, I will live in a house by the sea. The windows facing the ocean will hold the ocean, as much as glass can hold. The phone will vibrate with messages of peace.

There will still be a trashcan: everything that lives creates waste. This trashcan will be streaked with the oils of summer, the waste of dreams of vacationers who have been returned to their routine of dying a little every minute at their jobs. Those who, at night, when they cannot sleep, fantasize about limbo, its lotions, its calendar filled with absence—no meetings at dawn, midday, dusk.

It’s a source of comfort now, the open blocks of the calendar’s grid, no longer the dreaded response to the question, what is my day like, my life? For a few hours, maybe, a day or two after their bodies have finished dying, their souls will linger, the water, sand, light of earth still theirs to behold. Then, a puff of wind and the souls are no more.

But for me, for now, the awful process of being born for the fourth time—or is it the fifth or sixth?—continues.

The first birth: that was easy. I slid into a world in which everything glistened was fully itself, not yet reduced, squeezed, into its name: hot, ball, mama…. Language acquisition: it gave me the illusion of power, a certain kind of power, at the same time it destroyed my connection to the oneness of life.

The first birth: It happened without me, without everything that I would gather to build the hut of what would gradually come to be called “me”. The story of “me”: One part separation, one part charm, one part doubt, one part luck, one part heat.

After I discovered hot sauce, I wanted everything to burn me, to obliterate the salts and vinegars of experience, “my” experiences, as I had learned to call them.

Claiming experiences as my own: it was an acquired skill, taught to me by I know not who. It did not take long before it felt natural, an instinct encoded into me by whomever and whatever designed me.

My freedom: 1968, fifteen-years-old, hitchhiking with the Jefferson Airplane’s housekeeper on Pacific Coast Highway from Malibu to Big Sur.

My uniqueness: 1983, bilateral aorta to femoral bypass around the inflamed section of the aorta that limited blood on its journey down my legs toward my toes. Just thirty, I was a “rare case,” a curiosity for doctors and medical students to intrude on as I lay in the hospital bed, the frosted over Christmas window overlooking the empty parking lot. I was their holiday, their specimen.

The second birth: In 1976 in Israel I became a nation, a people.

The concurrent third and fourth births: I became a state educating its citizens; I became a husband, stepfather, father. It was 1989, and I expanded and contracted, I became harder and more tender, I learned to walk while looking behind me as I went.

Now I am being born again.

When I finish being born into life again, the hills will be brought low—like the psalmist says—slopes will be leveled, the better for bicycle wheels to roll like love, waves will swell and lift the body to new heights. There will be time, there will be time to live without answers, and in the place of the awful need of answers, joy in a life of never ending curiosity.

Yesterday, I continued the torturous work of being born another time in this life.

It was Yom Kippur, and I donned the traditional kittel, the white gown that is now more shroud than groom’s robe. I invited its name, kittel, and its symbolic meanings to fall away from it, that it could be, for one full sacred day, simply, purely, what it is. And, as is our practice, I denied myself food and drink and sex for twenty-six hours, and affirmed that by spirit alone is a human born, by spirit alone given a chance to taste life on earth.

May I survive this delivery into life. May I live to experience wind freed of “wind,” love freed of “love.” May I live for the day when “I,” “me,” and “mine” are empty, like the sleeve of the jacket of self that will hang in the closet for my children and wife, after the death of “father” and “husband,” to lift to their noses for the scent “father” and “husband” left behind.

May I—alive now within and beyond my “I”—gather with them at the closet and in the room in which so many things once hidden behind their names, reveal themselves in their unnamed states, naked and tender and true.

May we behold each other, all those who are lovely and precious and dear as life on the first day of the first birth.

Richard Chess is the author of four books of poetry, Love Nailed to the Doorpost (University of Tampa Press 2017), Tekiah, Chair in the Desert, and Third Temple, all from University of Tampa Press. Poems of his have appeared in Telling and Remembering: A Century of American Jewish Poetry, Bearing the Mystery: Twenty Years of IMAGE, and Best Spiritual Writing 2005. He is the Roy Carroll Professor of Honors Arts and Sciences at the University of North Carolina at Asheville. He is also the director of UNC Asheville’s Center for Jewish Studies. He is also the Chair of UNC Asheville’s English Department. You can find more information at www.richardchess.com.