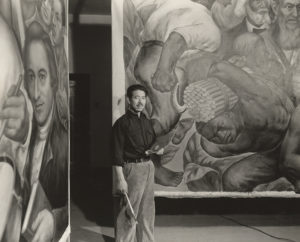 In a long room with three doorways in Tokyo’s National Museum of Modern Art, somewhere in the humming midgut of the building, hangs an oil painting of a man’s arm holding a hammer above a length of chain. In front of the painting about three paces away is a twenty-two-year-old girl (her wording) who’s spent the past four months studying legislation for the prosecution of rape as a war crime during the Yugoslav Wars. About eight paces directly behind her is a museum guard, a man with a strange light in his eyes as if suffering a migraine.

The girl has a backache and wears a grey wool coat. To the guard, she’s a shadow in his line of vision, haloed by the oxidized reds and browns of Eitaro Ishigaki’s Undefeated Arm.

Eitaro Ishigaki was a man, a painter, Japanese, and then an American Issei who was deported, and Japanese once more. He was married to a woman named Ayako.

Eitaro Ishigaki painted a mural on the Harlem Courthouse as part of a Works Progress Administration project. A radical, a leftist, revolutionary, and communist, Undefeated Arm was his first revolutionary painting, a step away from street scenes toward the muscle-bound laborer arising.

Is it ever possible to know someone?  The more you look at and know a person, the more the gaze and the words break down. A cruelty can coil around compassion, vileness spiral about unbelievable love. An entire life is lived inward. A glance of it like glitter on the eyelid might be caught by another, the rest untrespassed.

Art historian ShiPu Wang is studying Ishigaki as part of a project on American artists overlooked because they were Asian. So little is known of Ishigaki. I wonder what Dr. Wang will find: letters, photos, brief words at a funeral, the long-lost or discarded material minutiae produced during one man’s life.

I wonder how Wang will know him, if there can be one Ishigaki, unknown, and multiple Eitaros imprinted on a gaze toward what the painter left behind.

When you place a trinity in alignment—in syzygy—its inner workings are revealed in an elegant way, the miracle of precision, of things that organize themselves just so. And there must be three to render the relationship as both a rare oneness and a puzzle whose dancing distribution of effects will forever be indeterminable as a system.

When the girl returns to the United States, she’ll have no knowledge of Ishigaki’s life or his other paintings: Man on the Horse, Whipping, Standing Woman, Flight, Two-Story Bus, The Noose. She’s not sure it matters; some stories look nothing like stories. Some stories are only objects placed in alignment.

The girl walks from the law library where she studies the progression of sexual assault as a war crime—its designation as slavery, then torture, crime against humanity, and condition for genocide. It’s a quiet walk on a campus that smells of linden and burnt oak leaves. The stars are out, and the air carries a chill.

And she carries…what does she carry? A stone in her belly though she’ll never know what to call it, this new organ that grows in weight with each text she annotates.

She loves her work, is proud of it, enjoys the righteous puzzle of it. She can be so quiet that the librarians turn the lights off around her nearly every night.

Ishigaki was consumed by his witness of violence. He spoke vehemently against the Empire of Japan and its actions during the Second Sino-Japanese War. He watched the racist hate and class exploitation in the United States; he saw the Enola Gay imprint flesh onto concrete. He considered the beaten human, the ionized human. He saw what the less-than-human can easily become, how universes inside each individual could disappear en masse.

He was deported to Japan in 1951 and died seven years later. In 2013, the Museum of Modern Art, Wakayama, in the prefecture of his birth, held a retrospective that focused on the line between his placid and revolutionary work, asking what happened to change how he viewed the people he painted. All his many, perpetual exiles.

Texts criticize Ishigaki for his strong men, his weak women. Men all bulging muscle, bodies laboring in agonistic convexities. The women suffer the weight of all the wars in their eyes while the men flex. One writer calls Undefeated Arm a symbol of male violence.

The girl presents her Yugoslav research at a conference. She remembers the earnest gazes of the women, the flinches from the men. She’ll feel bad for it, for upsetting the men with her research and all the words for what people keep allowing to happen. Later, she’ll wonder at the uselessness of a flinch, the obstacle of a flinch to ending anguish, and she’ll stop feeling bad.

She’ll say girl instead of woman, because the word girl carries the demand for girl, the devourings of girl, all the bullseyes.

That’s what Eitaro’s arm is, she realizes—that strong man’s arm that could hurt somebody so easily but instead gets to work. It’s the non-flinch, a gaze directly back.

Later she’ll think of the arm as an icon, the colors and that inner glow, oxides that mean “from dust you came.” In all the ways that count, the painting is as alive as its maker once was, living in its thrumming triad with girl and guard. The arm carries some savior in its its heft, but the girl will probably never have the right word for any savior. The closest she can get is confluence—events or objects aligned in a rare oneness.

And she carries…what does she carry? She stands over and over again in the room with three doorways. The arm, the girl, the guard: Eitaro, syzygy. What are they all looking at? What water squeezed from stone?

Natalie Vestin is a health scientist and writer from Saint Paul. Her essays have appeared in The Normal School, Iowa Review, Prairie Schooner, and elsewhere. Her nonfiction chapbook Shine a Light, the Light Won’t Pass was published by Miel Books, and her fiction and photography chapbook, Gomorrah, Baby, was published by Anchor & Plume in November 2016.