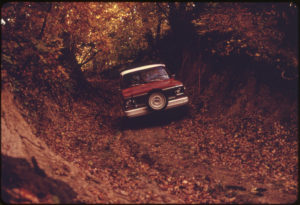 This post originally appeared at Good Letters on May 9, 2012.

Dayne, my mother’s ex-boyfriend, spent his childhood in Tennessee, where he got his southern drawl and where his father, who drank, would stomp through the house and sweep his long arm across the crowded kitchen counter smashing greasy dishes onto the linoleum. It was a habit that followed their family on the move to Sauk Village, to Jeffrey Street, where Dayne’s father bought a house and kept rusting car frames in the driveway.

The bodies of those cars were still there during the winter of my parents’ divorce, when Mom would take us to Dayne’s mother’s house on our way to the grocery store or the gas station. “I’m just gonna run in and say hello, and we’ll be on our way,” she would say, the stereo blasting Blur and Stone Temple Pilots, Scott Weiland’s baritone screech shaking the seats of the car. After twenty minutes, Dayne would appear in the doorway, his skin reddened from driving jackhammers and drinking Miller Lites in the sun.

“Sit in the back, honey,” Mom would say to me, opening the car door. “Dayne needs the leg room.”

As I slammed back the car seat, Dayne stepped out the screen door, smoothing his scraggled curls with his red hands. “He looks so much like his father,” my mother would say, her voice thickening as she watched him put on his black leather jacket, watched the quick sweep of his arm into the sleeve.

Dayne was not the reason my parents split up. They had been falling apart for years, and in the fall of 1998, things fell apart for good. One morning my father’s closet was empty, and for the next few weeks we lived on frozen pizza, my mother’s car parked on Jeffrey Street.

We knew that it was not Dayne’s fault, but in the spirit of our sarcastic father, my brother, sister, and I made fun of Dayne all the time. When Dayne permed his hair in Mom’s bathroom, we made jokes about mullets behind his back; when he told us that he could dance “like a black boy,” we snickered at the way he shook his hips. It distanced us from him as he sat at the kitchen table and drank his morning beer.

And it connected us to our father, who had moved to Chicago and didn’t have a cell phone, who used calling cards at phone booths, who told us to keep it up and to not worry, that we would see him soon, that he would get us back.

When we hung up the phone, our father’s insults would repeat in our heads as we looked at the kitchen table, as Mom wrapped her arms around Dayne’s neck. Twit. Mouth breathing moron. Son of a bitch.

Dayne was a man who grew up on food stamps and goodwill bins, and I might have been inclined to pity his clothes, or the way he baked steak with seasoning salt from the dollar store, if he hadn’t been so intent on making us fear him, if he hadn’t fought with my mother while we circled a hotel parking lot. That long arm stretched across the gearshift while she tried to drive, the car jerking, my brother and sister and me stone silent in the back seat.

Dayne felt like a force of nature, a curse returned upon us, someone who manifested the spiritual legacy of where we lived, south of Chicago: a legacy of reoccurring loss, of patterns that never lost their hold.

Every time my mother mentioned breaking up with him, every time he left a bruise or a hole in the drywall, I would sing his vices to my mother, her thin soft fingers shaking between mine. I would remind her––remember the steel boot in your eye? Remember how terrible it has been?

Dayne eventually left my mother. She wept for weeks, and never heard from him again. But my sister and I saw him years later, when I was home from college, filling up my gas tank at the local BP. He walked through the gas station doors and stared straight into my car, skin still red, hair grayed and white. He was not yet fifty years old.

“That’s him,” my sister breathed, settling into her coat. “That’s Dayne.”

He stared at us, quiet and intent; then lifted a gloved hand. He looked remorseful, or lonely, and after he raised his arm he walked into the neighborhood and slipped beneath a fence. It was as if the landscape pressed him into itself, as if he had been some movable part, tossed by a whim into our lives, our afternoon.

What loss held his life, I could not tell. And to say “I forgive you” feels too quick, too simple, for the patterns he forces my family to hold still.

But I cannot shake the image of him waving, the stretch of his arm, more gentle than I had ever seen it, a palm gesturing upward, a sign of something I could not throw aside easily. He slipped into the neighborhood and was gone. Vanished into trees, history, the graying snow.

I remember how terrible he was. And I look for the hold of a new pattern, one that releases and sets free.