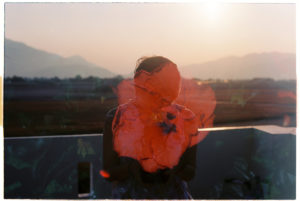 My companions and I had overstayed our moment in the bishop’s suite, which was by now devoid of beer, wine, tequila, and perhaps wisdom.

We decided to meet outside the hotel for a cigarette. On the way down, the bishop’s assistant, a young man in his twenties, asked about my music. My ensemble was going to perform the following night.

I was pleasant, because I knew cursorily that he also played guitar and claimed to be a fan of my band, so when he asked what kind of guitar I played, I said, “Oh, I have a good guitar and it deserves to be played by someone who really knows how to use it.” Which is true.

I was among friends, some of whom I’ve known for years, and the conference had a Christian character, which at my age (over forty) I took as a safety net for meaningful conversations with my Christian brothers and sisters—our interactions protected by covenants of marriage and belief in God.

I suppose I’d just made a case for the sexual prowess of women, but the assistant seemed like a child to me. I could’ve been his mother. And he had a new baby and a wife at home.

So I didn’t think twice when he asked for my key as our group walked back to our sleeping quarters. We needed a key to enter the building, and I thought he wanted to open the door. But, strangely, he handed it back immediately.

He got off the elevator on his floor.

I rode with the women to our floor, changed into my pajamas in my room, and propped the door open when I went to the restroom down the hall. I was washing my face when the young man walked in.

“What the fuck are you doing here?” I asked, though I didn’t wait for an answer. “You’ve got me wrong. That’s not who I am.”

I escorted him back to the elevator. He was sheepish but didn’t protest.

And then I was left with my thoughts: Had he just booty called me?

He didn’t even try to avoid me the next day, though I avoided him, realizing he got my room number when he asked for my key. I was disgusted.

After lunch, he sought me out again. “Sorry for being such a creeper last night,” he said, which left no question as to his intention. He was sorry at least. That evening, when he sat down beside me at a presentation, I left the room.

My mojo was gone by then, because if I had encouraged him, I’d done it unwittingly, and I felt guilty for even having partially articulated a controversial idea of feminine sexuality in mixed company.

I’d wanted to think I was just being myself in my element, which in the light of day, suddenly felt dangerous. My grand theory of inhabiting one’s full self had only engendered unwanted advances.

Maybe it wasn’t possible, but was as I feared: You must suppress. Do not be whole. Be docile, veiled, silent, trapped in the world machismo made.

I felt leery of going onstage that night, exhibiting myself yet again.

My band mate said, “Look, none of that was your fault. You’re strong, you’re smart, and you’re beautiful, so of course little men are going to want to drink from that well, but too fucking bad. He’s a predator. Clearly, he’s done things like that before, and will do it again. That doesn’t make you guilty. You shut that thing down as soon as you recognized it.”

But the whole experience left a bad taste—for my church, unfortunately, where I’ve spent my entire adult life trying to recognize myself as a daughter of God, trying to be faithful to teachings that ask me to be open to having many children and supportive and faithful to my husband.

This fidelity often requires the sacrifice of my own desires, plans, and elements of my personality, not only for my children, but for my husband’s career, and our material needs. I do it willingly.

The irony is not lost on me, that the few times I’ve ventured away from home since becoming a mother, I’ve encountered churchmen who, for one reason or another, seem hell bent on urging me back to my cloister in order to scrupulously veil and guard my secreted self.

One of those churchmen even decided that my presence was an invitation to acquire something I was not offering. Machismo is nearly always about controlling women, whether in their absence or their presence.

As some time has passed since the conference, I feel now more than ever my initial impulse to lay claim to my wholeness.

It occurs to me that feminine sexual power is less an invitation or an act of leverage over others, than the ability to embody oneself in totus while retaining the agency to reject any unwanted claims others— including the church—may make on that embodiment.

The world doesn’t need a feminine corollary to machismo when machismo uses masculine sexual strength to disempower, control, and sequester other voices. The body of Christ needs to suppress machismo, wherever it rears its head; and it needs a feminine strength that refuses to retain the shame of how she is made.

Jesus suffered and died for the daughters of the church to be whole, unafraid, and full of grace. I cling to that grace wherever I can find it.