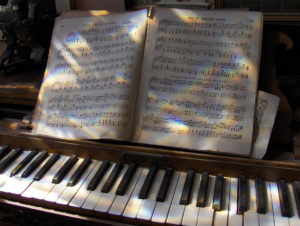 The first movement, “Regard du Père,” comprises simple chords that build harmonic complexity interspersed with Messaien’s predilection for semiquavers, sixteenth notes with a dainty name that belies their barbarism. A semiquaver feels to me like someone reaching into my adrenal glands and giving a good squeeze.

You can listen to pianist Yvonne Loriod (Messiaen’s wife) play the full two hours of the “Vingt regards” on YouTube, which is what I’ve been doing, though the piece still makes me cringe in its inability to be comprehended, as I experience dizzying spaciousness as if sitting in an expanding room intent on my insignificance.

I’ve been playing the piano lately, or rather, returning to pieces I’ve learned to enjoy how they’ve lived in my hands all these years (Modest Mussorgsky’s “Pictures at an Exhibition”), and learning new compositions (Beethoven’s Piano Sonata No. 7 in D Major) to enjoy the devotion to hard creative work.

In Bradford Morrow’s new novel The Prague Sonata, pianist Meta Taverner argues about her quest to identify the provenance of a mysterious Czech manuscript, “It’s not about religion. It’s about devotion and responsibility,” to which her mentor replies, “That’s the very definition of religion, isn’t it?”

And I believe this, that devotion and responsibility to art build culture, and that culture builds walls against indifference that threatens faith.

I thought as a teen that I would dedicate my entire life to the piano. Being tone-deaf after losing my hearing for a year as a child, I had no ear for music, but I could interpret it elsewhere in my body. I could carry a piece in my muscle and connective tissue, and I could interpret it through the bodies of others.

My mother constantly requested that I play Beethoven’s Piano Sonata No. 17 in D Minor. A soft staccato to begin—a few plump droplets exploding into a coating sheen. Then low chords, a seductive lulling, a growl before the tonic extends and shatters itself in impossible formations—impossible until, as I overstretched my hands, my ligaments grew loose in an allowance of harm.

I played and my mother went into the basement night after night to break her own fingers, her wrists, her arms that created beautiful paintings. I played countless times when my father and mother left for the emergency room. I played and played, not knowing what else to do and unable to stop.

My music could salve wounds and also cause them. I think this might be true, but also that it doesn’t make sense. I wanted to to see how bad the breakage could be, because I wanted to know if it was real. I wanted to say to my teachers and her friends, my mother breaks her bones, but when I thought about it, the reality of it seemed ridiculous. I never cried, only played.

I saw the pianist Zlata Chochiva perform several weeks ago. It sounds silly to say, but I’ve loved her since seeing her perform the Bach French Suites, loved her by watching her love the music through the seiche in her brow.

She played Chopin’s twelve etudes, and it was strange to feel in my body the struggle to play along with her, the small twitches and starts. My body knew the etudes pocketed away in its joints even if it lacked her skill.

In Chopin, a slackening of the arms as if they’re doing no work. Curve of light like a Viking longboat setting sail against the underside of Chochieva’s forearm, half-moon bracketing her elbow’s olecranon. Though her posture is still, I can sense Chochieva falling into the music and blurring the borders between her body and what it is now playing.

I know that memorizing music and being able to summon it in my body at will forms a marriage of flesh and tone that can never be dissolved. Once a pianist has memorized the etudes, she and the music will belong to each other forever.

Chopin, more than anyone, knew how creation is an act of acquiescence. Beethoven could summon the ultraviolence, could even be accused of using his compositions to gird the bloodlust of the French Revolution. But Chopin is a Ecclesiastical paradox: a time to kill and a time to heal.

I watch Chochieva’s hand slide off and up the keys, then the hand drawn back. The Chopin stitch. Marriage of violence and what heals it. Marriage of healing and what it loves to staunch.

And the question that’s kept me hesitant with the piano for years: What if I hurt my mother? What if I liked hurting my mother because it meant I played well, meant I could conjure a storm from my hands?

There exists in art and faith a tug between good and evil, between being devoured by devotion that gives oneself away to something beautiful, and being devoured by the power of one’s own easy incandescence. I know my own adoration of dedication feeds my faith in God, yet rarely shows a balanced face, a face not choked with the hubris of wondering how powerfully I might be able to affect and command others.

I have no answer. I know through listening to and attempting to play the “Vingt regards” that faith in God as creator, as savior, leads neither toward harm nor solace. Both faith and art are, rather, grand irresolutions, perpetual anxieties that themselves are saviors in their abolishment of theological and aesthetic certainties that so often are willing to carry harm to others.

In the New York Times interview, Osborne recounts a converation with Loriod about the “Vingt regards” and its “slow repeating chords—endlessly, it seems. There’s a big temptation to try and somehow shape it. And she [Loriod] said, ‘No absolutely don’t do that. That’s a vision of God and God is eternal.'”