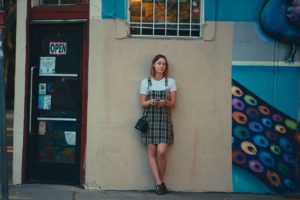 I graduated from Bellefonte Area High School in 2004. During my senior year, I indulged my role as a star basketball player, taking in all of the attention that came with it. I was careful, though, to reject the label of jock because I didn’t want to be perceived that way.

I noticed the eyes on me during warm-ups, during the winning plays of a game, and in the hallways the day after a win. I tried to ignore those same eyes when our playoff game ended with a loss, and I had zero points.

A couple of months after the season ended a movie drew my attention in a way that no other movie had before. I became so obsessed with it that I saw it twice in the theater, and then convinced my Media Literacy teacher to organize a class field trip to see it.

That movie was Eternal Sunshine of the Spotless Mind (more on this film later).

I thought about all of this during and since seeing Greta Gerwig’s much celebrated directorial debut Lady Bird, which takes place convincingly in 2002. This film is many things at once: a mother-daughter story, a coming-of-age comedy, a post-9/11 film, a tribute to Sacramento, an early aughts memoir. Primarily, though, Lady Bird’s vision reveals the complex ways that we play roles to receive the attention that we think will make us feel loved and alive.

Like the priest delivering a homily at Lady Bird’s Catholic high school, we can also put it in terms of what we fear: We fear that we’ll never escape our past, we won’t be liked, and we won’t succeed. Lady Bird is filtered through the primary concern of the roles we play to receive the attention necessary to form an identity. If Christine “Lady Bird” McPherson takes any flight by the end of this film, I think it is against a horizon of significance that is surprisingly Catholic.

Christine McPherson demands that everyone, including her family, refer to her as “Lady Bird.” Lady Bird has a “performative streak.” In one sense, this is obvious insofar as she will decide to join a local drama troupe to perform in a school musical.

In another sense, she has an everyday flare for the dramatic like many teenagers. Part of what makes Lady Bird insightful, though, is how it is keenly aware that while roleplaying an identity in pursuit of satisfactory self-definition may be more overt in high school, it’s not something we stop doing as we grow older.

There’s also something of an elemental conflict in Christine’s desire to be referred to as Lady Bird. When the judges at the theatre program’s audition ask if that’s her given name, she becomes exasperated: “Yes, it’s my given name. It’s given to me BY ME!”

Lady Bird is convinced that she will form her identity without the burdens and impositions of external influence. This is where both the comedy and the drama come in.

The comedy is in the irony that while Lady Bird wishes for the sort of autonomy that refuses the name given by her parents, she is too easily willing to conform to the external standards set by her peers. For instance, after cool girl Jenna is rebuked by Sister Sarah Joan for having too short of a skirt, Lady Bird lunges for an obscenity to derisively name the sister behind her back to impress Jenna, even when Lady Bird likes Sister Sarah.

When new boyfriend and cool kid Kyle approvingly refers to Lady Bird as “totally anarchist,” she fulfills that role by replying that she’s going to kill his parents that weekend. The joke falls flat with Kyle because his dad’s dying of cancer. It doesn’t fall flat with us because the humor lies in the fact that Lady Bird is outfitted in an identity that doesn’t fit her.

The film also explores the dramatic stakes in how we shape others’ perception of us in our pursuit of loving attention: Lady Bird discovers that her first boyfriend is Catholic and in the closet and brokenhearted by it; her father, who lost his job, has been depressed for months while putting on a brave face; when Lady Bird tells Kyle that she’s a virgin in the middle of an initial sexual encounter, Kyle tells her that he’s also a virgin when he isn’t; Lady Bird tells Jenna that a beautiful house she’s long wanted is actually her family’s; the director of Lady Bird’s musical sulks in the realization that his audience doesn’t understand what they’re watching; Lady Bird’s mother demands that the family give the impression that everything is neat and organized so that her husband is more likely to become employed again. Examples abound.

It’s also through this lens that Lady Bird makes sense as a post-9/11 film. News broadcasts of the war in Iraq play in the background of countless shots. Televised news wielded considerable influence in shaping citizens’ views, representing events for a particular perception.

Another, more particular example also reveals how a film can evolve based on the cultural context we bring to it. There’s footage from 2002 of Matt Lauer as one of our trusted news sources. The first time I saw the film was prior to the revelation of sexual harassment claims against him, and his presence wasn’t noticeable; the second time I saw the film was after his scandal, and there were audible gasps and chuckled realization.

This Lauer anecdote suggests something else I’ll explore further tomorrow: In the end, we (whether a nation or a person) cannot inhabit a disjunction between reality and the identity we construct.