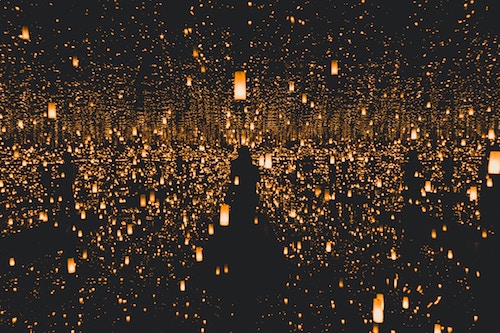 Over Thanksgiving, my sister and I spoke of transitions. We’re both susceptible to periods of high and illogical anxiety. She said how, as a teen, she was able to make the anxiety wax and wane through transitions: going home from school for the summer or for vacations, returning to college, starting her summer job.

These felt like big shifts, a return not only to a space but also to the person that space recalled. And in adulthood, because she lives in her hometown near the forests she loves and that recall her to herself, she lacks the small epiphanies—the possibilities brought about by change—that allow her to heal.

As I’m writing this, my mom lies sedated on a ventilator in an ICU two hours north, and I struggle around under the weight of what feels to be twenty lead X-ray vests, and funny somehow how this is an image used to diagnose people with depression—are you under a single lead vest or twenty?

If I were depressed or sick, I’d seek help, but I can’t go to the doctor to prevent harm to another person. I don’t know what will happen, but I know all the data surrounding what could happen. And it’s this I’m struggling with: the possibility that salvation is only ours to receive and never to give.

In a 2017 paper published in Nature, Chong Chen, PhD, et al found that when colonies of the bacteria Escherichia coli grew and formed groups of thousands of cells in a petri dish, they began oscillating to form patterns and shapes.

One of Chen’s areas of research is “active matter,” which involves studying how individual movements can look like ordered patterns when they occur en masse. Though the individual cells behave erratically, an almost artistic order emerges when they move as a group.

People used to the think that the ordered behavior of groups—a starling murmuration, a flock of geese in a V—was evidence of a group soul, a presiding and all-encompassing spirit that ran through all individuals of a species or community, holding them together, making them brilliantly visible as they re-enacted the divinity thrumming through the universe.

As a physicist, Chen seems cautious of assuming that biology works in patterns. When applied to living beings, patterns—the life-blood of physics and mathematics—are typically evidence of an observer who wants to be satisfied by a world that makes sense.

And it’s dangerous to see order because you want an ordered God or a conscious evolution ever-evaluating or a universe that grants and denies wishes. It’s easy to view epiphany as a struggle out of blindness toward an explanatory and illusory illumination.

I’m frequently unnerved by how many scientific epiphanies appear to be, not flashes of inspiration, but objects placed in close association, each revealing the truth of the other:

Einstein gazing at the Zytglogge clock tower in Bern while imagining what would happen to time in the tower and on his wrist if his streetcar zoomed away at the speed of light; the revelation during the heyday of the hydraulic-happy Industrial Revolution that the heart serves as a pump; the understanding of the brain as a computer that files and stores and processes grown during the computer-science revolution of the 1960s.

I’m unsettled by this because I can see how an epiphany is also a blinding, a blind spot grasped wholeheartedly. When we see and accept the heart as a pump and the brain as a processor we’ve got hold of some truth, but what wealth of possibilities have we ignored with our seeing?

I can see God’s compassion bestowed on the most vulnerable and the hurting and God’s attentive blindness crashing down on the loudmouthed future-apostle gunning for Syria, and I’m worried I understand nothing.

Epiphany can be an illumination that blots out and a blindness that holds space for all possibilities, each according to her needs.

Though epiphany is also Dylan Thomas raging next to T.S. Eliot’s journeying magi, each poet puzzled at seeing the heart of something they couldn’t understand:

“Grown men, near death, who see with blinding sight / Blind eyes could blaze like meteors and be gay….”

“I had seen birth and death, / But had thought they were different; this Birth was  /Hard and bitter agony for us, like Death, our death.”

I’m a researcher and not a clinician. By this I mean that I am one of the smartest and most useless people I know. I know the data on my mother’s condition, all the gold-standard diagnoses and treatments, but it doesn’t matter.

Population data—success rate, outcome, mortality—always breaks down at the individual level, a fact that gives us miracles and nightmares and all unexpected exhaustions and transformations when someone we love is ill.

I think often of Eliot’s smart and useless magi journeying in the confusion of their faith, balancing despairingly on the precipice of epiphany:

“At the end we preferred to travel all night, / Sleeping in snatches, / With the voices singing in our ears, saying / That this was all folly.”

Perhaps. Folly’s alright. Sometimes you can’t see a damn thing for the folly and that’s God too, stepping forward with an attentive blindness.

I should end this well, right? I should tell you that my mom will be fine, that my sister found an extraordinary calm in the heart of the forest, that God heals the sick and turns the loudmouthed haters into letter-writers, that the magi realized what they had to say to the world wasn’t so useless, that Dr. Chen’s E coli were exhibiting the ordered phase transitions that govern so much of matter’s behavior, that I can see now how it all makes sense.

And all of that would hold a little bit of truth and I’d be grateful for it. I’d feel so satisfied to have the X-ray vests removed and the possible inside worlds forever hidden.