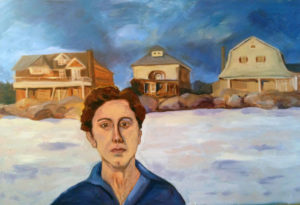 The sun rises over the ocean where I live, two miles from the Atlantic. You can watch it set over the bay too if you’re lucky enough, at sundown, to be on the thin barrier island that separates the mainland from the sea.

The water here in the mid-Atlantic region isn’t the spectacular aqua, teal, or turquoise of our southern and western shores. It’s grey-green, tinged with brown when clouds obscure the sun or rough seas churn up sand and silt.

To the postcard-trained eye, it’s ugly. To the scientist, it’s an abundance of phytoplankton and other nutrients. To me, it’s refreshment on a sweltering day. It’s peace, sitting on shell-flecked sand listening to the surf. It’s beauty, baking dangerously into my skin while I escape in a world of fiction. It’s home.

The horizon line is an afterthought. Ships appear there sometimes as silhouettes, but never come close or retreat or move. One day they’re there; the next, they’re gone. The world drops off into an abyss beyond them. Everything that matters happens in proximity to where I sit.

In my half-century on Earth, I’ve only risen early to watch the sun rise over the horizon a handful of times. After Superstorm Sandy, in 2012, I snuck past the National Guard onto the island to take photos of the destruction. As the sun rose, I watched light dance across the sea and sand, transforming the landscape of loss into a majestic, sacred scene. A warm golden glow held the ruined homes in a halo of hope that was surrounded by an expanse of serene blues and purples.

That was five years ago. Some homes have been rebuilt. Others have not. Rows of pine trees that hid oceanfront mansions and offered residents privacy were torn from the sandy soil by the unprecedented force of wind and waves, making oceanfront wealth, and disparity, naked. The halo of hope has morphed the place into an altered, but recognizable reality.

Like an unreachable distance, 2018 was a horizon line that I’ve kept vaguely in my line of sight for the past decade. This was the year when any lingering clouds of grief from my son’s 2008 death would have been blown out to sea by winds of faith, hope, love, and pure grit. The sun would have risen above the wreckage, transforming the marred landscape of my life into a postcard worthy scene brimming with new life.

I held this focal point in my mind’s eye because a friend had mentioned it as a turning point in her own journey. Her family had been in a horrific car accident when she was young. Only one member had escaped without serious injury. She said it had taken ten years for the family to fully recover from its trauma.

But somehow the dark clouds have never entirely lifted to reveal the sparkling grey-green beauty that dazzles. Instead, it seems, the very climate of my family’s existence was transformed into one where beauty, once clear and sparkling like sun on waves, is perpetually obscured. It’s there, but it has to be searched out and dug up like the rare blue sea glass that only appears on shore after an especially violent storm.

I had lain in bed that morning silently confessing: God, if I’m being honest, I don’t think you love my boys. It was an audacious statement born of the fact that we had raised our two sons in a loving, faith-filled home and both of them were noticeably struggling. My prayer was a desperate mother’s plea of God, where are you?

Being the mature Christian woman that I was, I shook off my lack of faith and went for a long walk to get my head together. I worked to reconcile what I knew from a quarter century of faith practice and Bible study with my doubts, fears, and daily experience. Silently I surrendered: God, I know you love my boys. Please help them. Please deliver them.

It sounds laughable to me now, even as I keep praying a version of this same prayer for my now thirty-year-old son who lives in poverty because of mental illness. It’s not that I didn’t expect to suffer in this life or think that my child couldn’t die. No. I felt betrayed by God because of his response to my confession: God, if I am being honest, I don’t think you love my boys.

Instead of rescue, he allowed my bright, beautiful boy to do ultimate violence to himself and to everyone who loved him. And, he has continued to allow my other son to suffer in ways that I can’t even begin to fix. What kind of God does that?

I’ve asked many a pastor and theologian to answer for God over the past decade and none has even seriously tried. Whenever I’ve sheepishly interrupted a friendly faith discussion with my real-life scenario, I’ve been met with fumbling or silence.

Early on, however, a feisty church grandmother offered the only answer that has ever made any sense to me. “You don’t know how many times God did intervene to save your son before he didn’t,” she said. That’s a meeting of sovereignty and free will that I can accept.

The truth is I don’t know how many times God has intervened in the seemingly endless storms that continue to batter me. Every time I cross the bridge to the barrier island and experience the altered landscape, I am reminded that restoration isn’t like the sun rising over a distant vista. It’s the changing landscape on shore.

The anniversary that for so long looked like a motionless silhouette on the horizon is now imminent. I still long to see a sunrise as rare and beautiful as the one that revealed so much majesty and hope after Sandy.

Maybe, like my sister, I need to develop a regular practice of rising early and starting my days at the beach. If I devote myself to looking for the scene, it’s sure to appear, right?

In the meantime, I’m not only praying desperate prayers for my son, I’m praying them for myself. God, are you there? OK, I still believe you are. I trust that you love me. Please help me. Please deliver me.

Christine Di Pasquale Scheller is a multimedia storyteller working on an MFA in Visual Narrative at the School of Visual Arts in New York City. She works in science communications in Washington, D.C., but will always call the Jersey Shore home.