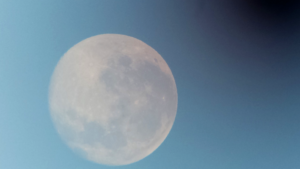 The 1960s were the years of the Gemini and Apollo missions. I doubt I missed the television coverage of a single launch, spacewalk, or splashdown. For someone who did not live through that era, it is difficult to convey the aura of excitement and adventure that these missions conjured. They were scientific enterprises, to be sure, but for me they were also adventure stories: the risks and rewards of a journey toward mystery.

At the same time, darker things were taking place alongside the space race, including the Vietnam War and the violence and hatred that followed in the wake of the Civil Rights movement. A similar darkening was just beginning in our household, as my parents’ marriage began to experience the first stresses and strains that would eventually break it apart.

The stars became for me a place of escape—or perhaps, from a more compassionate perspective, a refuge, an imaginative space in which to test various ways of seeing the world. As the Apollo missions ended, I found that the best way to remain amongst the stars was through science fiction, including some of the classics: Asimov, Clarke, Herbert, Le Guin. Like any kid, I reveled in the exoticism of these imagined worlds. But the more deeply I read in the genre, the more I began to intuit that for all its wild inventiveness, the best sci-fi could not—and should not—attempt to reinvent human nature.

That became the source of my eventual disaffection with Star Trek. The original television series premiered in 1966, when I was only seven, so I must have watched it in reruns. Looking back on it now, it’s easy to see that Star Trek was an incongruous mixture of progressive ideas about inclusiveness with old-fashioned swashbuckling. What I think really appealed to me about the series wasn’t the topical themes of certain episodes, so much as the ongoing story of the friendship between Kirk, Spock, and McCoy.

Years later, at eighteen, on a steamy early summer day in New York, after my parents’ marriage had ended and I needed to find a new way to live in the world, I sat transfixed by Star Wars. After the credits rolled I remained in my seat and saw it a second time. That was the beginning of my conversion.

What had always nagged at me about Star Trek—and any science fiction really, including dozens of the novels I’d read by that point—was the temptation to use the freedom of the genre to create characters who were magically released from the bounds of human nature and to treat technology as a substitute religion. For all Star Trek’s high-minded speeches about What Makes Us Human, the notion that earth’s civilization had evolved beyond petty national and cultural conflicts ultimately rang false.

I’ll grant that Star Wars has as much swashbuckling and silliness as any science fiction universe—the vague, Manichean theology of the Force being an obvious example—but it had two things that Star Trek lacked: politics and religion. The medievalism of Star Wars—its world of knights and lightsabers—seemed to reach deeper into our collective cultural memory than the technologism of Star Trek.

A corrupt, riven republic; a monastic order of do-gooders who are in danger of allowing their privilege to blind them to their own weaknesses; the human heart caught between light and dark: these tensions and ambiguities mirrored my world in ways that were more challenging and truthful. In Star Trek, everything could return to normal; in Star Wars, redemption might be found, but its cost would remain.

A few weeks ago I saw the latest film in the series, The Last Jedi, and felt that the franchise, after drifting from its early promise, had regained some of its original vision. Its gifted director, Rian Johnson, has made a film with a subtle but persistent theme: the difficulty of letting go. One of its young protagonists believes that the only way to avoid being entangled by the sins of the previous generation is to simply sever one’s relationship to the past—by violence.

The other young hero is desperate to regain a lost tradition, only to find that the last remaining link to that world has rejected it because it has failed to live up to its ideals. This is symbolized in the moment when the young Jedi aspirant, Rey, returns the grizzled Luke Skywalker’s lightsaber to him. The audience, of course, is prepared to see this exchange as a ritual act suffused with sacred awe. Luke takes the lightsaber from her and nonchalantly tosses it over his shoulder and the cliff edge behind him.

In that instant, Luke acts more wisely than he realizes. He, too, has turned against the past in cynicism and despair. It takes a deeper, more radical act of renunciation later in the film to show him that to hold on to the essence of what is good is to live in the memory of what engendered that good, rather than in the trappings that get built up around it—that his weight, his gravity, lies in the love that moves him rather than in his success or failure. He is then freed to offer his own sacrifice in a way that echoes that of his master, Obi-Wan, and thus reestablish the meaning of what it is to be a Jedi.

This is a hard truth to accept—and a harder one to practice—but my sojourns out amongst the stars have at least contributed to my slow apprehension of that truth. We last see Luke as we saw him at the beginning of the series, gazing out at twin suns. Now as I look for the stars, I have the Pacific Northwest’s clouds to contend with, not the city’s bright lights, but I look for them still.

This post appears as the editorial statement in issue 95 of Image. Read Part 1 here.