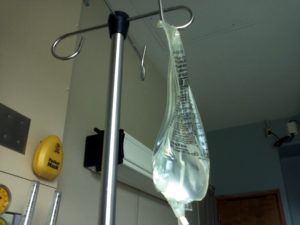 At first I didn’t know that I was dying. I’d been rushed to the hospital emergency department because I couldn’t breathe, put on oxygen and wheeled right to Intensive Care.

The week or so in ICU is a blur now. But ICU must have been where it was discovered that my kidneys were failing—because I do remember the huge dialysis machine rattling away in my room for hours at a time.

Dialysis continued after I was moved from ICU to the special unit for pulmonary issues. So I was aware of two organs hanging by a thread: lungs and kidneys.

The lungs had lots of liquid around them. After the doctors tried draining the fluid with a needle (and pierced a lung in the process), they decided on surgery.

Meanwhile, before and after the lung surgery, the dialysis continued. Its goal was to get the kidneys up and running by themselves, but they weren’t responding. As the kidneys continued to fail, I was told that staying alive would mean lifelong frequent dialysis. I thought it over—but didn’t need to for long. No, this would not be an option for me. Dialysis was the most uncomfortable procedure in my long experience of medical procedures. And on an outpatient basis, it would take a minimum of six hours each day: not much of a quality of life.

So I lay dying, it seemed.

Then after about a week more, the kidneys started returning from their vacation. Why? What drew them back? The medical procedures hadn’t changed, so I attribute it to the prayers of others. As I later gradually learned, more friends than I can count had been praying for me. It’s to them that I attribute my body’s turnaround.

So as I lay no longer dying but starting to recover, I had time to learn what had caused the initial bodily breakdowns. Here’s the backstory:

Once upon a time (about fifteen years ago), I was diagnosed with a chronic form of leukemia. Its characteristic is a growing number of non-matured white cells, which keep good mature white cells from developing. The result is a compromised immune system. Over the past year, the nasty white cells had reached 200,000, letting all kinds of infections invade the body. So my hematologist and I decided it was time to try a round of chemo. He chose a chemo with a good track record: minimal side effects; infusions just twice a month.

I had my first pair of infusions in early November. Nary a problem. Until, three days later, I began having trouble breathing, culminating in the rush to the hospital that I mentioned at the start.

When my hematologist came around to ICU to tell me, chagrined, what had happened, he said that he’d never seen it happen before. In lay terms, the chemo had worked too well too fast: it had zapped all the bad white cells but also zapped all sorts of the body’s good cells. The technical term was tumor lysis syndrome—which can, yes, cause kidney failure… and death.

Once my kidneys started functioning, the drama among the nurses was how much urine the kidneys would begin to produce on their own. Every drop had to be measured. Gradually…very gradually…we got up to 100%. So then I was free to go home, after nearly three weeks in the hospital.

But what about the lungs? Even after the surgery, I had to be on oxygen constantly. So I was sent home with a large floor canister which pumps out oxygen non-stop and with cannulas to bring the oxygen into my nose. This works fine at home. But when I have to go out, mainly to doctor’s appointments, the oxygen is a major hassle. I have to switch to a portable tank—too heavy for me to carry, so my husband has to shoulder it and stay close by my side.

I was also sent home with a walker. My muscles had atrophied after those nearly three weeks lying in a hospital bed, and I couldn’t support myself standing. The walker became my constant companion, as first I’d toddle to the bathroom, then take slow walks around the living room, then work up to a speedy near-run, barely leaning on it. Finally I could walk easily on my own; the walker is now stashed in a closet.

The other handy item I was sent home with was a hospital bed. I liked how the head and the foot could be adjusted for comfort. For weeks, as I lay there at bedtime not dying but recovering, I’d pray in gratitude for whatever little steps of progress the day had brought.

Then I’d muse: I’m no longer dying, so God must still want me around. Is there something specific that God wants me to do? Or be?

I still don’t know the full answer to these questions. But I’m well enough now to resume volunteering with my parish’s Adult Education Committee, to knit a shawl for a bridesmaid in my niece’s upcoming wedding, to help my husband fix dinner, and to write this post. So maybe those are some things that God is keeping me around for.