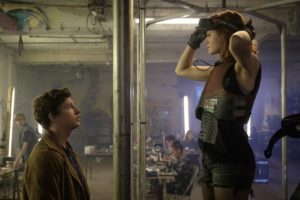 The best way to write about the third installment of God’s Not Dead is to write first about Steven Spielberg’s Ready Player One. Their unexpected but undeniable tie is the desire to see yourself onscreen and what that representation reveals.

In Ready Player One, people spend their time in the virtual reality called the OASIS (Ontologically Anthropocentric Sensory Immersive Simulation). This story takes place in 2045 when the modern world has devolved into destruction. To escape the ugly state of things, people live in the OASIS where you can be whoever you imagine yourself to be with seemingly fewer constraints.

The love interests in Ready Player One, Wade Watts and Samantha Cook, first know each other’s avatars, Parzival and Art3mis. Parzival falls in love with the beautiful and resourceful Art3mis, and he desires to meet her in person—in “real life.” She is not so sure.

In moments like this, Spielberg warns of the dangers of lingering too long in virtual reality.

While Ready Player One is far more entertaining and artful than God’s Not Dead: A Light in Darkness, each film shares a functional devotion to its imagined world and that world’s fandom.

I grew up attending an evangelical church, I was educated at an evangelical school, and I’ve worked for evangelical employers. I am forever tied to a Christian community associated, often fairly, with several attributes that I find unchristian.

I’m tempted to voice this on Twitter, where I am Nick Olson, yes, but more precisely @nicholas_olson—a version of myself.

None of us can fully dissociate ourselves from our biographies or from the traditions and communities within which we’ve been involved. Instead we must ask, given how this identity has indelibly formed me, who will I become?

During Holy Week I checked the Twitter OASIS. I saw my post-evangelical friends distancing themselves from the Right Wing Christendom Apocalypse. I saw how evangelical they were about it. I saw an advertisement for the new God’s Not Dead. I made a dumb joke about how the real God’s Not Dead is actually Lady Bird. I checked in periodically for the likes and retweets.

In the Twitter OASIS, it’s easy to project a perfectly curated identity that is free from any associated guilt. We are free to craft an identity, leaving only the parts we like, or, the parts we know people will like. Call it a virtual self.

Here’s the good news about God’s Not Dead: A Light in Darkness: It’s trying to tone down the victimization and triumphalism. There are moments given to self-criticism of Christians, given to understanding of non-Christians, and given to a general exhortation to love those with whom we disagree.

Yet, these moments seem unbelievable when the premise and plot pander so readily to the particular evangelical social imaginary defined by persecution, as if conservative evangelical Christians imagine themselves in a Christian-parallel Spielberg movie where they float on rafts at sea, while atheistic secularists might surface and attack at any moment.

The film’s premise: A college student struggling with her faith dates a guy who used to have faith but no longer does. The guy doesn’t like the church because his dad used to beat his mom and when she left him, the church labeled her a sinner in humiliating ways. This (believable) backstory is revealed late in the movie and is not explored.

Instead, the unbelievable plot begins when the guy fears that his girlfriend is leaving him, and in a moment of drunken anger, throws a brick through the church’s window. The brick lands perfectly so that it trips a gas canister, causing a fire when the black associate pastor walks in to turn off the alarm triggered by the brick.

The black co-pastor dies. The white pastor lives, but while mourning his friend’s death, he becomes engulfed in a campus controversy when the board decides they want to rid the college of the church altogether. The grieving pastor realizes it’s time to reconnect with his estranged brother, who was a Christian but no longer believes. He’s redeemable, though, because he’s a lawyer willing to battle other atheists.

It’s as though we don’t know how to imagine God’s presence onscreen except through mind boggling plot gymnastics. God may not be dead, but you can’t help but wonder here, since he’s surely contrived.

These movies are made by Christians who don’t see themselves depicted well by Hollywood, but ironically I fail to recognize onscreen any evangelicals I know. We’re both far worse and far better. Some no doubt have bought into the fantasy logic of this film’s world (call it the Fox News OASIS). In the main, though, this virtual representation of the life of faith fails to suspend disbelief.

Another irony is that people outside the OASIS can detect the disjunction between reality and near-reality, and when the disjunction is unintended and glaring, few things are less lively and less inspiring.

A better alternative may be to search out compelling works of art from believers and unbelievers alike who evince a faithful perception of the world. Those visions have saved my soul through the years.

When that happens, why not escape reality?