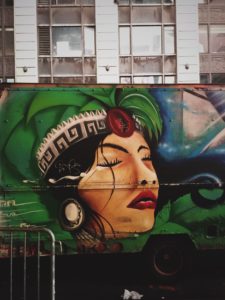 I spent elementary school in a Mexican neighborhood in Austin, Texas. I attended birthday parties with piñatas and ate in a school cafeteria that served home-style enchiladas, tamales, and beans made with lard. And because of my dark hair I truly didn’t realize a difference between the other students and me until fourth grade, when my Latino classmates nicknamed me the Holy Ghost on account of my fair complexion.

I came home in tears, alarming my parents. But when they asked the reason they couldn’t help but laugh at my classmates’ creativity. These were my friends, they said, and the Holy Ghost was always with me. I considered these truths and cheered up.

My classmates and I were still the same.

Fifteen years later I got a job in Dallas, teaching eighth grade Spanish to Latino kids who spoke Spanish better than I did, but who couldn’t write in their first language. The goal was for these children to complete a formal essay and give a speech at the university level. If they succeeded they would receive both high school and college credit.

I couldn’t always understand my students’ banter, but I pretended and continued with false confidence into the realm of thesis statements and college acceptance, encouraging my students to believe that they could find success on the other side of an AP exam.

“But what if you don’t have papers?” a boy named Cesar asked one day.

“Which papers?” I asked, stupidly—my mind on essays and homework.

The entire class looked to me, their teacher, who was teaching them to succeed.

“You can still go to college,” I answered. “Texas offers instate tuition to residents, legal or otherwise.”

“But you can’t get a job,” Cesar answered.

I took a breath. He was right. Several kids looked down at their desks. I wondered how many of my students were trying to make good grades and go to college so that they could be unemployed.

I didn’t know what to say so I said, “Maybe you can, at some point.”

Cesar disappeared a few weeks later. He never withdrew from school. I could say that I don’t know what happened to him.

Turns out, the color of our skin wasn’t our only difference.

During that same time, my husband completed a surgical residency at Parkland Hospital in Dallas County. There, regardless of legal status, county residents receive medical care for free or they’re offered “pay what you can” insurance so that they can attend area clinics and receive preventative care.

But undocumented workers are afraid to sign up because they fear deportation.

I myself gave birth to our daughter at Parkland—she was the only Anglo baby on the floor, despite the fact that they deliver the second highest number of babies worldwide.

When my parents arrived, the nursing staff pointed to my room before they even exited the elevator.

“How do you know who we’re looking for?” my dad asked, jokingly.

“You know how I know,” a stodgy nurse answered.

Later, an orderly wheeled me past the nurses’ station, and we passed another new mother, clutching her stomach and pleading with the nurses.

“Please tell them,” she asked in Spanish, holding her hand out to me, “I need to go home.”

“You need to heal, it’s just a couple more days,” I answered.

She was afraid immigration would deport her from the hospital.

In a border state, our taxes pay for all students to be educated, for women to obtain hospital care, for children brought here illegally to receive vaccines. The residents of Dallas County foot the bill when a worker falls from a roof, or when the public school system needs capital improvements for their ever-increasing student population.

Our own property taxes went up so drastically one year that my husband and I could barely make our mortgage payment.

But when he operated at the hospital, and I taught in my classroom, we realized that our ambitious belief in hard work proved true only some of the time. Our blissful American ignorance was torn away in our own backyard.

There were big differences between our lives and those from south of the Rio Grande.

Now we live far from the border, and I find myself approaching complete strangers when I hear them speak Spanish. I am so homesick. Yet, I find myself patching my ignorance with distance and comfort.

Injustice exists here, but it doesn’t stare me down and ask me questions like in my border state.

But as Congress discusses immigration reform, I can’t help but wring my hands and swallow the rising lump of hope back down into my throat. Because I still don’t feel that different than I did in fourth grade—and I sometimes dream about Cesar and that woman in the hospital.

I don’t have the answers for my border state. But ignorance is an inexcusable luxury when we live amidst the truth. Still, that same truth must be sought.

Somehow, truth is both granted and earned; grace not works—but still, work must follow.

In her song, Up to the Mountain, a tribute to Martin Luther King Junior, Patty Griffin pinpoints the nebulous answer—the work of calling. The work of seeking truth paired with the grace of receiving it.

It’s work, climbing the mountain of ignorance into sight. But we are asked to live on the border and to gaze unabashedly at the faces we see there.

Only then, by grace, will we cross together.

This post originally appeared at Good Letters on February 24, 2013.

Jessica Eddings-Roeser is a writer and mother who currently resides in Charlottesville, Virginia with her husband and children. While she has a background in education, she is presently home and writing while her family sleeps. Jessica has an MFA from Seattle Pacific University, and has work in Rock and Sling, Magical Teaching, and Art House America.