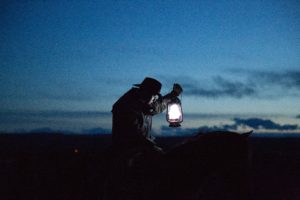 Here is a poem about making a poem. The first stanza, a single sentence, stretches out through cosmic imagery: “light sift[ing] down,” “erasable darkness seep[ing] up,” “the crack to the radiant world closing in on itself.” The diction here is high, poetic. Then suddenly the next stanza plunks us down to earth with “One way of putting it.” What follows is in a sense another poem describing the same event in more mundane language: what’s happening is simply “twilight.” But even this mundane diction shifts in the final sentence’s elusive metaphor: “Dream of the golden fire piece.” Though I might be wrong, I take this as the sun in its setting. Meanwhile, as the poem moves through its levels of diction (the title reaching the lowest level, with its intentionally faulty grammar), at the same time it plays back and forth with images of motion and of stillness. In the first stanza, “everything suddenly stopped”; in the poem’s final line, the dream “Is ever-restless, ever-turning.” I finish this poem feeling a bit off balance: are we still or moving? are our feet on the ground or floating through cosmic heights?

“Pray That the Creek Don’t Dry Up,” by Charles Wright

It’s funny how light sifts down, out of itself,

How thin, erasable darkness seeps up and expands,

No wind, no movement, no words,

The wheel stilled, the crack to the radiant world closing in on itself.

One way of putting it.

Last clouds chasing each other across the western mountains.

Along the scarred creek bank, nothing stirs.

Dream of the golden fire piece, however,