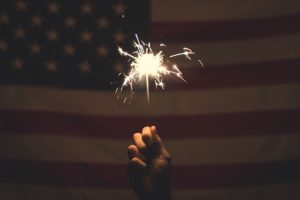 The day is hot and musty but everyone is celebrating. After all, everyone can enjoy a small town fireworks display, right?

I used to think so. But in revelatory moments, the sheen of this small town—with its beautiful park and festivities—is pulled back to reveal what was always present. Life isn’t always so bright for those who have been pushed to its edges.

My small Midwestern town wakes at dawn’s early light, gathering and preparing for Independence Day at the town park, named for a wealthy deceased resident. His entire family is remembered in the cemetery across the street from his park, their white lawn-level memorials the length of coffins, circling Greek columns like a sort of Midwestern Roman temple.

This native son and his park are the town’s pride and joy. Turtles sun on rocky patches by the pond and a family of geese grow and thrive from early spring to summer. The park boasts a trail of a million lights at Christmas, a public pool with a waterslide in summer, football and baseball stands, walking trails, and now, fireworks and festivities for Independence Day.

My husband and I walk the three blocks from our house on the hill, pushing our dozing one year old in the stroller. People who’ve been at the park for hours stare at us, probably drained by the heat and anticipating the finale of the day. Some of them look weary in ways that have nothing to do with the heat.

When my husband tells a funny story during his sermon a few weeks ago about a time he was almost arrested for something he didn’t do, a woman in her nineties—who still dresses in plain Mennonite clothes—calls out so that those in the pews beside can hear: “If he’d been black, he’d be in jail.”

I feel safe in this small beautiful town that I’m coming to love. But I am aware that people of color might feel threatened by so many stares, where Confederate flags fly freely in the surrounding areas, and it’s unclear what reception they will get if pulled over by police.

Some of our plainly dressed conservative Mennonite brothers and sisters toss a ball to their kids, saving their spots on the grass for the fireworks show. Some Mennonite communities, with their pacifist leanings, tend to avoid pointed festivities on the Fourth of July. But I’ve found that even Mennonites who have qualms about glorifying battles and pledging allegiance to anything but God, can put aside their misgivings when it comes to the magic and wonder of artificial bombs bursting in air.

And I guess Mennonites aren’t the only ones to lay aside their differences for the holiday. Newscasters claim we are all, as a country, putting aside our political differences for Independence Day. Shaking hands over a glass of a rocket’s red glare. Gasping together in delight at exploding lights.

But not everyone is gasping in delight. Our friends who live in community with refugees tell us that refugees can be traumatized by fireworks displays. When their homes and cities and parks have been razed to the ground by rockets and bombs, who can blame them?

As we stare up in the sky, delighting in the pre-fireworks show where skydivers float down to the football field with American flags streaming out behind them, families and children sit in the confines of detention centers. After the largest immigration raid in recent history took place the next town over from us, leaving children to be cared for by friends, relatives, or the local church.

There are so many things we try not to see in such an idyllic town. The man stumbling down the street as I walk my kids to the library is clearly hopped up on something but he still manages to say hi to me as we pass. The questionnaire I get at the pediatrician’s office, asking me if I experience abuse in my home.

Our native son is famous in this picturesque town. But what of the true Natives, the tribes whose land we inhabit? The Potawatomi and the Ottawa lived here for generations, when it was truly the land of the free.

Sometimes we need the old wise women in the pews next to us to shout it all out so we don’t forget.

My husband and I are sweating by the time we reach home again, eager to get our son in bed before the fireworks begin. As darkness descends, our neighbors settle into rocking in chairs on their porches, young families with children, older couples holding hands, teenagers on first or last dates walk past our house to reach the park.

Miley Cyrus sings from a neighbor’s radio about how fun life turns out to be once she arrives in LA, far from home. “You know I’m gonna be okay” she fairly screams, because “yeah, it’s a party in the USA.”

Fireflies, stimulated by the heat of summer, whet our appetite for the coming light show. We move our lawn chairs to the street so we can see past the tree blocking our view.

A police car rolls slowly by us as we sit in the road and the officer hardly glances at us through his window as wait for the fireworks.