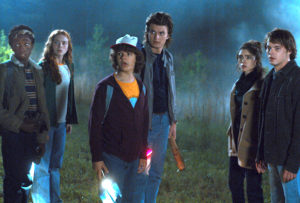 In July 2016, I watched season one of Stranger Things with my younger brother. I didn’t encounter a Demogorgon in the small town where we grew up, but I did use walkie-talkies, grow infatuated with girls from school, and roam the neighborhood on my bike.

Last fall, I watched season two with my wife, the older girl in high school who I had crush on. Long before we were married, I even found the confidence to ask her, a junior, to my freshman prom.

My mind was first drawn to the context of watching Stranger Things before the show itself. This is instructive for how the show has become a pop cultural phenomenon: Its attention to the past isn’t reducible to its 1980s setting. I was born in 1985, but I am a child of the 90s. I miss more of the show’s references than I recognize, yet its nostalgic spell affects me.

If nostalgia is the ache of homesickness, then the longing that animates Stranger Things isn’t reducible to the desire for Phil Collins and mullets and Dungeons and Dragons. The show’s sense of nostalgia is deeper and wider—perhaps the powerful subtext that some critics have been looking for.

Stranger Things recognizes the profound ways that we are estranged from home, enfolding the resultant nostalgia into the show’s every layer.

Nostalgia compounds “homecoming” and “pain.” I’m intrigued by how the show’s nostalgic sensibility is situated in horror and science fiction. The scares are fundamentally about homesickness, and science fiction, even when set in the past, orients us to the future—to where our scientific discovery and technological application can lead us.

Stranger Things combines these—nostalgia, horror, and science fiction—into a potent brew for us to binge until we are familiar again with what ails us.

For the uninitiated, Stranger Things follows four middle school friends and their siblings and families in Hawkins, Indiana, where they have discovered an alternate dimension, the Upside Down. From this dimension a monstrous force is able to cross over into Hawkins to hunt, capture, and kill townspeople.

Meanwhile, the CIA and a group of scientists are aware of the alternate dimension, have conducted experiments with it, and strive to keep it secret. Included in this conspiracy are secret past experiments performed on a number of abducted newborns that gave them special powers.

In the first season, one of those kids—Eleven, who has telekinesis—befriends three ordinary boys as they fight to recover their missing friend, Will, who’s held captive in the Upside Down.

In season two, homesickness only intensifies as the characters deal with trauma. Hawkins, Indiana suffers a kind of monstrous infection that sickens the town’s very landscape, beginning with fields of crops. Additionally, the most horrifying human character—new addition, Billy—inflicts much bitterness on others, in part, because he has an abusive father.

Nearly every character has some kind of problem at home. Even the most intact family dynamic features Mike Wheeler watching television and indulging the sort of passivity that doesn’t answer the door. In this respect, our time with Sean Astin is especially short lived.

While watching the show may fill us with longing for our childhood, these kids long for something else, too.

Steven Spielberg is an important nostalgic reference. The Duffer brothers have discussed conceiving the Demogorgons as a spin on Jaws where suspense is drawn from the possibility that the monster can attack suddenly from beneath the surface.

Equally Jaws-like, though, are the intimate, familial moments between family members or just friends. Maybe not enough of these moments achieve the subtlety of the father/son dinner table scene in Jaws, but the show undoubtedly attends to them.

While I’m emphasizing a nostalgia that transcends mere references to a particular cultural past, those references remain important. This pop-nostalgia is based on familiarity, which is one way of talking about home.

It’s more complex than simply hoping most viewers are familiar enough with the references. Rather, our nostalgia for the past is always bound up with a kind of strangeness because the present maintains discontinuity with the past. On some level, the past has been lost, even while our history remains with us.

That season two is a sequel only adds to the show’s appeal. Stranger Things has become a reference to a past version of itself. Nostalgia plays on our longing to preserve the good. Thus, #teamBarb will live on, if only in our hashtag campaigns and season one re-watch parties.

In the second season so much depends on the battle for Will Byers’s mind. The science of the show’s nostalgia finds fertile ground in the biological idea of a host. Ever the victim, poor Will suffers from housing the Mind Flayer. In episode 8, Dustin explains that the Mind Flayer is so messed up because “it doesn’t even know its true home.”

Get lost enough in our techno-dystopian age and you’re in danger of becoming a super villain afflicted with the homeless mind. Will begins forgetting his loved ones and thus the memories they share together.

This sense of homelessness is the source of Eleven’s conflict, and the season’s biggest misstep. Episode 7 was a bold failure worth attempting, even if it was ill timed and poorly acted. Eleven had to leave to discover that home may not be finally reducible to the traumatic origins of the immediate family that she lost when she was abducted. Home could be what she had with Dustin, Mike, Will, and Lucas.

Nostalgia afflicts people in exile; to remain hopelessly devoted to some ideal past is mistaken. However, nostalgia’s underlying intuition makes a way forward for our homecoming. This path is where the best of what has been heard and seen and lost is remembered and hoped for as an undiminished end.

We see one last shot of the looming Mind Flayer, but, strange as it sounds, there may come a time when we won’t need another sequel or remake to preserve us.

This post originally appeared at Good Letters on November 7, 2017 with the title “Nostalgia for Stranger Things.”