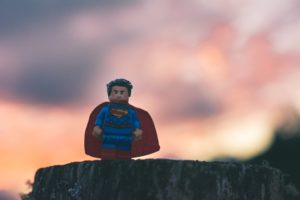 In the video James Corden approaches a podium wearing a dark grey suit and a light grey wig to address a room full of reporters, but instead of making prepared remarks, he launches into song. He’s announcing his indictment of the President, and he and his audience are thrilled.

“Robert Mueller’s Indictment Song” is the moment in The Collusion Follies—the dark-comic, absurdist goat-song we’ve been writing in our minds for two years now—when the hero finally brings the hammer down on the villain. Big Orange caught red-handed. The pussy-grabber nabbed.

The unlikely hero is the public ghost Robert Mueller, figured by Corden as a Baptist minister leading his flock in an ecstatic gospel number revelling in the restoration of sanity. It’s a skit that says so much about the Left without saying a thing about Mueller.

The special counsel has kept admirably quiet during his investigation, as if he’s been trying to tell us, “It’s not about me; it’s about the facts,” but progressives love a hero as much as conservatives, and with John McCain’s passing and the lack of vision among congressional Democrats, Mueller is the best hero they can find.

Humans love heroes. They excite. They inspire. We’ve even tried to reconcile our hero-worship with the decidedly unheroic life and death of Christ. An Anglo-Saxon poem does this by having Jesus climb up onto the cross:

The young warrior stripped himself then—that was God Almighty—
strong and firm of purpose—he climbed up onto the high gallows,
magnificent in the sight of many….

I’ve written here about my fascination with heroes like Wonder Woman and Batman (so I guess I’m human). As Corden’s skit demonstrates, heroes are spiritual. They focus the values and dreams of a community, our sense of self. But as Christ’s story demonstrates, they can also become our scapegoats. They can focus our anger, hurt, and disappointment.

If Mueller does not indict the President, how many progressives will turn on him? How many will argue he failed at his job, meaning that his job was to oust a petty dictator.

The righteous assurance of the Right and Left has long kept me from embracing either side. I’ve had enough heroes fall. I’ve seen enough ends-justify-the-means thinking from people who claim to value character.

That’s one reason I enjoy comic books more than politics. Superman can save the day because he has all the powers; Barack Obama had executive orders and the veto. (For a look at Superman’s limitations, try Superman: For Tomorrow.)

Fictional-only hero-worship prevents me from being too disappointed—and maybe from forms of joy—but I hope it helps me see some things more clearly. It seems like the disciples had to be broken of hero-worship, too, after all, in order to become the Apostles.

When the disciples saw their hero being led to his death, they cowered in fear. But then their hero returned and said it isn’t about heroes, it’s about fishermen and tentmakers, sinners and tax collectors, widows, orphans, and immigrants.

More mysteriously still, it’s about “principalities” and “powers”, spiritual forces invisible except by their effects. Saruman is a problem, yes, but he’s only an instrument of Sauron.

The LEGO Batman Movie may be an imperfect gospel, but it might have more to tell us than 24 ever did. The film takes the American hero motif to its logical conclusion: the total emotional and physical isolation of the hero from human community (As Alfred says, “Master Bruce, you live on an island, figuratively and literally.”) and then shows us a way out.

These powers and authorities from the Shadow Realm literally split Gotham City in half. But the gospel of the film is that we don’t need just one person to fix everything—we need all of us.

Over the course of the movie, Batman acquires allies he needs but doesn’t want. First Alfred, then Robin and then Barbara Gordon (“If you call me ‘Batgirl’ can I call you ‘Batboy?’”) join in, but Batman struggles throughout to let them truly help. It eventually becomes apparent that he simply cannot save the city on his own, however great his abs are, and he at last marshals the strength of the whole community to help it rebuild itself—villains included.

If we let it, this “kids’ movie” offers a challenging revelation of our own tendencies to see ourselves as hero and the other as villain when we have more in common in the struggle against death than we will admit.

A real Joker would of course need to be stopped; the comics Joker is a metaphor for the unpredictable, motiveless hand of fate that in a real sense can never die.

That’s why in comics narratives like LEGO Batman, killing the bad guy only offers temporary satisfaction—it can even be disappointing. The presence of the personified evil forces the hero to become better every day in order to constantly confront and repel it—just as we must learn every day how to confront the forces of violence and chaos in our own lives.

I can’t keep up with each day’s revelations of who harrassed whom and what embarrassing thing our elected leaders did. It’s too depressing, and I haven’t had a fruitful political discussion with the Jokers and Banes in my life for a dozen years or more.

What I keep trying to believe, though, is that our oppositions are never more than a game of negotiating life together, are never really insurmountable differences. Nothing human can be foreign to me, right?

Beneath those gruesome smiles or kitschy cat and penguin costumes are real human beings, if I only take the time to remember. And I need them if there’s any hope of holding Gotham together against the real bad guys.

Batman can’t do it alone. He was never supposed to.