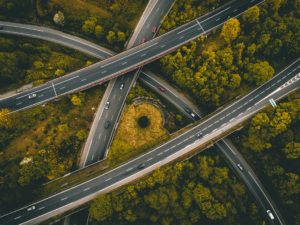 When I was in my twenties, toward the end of a not-especially-dissolute but nonetheless untethered youth, there was a period of a few months when I spent a lot of time with a man who had been the big local rock DJ when I was in high school.

He had moved into my threadbare downtown apartment building—an unrestored Art Deco gem swallowed around by concrete, in a midsize Deep South city during the height of the 1990s crack epidemic.

Most of the apartments were occupied by ninety-year-old widows on small fixed incomes, along with other misfit-types who’d found themselves at some kind of odd crossroads: a middle-aged woman “trying out” leaving her husband; a law student who blared music until the wee hours and seemed to have some kind of borderline personality disorder (I steered clear of him).

Our cars were regularly stolen and nobody went outside at night.

The DJ moved into the building because he was going through a divorce.

“You’re not….?” I said when I met him, and then collapsed into recollections of songs he’d played and skits he’d done on-air on his “morning zoo” show. And being a showman, he was flattered by my praise and we ended up becoming fast friends.

“Fast friends” is a cliché, but in this case it was accurate, for the few months that we hung out, we spent hours upon hours of time together.

Virtually all of it was platonic—he had complicated matters going on involving his divorce that I didn’t know about—and we were really what my ex-brother-in-law Tommy, may he rest in peace, used to call “running buddies.”

The DJ was a recovering alcoholic, so when the Warner Brothers A+R man came to town, he invited me along to dinner at the most expensive place in town, and ordered a bottle of Dom Perignon I had all to myself.

We rode around in his red sports car on the weekends, and he let me make calls on his brick-sized cellular phone: “Hey, bet you can’t guess where I am!” I exclaimed.

One night when we were driving around, he said he had to run by and say hello to an old DJ friend. It would just take a minute.

He pulled off the broad boulevard that connected the city’s rich white suburbs to its black-majority core, past the Shipley Donuts, and deep into a dimly lit neighborhood of 1970’s ranch houses.

He parked out front of one small, low-slung house, and got out of the car. I wasn’t exactly forbidden from getting out, but for some reason I remained inside.

After a minute, the old DJ friend came outside the front door, and for a good ten or fifteen minutes, the two stood in the yard, talking.

The old DJ friend was something of a legend in the local rock-music community, but free-form FM radio was long gone and I didn’t know what this guy was doing then.

The window shades were up in the house, and I could see through them—behind the yellow light—random movements of family life taking place. There were shadows of what looked to be a sullen teenage son moving down a hall, and if I recall correctly, through the windows there was the sound of a wife’s disapproving voice.

I got the sense the old DJ was somehow sneaking out without permission. My DJ got back in the car and apologized, saying his friend was a great guy, and he’d “just had to see him.”

We drove off into the night leaving a drawn figure standing against the dark with the hostile blaze of windows behind him. He was neither in the house in the thick of what appeared to be his family welzschmerz (melancholy and world weariness), nor was he the sexy rock DJ of long-playing records.

This sounds like I’m talking about a mid-life crisis, but what I’m really talking about is a concept I’ve come to call “middle time”—that time of waiting when nothing really seems to be happening and no transitions are taking place.

It was a quiet Saturday night and he was not doing anything, really, except for quietly talking with his old friend in the rock scene. It was middle time for me, too, sitting in the front seat with my hands folded placidly, lit with green from the dashboard light.

Only I couldn’t treasure it then: It was just a moment on the way to something else.

The flashy DJ had gotten to where he was in life by means of his own ability to inspire spectacle: to foster one’s sense of being on the precipice at all times, amid one’s own life drama. He had been a great entertainer and a great musician and he had had a few great addictions along the way.

Like Neal Gabler’s 1998 book Life the Movie, to be with the DJ for a night on the town was to live the narrative even as one wrote and proclaimed it.

And if anything, the flashy DJ’s approach to life has only gained in influence in the decades since that Saturday night when the Internet was only the tool of college campuses and bulletin-board hobbyists.

Now, most of visible reality seems to be arranged solely for the purpose of documenting it on social media. We leap from one minute to the next hoping to avoid all moments that are unframed, unassigned, un-photographed.

And thus to avoid the relentless undertow of middle time, drawing toward its insistent end.

I hold the old DJ friend in my mind often, that tableau of his thin figure against the dreary house in the boggy neighborhood not far from the river.

Sometimes I, too, now find myself outside in the front yard at night, separate from my family, though my own domestic life isn’t filled with welzschmerz. I stand still, motionless, this moment eternal, and try to breathe.