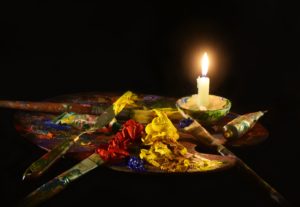 “Van Gogh did not sell a single painting during his lifetime, became increasingly unhinged, and shot himself at the age of thirty-seven.” So writes poet Jeanne Murray Walker in her engaging essay in the current issue of Image (#98), “Sandals on the Ground: My Pilgrimage with the Sonnet.”

Walker’s sentence about Van Gogh reminds me of the fate of British novelist Barbara Pym, whose books I recently re-read in the order she wrote them. Pym did not shoot herself. But after publishing six novels to great acclaim from 1950 to 1961, she unexpectedly found her seventh novel rejected — by her own publisher, Jonathan Cape, and by all others that she tried. The rejections dramatically changed the nature of the next two novels she wrote.

What still primarily interests Pym is her characters, especially how they essentially don’t develop. All her characters are everyday folks, living narrow lives. But in the first phase of her novels, the narrowness is tenderly comic. In the second phase, it’s tenderly tragic.

Her seventh novel, An Unsuitable Attachment, is tenderly comic — and just as good as her previous six. But, said the publishers in their rejection letters, the fiction market had changed.

This was the Sixties, and sex and raunchiness were in. William Burroughs’ Naked Lunch had been published in 1959. Henry Miller’s Tropic of Cancer, though written in the 1930s, was published in the U.S. in 1961. Both these books were for a time banned for obscenity, which of course helped sales.

What was Cape publishing in the 1960s? Catch-22, with its satire of war. On publication, it became an immediate best seller. Other anti-war and politically conscious novels, including those by Doris Lessing and Kurt Vonnegut, were also popular.

Using her novels for political commentary never interested Pym. As for sex, she did bring it blatantly into one of the novels she continued working on during those non-publishable years: The Sweet Dove Died. I can’t help thinking that this new element in her fiction resulted from a desire to write what people would read. Not that she got graphic with sex. But characters speak of “sleeping around” and “tearful scenes in bed.”

When in 1969 Pym had finished The Sweet Dove Died, she sent it around to publishers. To no avail. She wrote to a friend: “I fear Macmillan will not take The Sweet Dove, but only (they say) because it seems a risk commercially.”

What interests me here is how literary acceptance or rejection influences the art that is in fact created. The Sweet Dove Died is dark. The other novel that Pym wrote during these unpublished years, Quartet in Autumn, is even darker. They’re both superb little novels, but I doubt Pym would have written them if the previous light one, An Unsuitable Attachment, had been accepted by her publisher.

How much of the art that we have was influenced by whether or not the artist’s work found an appreciative public? Van Gogh’s extreme case is matched by that of American writer John Kennedy Toole. As a young man, he wrote the wild, wonderful, comic novel A Confederacy of Dunces. Failing to find a publisher for it, in 1969 he committed suicide in despair. So we have no more novels from him. (Eleven years later, his mother got the book published; it was an instant success, even awarded a posthumous Pulitzer Prize.)

Barbara Pym’s life had a happier ending. Suddenly in 1977 publishers accepted her works. The two dark novels she’d written during the long rejection years were grabbed up: by a new British publisher and now, to her delight, in the U.S. too. Rave reviews on both sides of the Atlantic made her an instant literary celebrity. Her original publisher reissued those six earlier novels. Pym was almost giddy with delight and fulfillment.

And during the two and a half years of life remaining to her during this “acceptable” period —she died from cancer at age 67 — she embarked on a new novel, which became A Few Green Leaves. You won’t be surprised to hear that this novel is not dark at all. It’s tenderly comic, like her early books.

Pym kept working on this novel, which she knew would be her last, during her cancer treatments. She finished it two and a half months before her death.  What intrigues me is that publishers’ now printing her novels — and even reprinting her early ones — trumped her knowledge of her impending death in affecting the tone of this final book.

I’m sure there are authors who are immune to publishers’ acceptance or rejection of their work. But I suspect they are rare. As Jeanne Murray Walker writes, “we can’t know about countless other artists who have never been heard from, perhaps because they could not recover from their lack of support.”

Peggy Rosenthal writes widely on poetry as a spiritual resource. Her books include Praying through Poetry: Hope for Violent Times (Franciscan Media), and The Poets’ Jesus (Oxford). See her Amazon Author Page for a full list. She also teaches an online course, “Poetry as a Spiritual Practice,” through Image’s Glen Online program.