The day before my uncle John’s funeral, I sleep most of the day after school drop off, the night before having been largely consumed by anxiety and grief, a mind untethered and roaming. I wake up to a voicemail from the vice principal of my son’s school, telling me that there has been an incident of some kind in the hallway. I want time to grieve, to just, in the words of a friend, listen to the dictates of the body for a while—eat when I’m hungry, sleep when I’m tired. But apparently the world expects a different response. I get up and make Earl Grey tea and sourdough toast. I read an article about the death of the poet and fiction writer Kate Braverman, in which she is quoted as saying, “The character of a poet and a single mother is black humor in itself.” That’s me. Black humor itself. The Babadook’s soft-shoe routine. 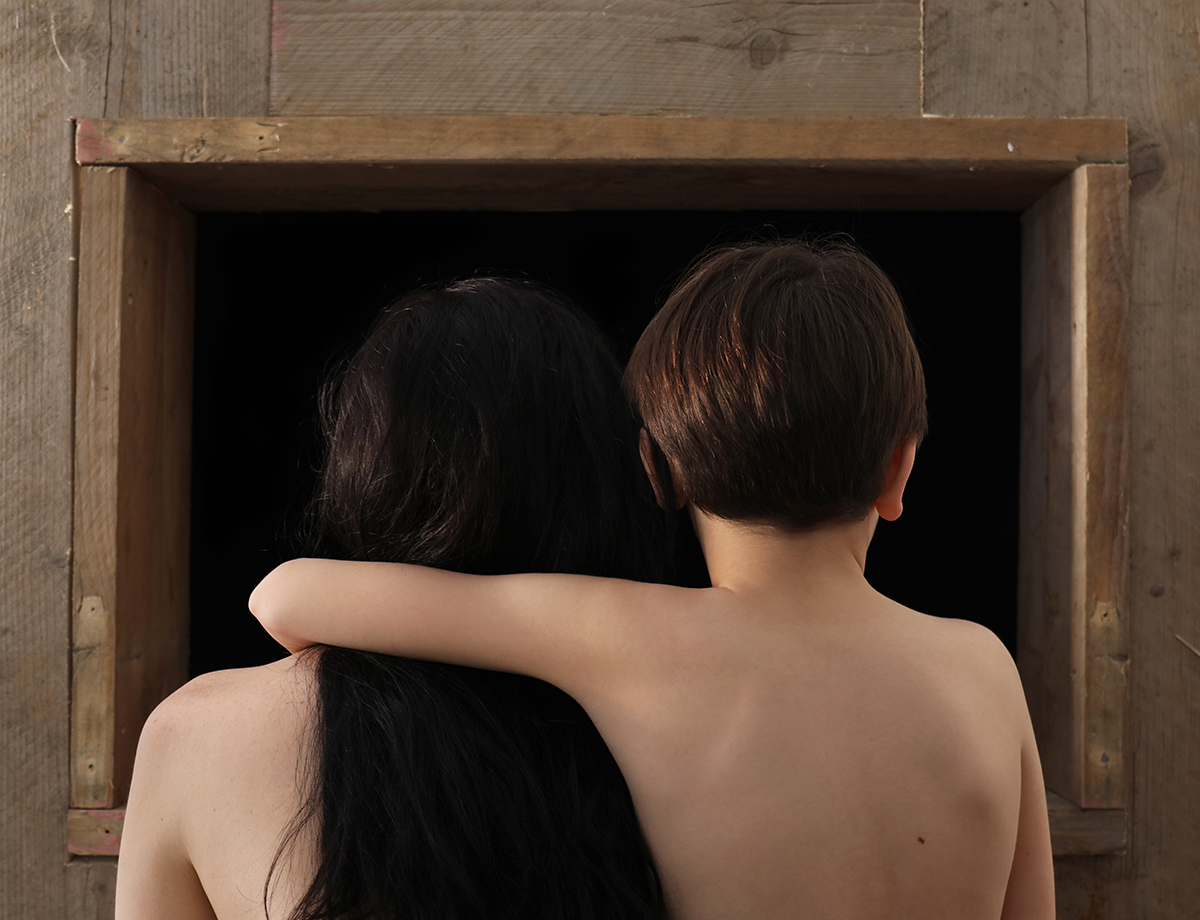 “The mother in this work seems vulnerable. She is no longer the nurturing figure but now needs the support of her child. The classical roles are being redefined…[T]he child’s maturity is visible in the way his arm covers his mother’s shoulder, a gesture of reassurance…The title implies the middle point between mother and child, their average, the place in which they meet as equals.”

I think of the vulnerability of the mothers in my family—myself, my mother, my grandmother. This unintended legacy. But as with any family trait, it’s difficult to see where one’s private shared reality ends and larger human realities begin. Mothers, it turns out, are human beings, ones who need a great deal of support from the world outside themselves in order to support their children. Oftentimes that support is sporadic, or flawed, or interrupted by unexpected changes in plan—death, separation, job loss or insecurity. Life.

Dothan’s image makes me think of my son climbing into my bed last night and putting his little arm around my neck and telling me he loved me, somehow still seeing me as his safe place despite our mutual meltdown on the way to soccer practice. The image also makes me think of my uncle John and my grandmother. John was born just fifteen months after my mother, who was my grandmother’s first child, and my grandmother seems in some ways never to have recovered from the shock of having to care for two babies largely by herself in the 1950s South. Then she had another son when her older two were young teenagers. My uncles were unexpected, but as my mother once remarked, the child who shows up in this way can often become the greatest friend to the mother. This was true of my uncles. John, the kindest, gentlest man you could ever meet, but with an indomitable spirit, was my grandmother’s rock after my grandfather’s death in his 50s. His presence comforted her when no one else’s could.

For that matter, I was unexpected and so was my own son. My mother claims to have made a choice to become pregnant at 18 years old, but what a surprise I still was to so many people. My grandfather apparently remarked, “Well, we could send her [my mother] to a home, like we did my sister,” to which my grandmother responded that if my mother left the house, she was going with her. There was much stubbornness involved in my showing up here, in life.

I was trying to work on an essay about motherhood, daughterhood, and life trajectory just before I found out I was pregnant at a writing retreat when I was 40, almost 41. Here is one of the things I wrote in my notebook two days before I took a pregnancy test:

Then my friend who, in all good faith, had been so mistaken as to bring me there, took me by the hand, and, removing me from the sight of the women, asked what was troubling me. Then, when I had rested a little and my lifeless spirits had revived, and those which had been expelled had returned to their lifeless estate, I said to my friend: ‘I had set foot in that part of life beyond which one cannot go with any hope of returning.’ Dante, Vita Nuova

It’s true that there was no hope of returning from the path I would embark on. I would never be the same again, my sense of my self-sovereignty, of my career, of my relationship to my family, to my art—all would change. But then motherhood is so unexpected, no matter what. Aren’t all children unexpected, in the sense that they aren’t who you were imagining them to be—how could they be? Every individual life is so surprising, so completely itself, even in the first few years of life. Every single life is so unexpected, and every death. All that remains, the thread we cling to, is the care woven throughout, much of which comes in the form of mothering, and—if we are lucky—care of the mothers.

“We are fearsome.” My grandmother said something like this just before her death last year. She was quoting a poem I wrote and also continuing to shape the family narrative even as she departed. Fierce, I think she meant. We are fiercely ourselves and know our own minds. I love the thought of us as fierce and fearsome when need be, of making our own paths, or at least of staunchly continuing on the ones we find ourselves on. We are all of that—the vulnerable fierce ones, the fearsome and gentle, our lives so separate and so intertwined from start to finish.

Poet and essayist Joanna Penn Cooper is the author of The Itinerant Girl's Guide to Self-Hypnosis (Brooklyn Arts Press) and What Is a Domicile (Noctuary Press). Her work has appeared in The Academy of American Poets Poem-a-Day feature, as well as South Dakota Review, Zócalo Public Square, Open Letters Monthly, Poetry International, and other journals. Cooper teaches online workshops in flash memoir and lyric essay for the journal Creative Nonfiction and the Muse Collective. She lives in Durham, North Carolina.