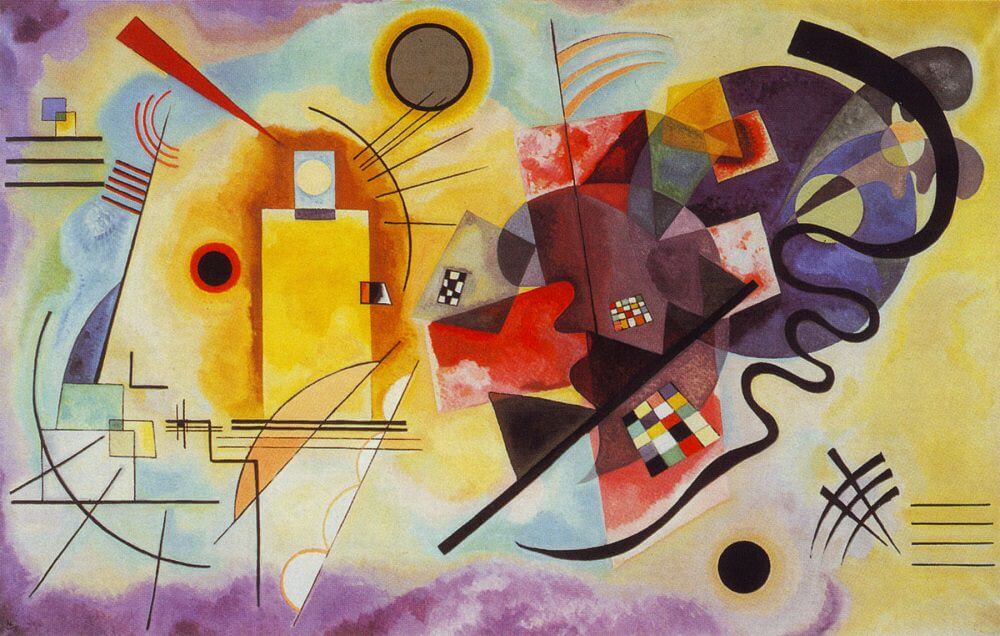 We’re all familiar with how traditional Western art forms were blown to bits in the early to mid-twentieth century. And we know the locus classicus for this in literature: T.S. Eliot’s The Waste Land, written in the wake of the First World War’s perceived destruction of civilization. Recall The Waste Land‘s characteristic phrases: “A heap of broken images;” “withered stumps of time;” “We who were living are now dying;” and the famous fourth line from the end: “These fragments I have shored against my ruins.”

In the visual arts as well, “fragments” became the dominant mode: fragments of color. Painters like Wassily Kandinsky, rejecting realism as bankrupt, created canvasses of abstract shapes of color — as in his 1923 “Composition VIII.”

And we can’t forget Jackson Pollock’s well-known “drip period” of the 1940s.

In music, the rejection of traditional form was expressed, for instance, in Arnold Schoenberg’s atonality: his now-famous “twelve-tone row,” developed in the 1920s. The absolute extreme of traditional form’s absence then came in John Cage’s notorious 1952 work 4’33”, which offers four minutes and thirty-three seconds of silence from the piano.

Throughout the twentieth century, Western artists in all genres continued to experiment with works that created their own structures and textures — and this has continued now into the twenty-first century. What interests me in all this is how some contemporary artists are beginning to reject the rejection of traditional forms. I’m thinking particularly of poet Jeanne Murray Walker, in her new volume of sonnets, Pilgrim, You Find the Path by Walking. 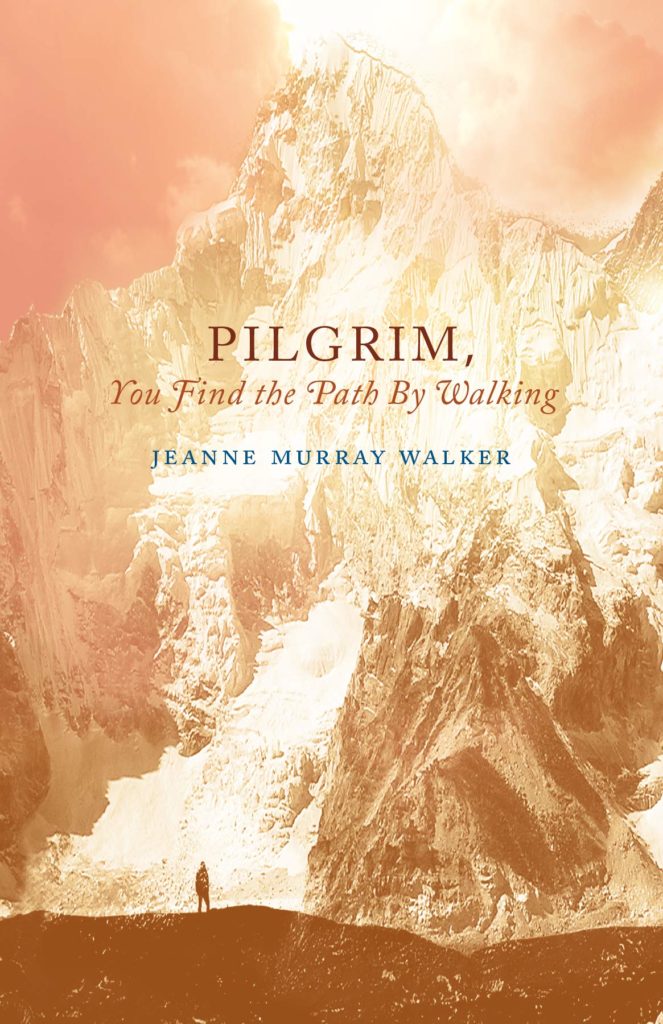 In a fascinating preface, Walker traces how she came, after seven volumes of free verse, to move into this most traditional of poetic forms. “Over the last decade,” she writes, “I have felt troubled by the flatness of much contemporary American poetry, my own included.” For around a century, she continues, “free verse” has ruled. Though “I love many Modernist and some contemporary poems written in free verse,” they “do not engage my body the way iambic lines do, lines that imitate the beating of the heart. Moreover, the reign of free verse has produced a lot that sails under the flag of poetry but turns out to be prose cut into short lines.”

I couldn’t agree more with that last statement.

(I’d just add parenthetically that much poetry in English has a form that’s between free verse and traditional strict forms like the sonnet or the villanelle: blank verse. As unrhymed iambic pentameter, its meter does “imitate the beating of the heart;” what’s “blank” about it is the absence of end rhymes. Some of my favorite modern poems are in blank verse, like Wallace Stevens’s “The Idea of Order at Key West” and W.B. Yeats’s “The Second Coming.”)

Walker’s preface goes on to narrate how, while teaching in Orvieto, Italy, where the sonnet was invented some five hundred years ago, she was inexplicably drawn to this ancient form. “It seemed, almost, to be alive,” “infused with a force I hadn’t suspected”—”a force of energy so great that the form itself felt sacramental.”

This began what she calls her “journey with the sonnet.” She sees it as a “pilgrimage”—tracing a path walked by innumerable people before you. Hence her title and subtitle: Pilgrim, You Find the Path by Walking.

Of course, when a contemporary artist returns to a traditional form, it’s not merely to imitate it but to explore its potential for our time. Poet Mark Jarman did this in his delightful 2000 collection Unholy Sonnets (playing on Donne’s Holy Sonnets). In Walker’s Pilgrim, You Find the Path by Walking, there’s constant inventiveness within the sonnet form. Many of the poems’ appearance on the page is strikingly un-sonnet-like, with line-breaks within a pentameter unit — like “Rock,” which begins:

Many of the poems play with the sonnet’s traditional rhyming, choosing slant rhymes so slanting they seem to be leaning on their elbow, grinning at their nerviness.

On her pilgrimage with the sonnet, Walker also tries it out for a range of moods. There’s the fun of the opening poem, “In the Beginning,” which opens:

It was your hunch, this world. On the heyday
of creation, you called, Okay, go! and a ball
of white-hot-gasses spun its lonely way
for millions of years, all spill and dangerous fall
until it settled into orbit. And a tough
neighborhood it was, too. Irate Mars,
and sexually explicit Venus, the scruff
of a moody moon, and self-important stars.

There’s the self-reflection in the book’s second section, as in the final lines of “So You’re Losing Your Memory?”:

In the attic of your skull, you can feel erasing
The Pledge, times table.
And your bruising
mistakes gone too.
You can live with yourself
and heal, and your voice grows less accusing.

She is on duty, grieving. Waiting till when
she gets some further dispatch—she’ll stay
where shadows swarm the landscape, where the fen
might swallow her, alive, as well.

To close, the book’s fourth and final section takes on a contemplative mood, meditating on silence. One of my favorite poems in the book is actually titled “Silence” and begins: is what, I think, I long for. Walker then evokes elements of nature that are distressingly (though a bit comically) noisy—for instance Rain slams its / fists against the leaves. Then she muses (with an example that of course makes me smile):

There may be no such thing
as silence. When John Cage tried to cage it,
his clean 4-plus minutes seethed with the circling
of his blood: his own heart sent it
lubdub lubdub around the concert hall.

Which takes her into the poem’s final hope:

But still I long for stillness, white and vast
as an Alp glistening in the sun, its tall
massive shoulders shawled with light. One last
finch flying — one mute speck on snow.

It’s not an accident, I’d say, that to evoke these final images of silence, Walker settles into a traditional sonnet closure, with its satisfaction of a rhymed couplet.

What is it about traditional form and texture in the arts that can be so profoundly satisfying? I think of American composer George Rochberg (1918-2005), whose return from serialism to tonality was precipitated by a personal crisis. As the New York Times obituary puts it: “after the long illness and premature death of Mr. Rochberg’s son in 1964, the composer found he could no longer continue writing serial music. ‘It was finished, empty, meaningless,’ he recalled. He began a quest for a musical language that would better suit his creative and expressive needs.”

The piece considered the culmination of Rochberg’s quest is his String Quartet No.3, which composer David Liptak (my neighbor and consultant on all things musical) calls “poly-stylistic.” Take a listen to the movement named “PartB: Variations;” you’ll hear a unique mix of classical and modern sounds.

In the visual arts, we’re also finding a return to traditional forms that incorporates a modern vision. I think of contemporary painter Lois Dodd, who has been creating windows for fifty years. There’s a long tradition in Western art of including windows within a painting, giving the intriguing illusion of seeing through the painting. Dodd has picked this up, but with (of course) a difference: her entire painting is a window, often life-sized, as in Barn Window with White Square (1991). 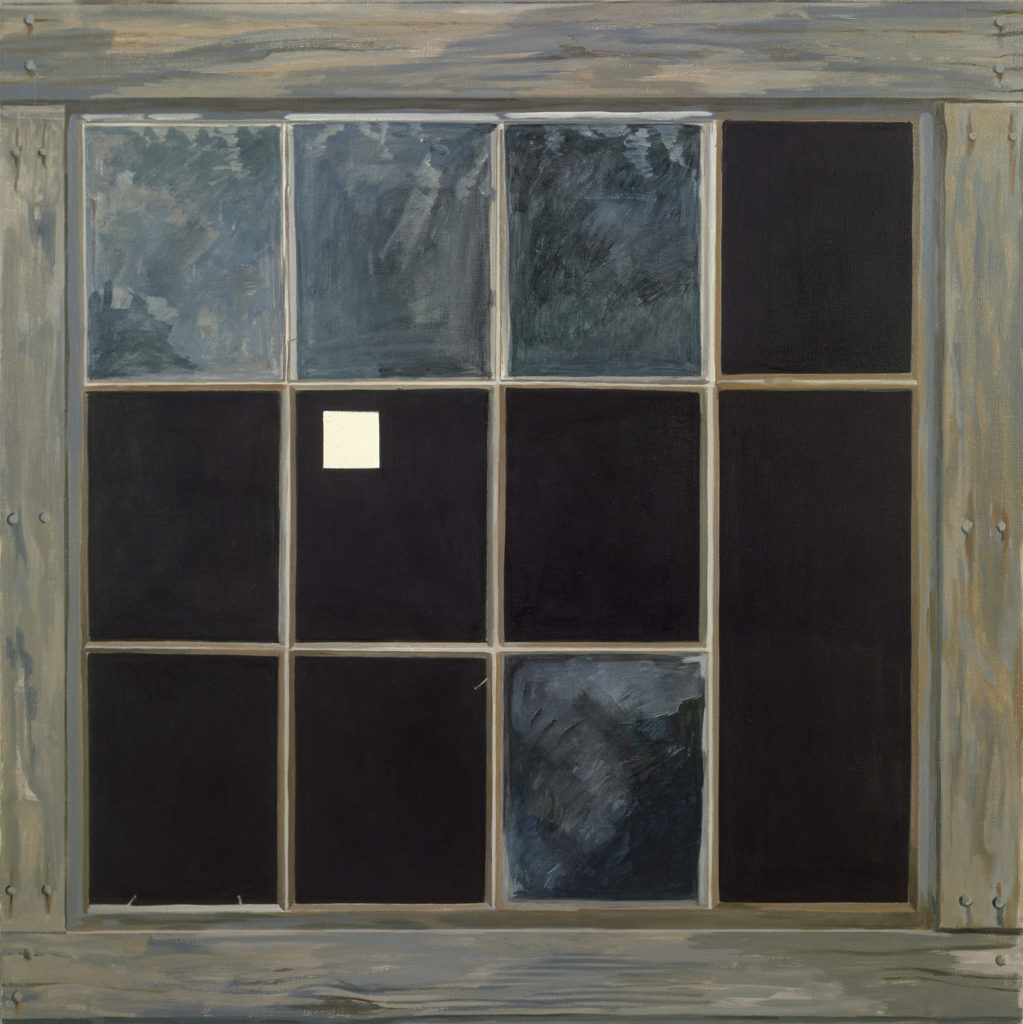 Lois Dodd, Barn Window with White Square, image courtesy of the artist and the Alexandre Gallery

I find the symmetry here both satisfying and stimulating, especially as it plays against the solid black of the absent panes of glass, with that tiny white square hinting at the representation of another window deep across the barn’s interior. Dodd has invented a painting style that is at once both representational and abstract.

As I gaze at this window, I feel drawn into mystery—but I want to give the last word on this to Jeanne Murray Walker. Toward the end of her preface, she writes about her many years’ pilgrimage with the sonnet:

I have discovered the form’s tractability, and I have been riveted by its mystery. A reader who enters a sonnet emotionally and cognitively willing — and who passes through it — can be significantly changed by the journey.… For me, at least for now, the sonnet feels charged with transcendent and transformational power.

It is ironic, and perhaps typical of the wisdom of the form, that in the process of writing a hundred sonnets, I have slowly discovered a plausible way of writing free verse again.

Peggy Rosenthal writes widely on poetry as a spiritual resource. Her books include Praying through Poetry: Hope for Violent Times (Franciscan Media), and The Poets’ Jesus (Oxford). See her Amazon Author Page for a full list. She also teaches an online course, “Poetry as a Spiritual Practice,” through Image’s Glen Online program.