In the freedom of all the things she had forgotten, she sketched on her arm
with her inkless pen, red lines running parallel, teaching herself basic
communication. The sting took her away, past the moon, and she was now
a nuqta and now a vowel. She learned trilateral roots of names of planets and
shades of anger. And that welts fade, that blood is poetic in every language, in every
instance of its having been spilled, for country or for self. She learned that
Betelgeuse is yad al-Jawza, and al-Jawza is Orion, and they have all spun in the arms
of the galaxy, coming full circle, because nothing is ever forgotten. And she learned
that Al-Wadud is God and God is Khuda.

Yad is hand.
Adab is manners.
Lahu is blood.
Nuqta is dot.
Al-Wadud is the Most Loving One. 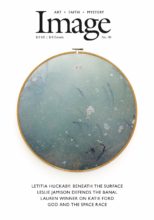