can be disconcerting take it from one
who’s been there hobbling on rubber legs
through fifty shades of graves to end up
riding down a metal tunnel that kept screeching
ha! haha! ha! your body strapped to a gurney

where (ha ha!) if you blinked the whole insane
scenario would have to be replayed and where,
at the nightmare hour, exhausted and confused,
you might almost be forgiven if you let
your guard down as I did one dark night

after weeks of drifting sideways down
the lonesome corridors of the indifferent hospital.
Surely the stone-faced technician
hunched over the demented ill-lit controls
had to be a Mossad agent or was he

KGB or CIA
or Walsingham the queen’s spy,
with a wrecked Jesuit wracked there
on the twisting ropes I can’t say for sure
except that that’s what paranoia does to you.

So, where’s this going? this nightmare scene
that will not let me be? And now it’s back to those
chiaroscuro corridors where they will close me
round and drill into my skull shunting
wires down my spine to fine-tune my sick brain

so it can rise again at last from the long dark night
it has spent these last months entombed in
and follow the flicker of what I take to be
an eastering light…me, there, among the crocuses,
all three of them, and all a lovely purple. 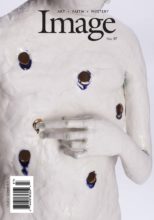