My father thought the Anglican liturgy pure poetry, once,
Three hundred people chanting in the multi-colors of the chancel,
Saying on cue We do! Though they might have answered
Otherwise in their own living rooms, together
They committed to many things, the dignity
Of every human being, the baby lifted high above
My father’s head, as in some ceremonial sense
Of his long-limbed, six-foot-three, a little thin
But with good bones, white-cassocked, dark-haired
Public self, splash of a maroon stole. He muscled
That small life up and down the aisles
As if he shouldered some new luck each one of us
Should hymn, finally laying the child in the arms
Of an old woman. Too weak to join the family
At the altar, she let out a brief cry. Just so
We might plant a tree that will never grow
Before we die. Just so my father,
Old navy officer, gathered his charges to sing
Though there were people they favored killing
Other side of the world, and some owned factories
The others had to work in, material cutters,
Machinists in the toy shops, the wages dust
Those men, those women sometimes took a match to
Late afternoons, Luba’s Tavern half a mile downhill
From the 3:30 buzzer, $3.12 an hour when I worked there

One college summer, sliding a circular saw just shy
Of my fingers, or turning the same screw
All dead-day long, the communion wafers of salt tablets
By the coolers, the floor fans idle for fear
Of what might fly and perch for an August lifetime
Under the eye, the drip of each minute some bored kid
Hanging over your shoulder, in a plugged-in instant
Ready to stir up trouble. We’d sleep for ten minutes
At ten and two, for a full half hour at noon,
Sprawled on stacked pallets we woke to the yawn
Of table saws that kicked back clouds of snuff,
The cut particle board rolling off the other end
Almost faster than we could catch and stack them,
Forklifts spinning 360s, 180s, leaving in their wake
The hot blast of the exhausted past, the breadth
Of our own day, that did not winnow through
Green-painted windows we pulled open with chains.
Air hockey, foosball games! They made thousands,
Never brought one home. Still, they played them
All night long, like some coy girl they haunted
And never quite made, her folded wad of cash
In the trust of her glass’s watermark,
Teasing her hair in the bathroom lull of the pub
For a drink or two, playing them all the way through
The Cabbage Patch Doll boom, the cars in three shifts
Parked up and down the road, my father’s pledges
The children of skilled weavers who skipped England
After World Wars I & II, and some were dark kids
Who sat with their mothers in the back pews,
Spun the rock to me Fridays and Saturdays,
The dead spots in the armory gym stealing the ball
Like some invisible point guard leaving you
Only air in the gap of your lost dribble.
Once I was ashamed, I was afraid to speak in public

My father’s public name, how he might never say a word,
Sitting with the farmer who with the family car
Backed over his own child and thought he hit the dog,
Saying nothing out of the ordinary, nothing more
Than that man’s name, over and over as the drive’s
Gravel flew again, the neighbors bringing alms
From their kitchens, as if the body must be fed
In the wake of the dead, or saying less, as if silence
Had its own dignity, its own music, and it wasn’t poetry,
Though it circled impossibly its own meaning
The way language does, the way a thing can never quite
Be its name, not in such a moment anyway,
And maybe that’s for God to say, if one can ever stake
A claim for the narrow of that inadequate name,
The way the word sweetness, say, the idea of it,
Never quite lolls honey on the tongue, never dribbles it
Out of the corners of your mouth, your love’s sweet spot
Mixing in your beard, till with the back of your hand
You wife that syrup, lick your fingers, and in the aftertaste
Poetry is there, if luck is with you, if your heart is full.
Or else I defer to the woman whose son lay in the bruise

Of a New York State prison, or was himself that bruise,
Where my father drove her all those years, since she had no car,
No other way to offer the tight vigil of the guards
Her pockets emptied of her son’s penance, of anything
She might have carried, shoeless for a moment
Before she passed the double-steel reinforced doors,
Crossed the courtyard, the snipers hidden
In their towers. What would she say? Who was the priest
Who came to her never bearing God’s name,
Offering rather something simple, a ride down the highway,
Waiting in the silence of his Tiparillos,
A ’67 Mustang that never purred, black as the clothes he wore,
Never geared to any practical thing, spark plugs,
Clean oil? Each night my father downed
A couple dry martinis, invited any neighbor to join him,
Never the woman he drove down the highway.
She was drunk the last morning he went to her door,
Every piece of him somebody’s funeral,
Formal, regal, almost military in his bearing,
The full stature of that frame leaning lightly against her railing
Until she swore she would never go back there again,
With him or anyone, So what are you always bothering me for?

We are only always becoming, we can never quite Be,
Each of us failing the office of our own names,
The three stories that house us, the given, the familial,
The one in between, as if there were something
The years can’t figure, each of us clouded
In the uncut crystal of our own nomenclature,
The cuckolded husband who never cried foul,
The seed glowing in the womb of the child,
Some new realm jeweling above the gossamer
Of the burgeoning woman’s unbroken hymen,
Strange as the stories of our own scratched soil,
The Earth itself sharing some tale of where
We’ve been, where we are going, some accident
We can never quite track, much less name,
My old neighborhood, my Italian friends,
What I once called them, drifting behind me
Like some mantra, some password
That has no meaning, doors that open nowhere
For anyone but for me always, rocking the way
When he was gone my father did one night
In the needlepoint of his mother’s favorite chair
And if he spoke I can’t remember anything
But the enormity of that calling,
God and his absence, against any utterance,
Not of the blood, the body only,
Melting on the tongue-tip the untold story. 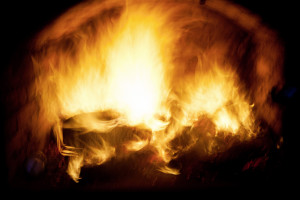