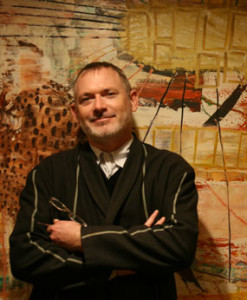 Alfonse Borysewicz makes paintings that yoke the austerity of near-abstraction with an underlying sense of beauty and grace. For many of us, his painting “Ash Wednesday,” which was the cover art for Image’s special 9/11 issue, was both a prophetic and a consoling work at a painful historical moment. Its cluster of black smudges, some morphing into crosses, against a background of shimmering gold, struck some viewers as the perfect embodiment of what the great Catholic philosopher Unamuno called “the tragic sense of life.”

Borysewicz is highly regarded in the New York art world, no mean feat for someone who has become more public about his faith. But that kind of integrity under pressure is what those who know him have come to expect from Alfonse Borysewicz. In his personal essay in Image he writes of his work: “Its struggles are historically Christian ones: living in the tension between the already and not yet; the encompassing breadth of the Spirit that brings joy and comfort; the immensity of sin; and Holy Mother Church which sustains.”

Some of Borysewicz’s work is featured in Image issue 32. 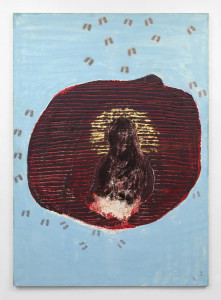 Alfonse Borysewicz was born in Detroit in 1957. He received a master’s degree in theology before studying painting at the School of the Museum of Fine Arts in Boston. Borysewicz has received two Pollock-Krasner Foundation Fellowships (1987, 1992) and a Guggenheim Painting Fellowship (1995). He has had solo shows at Richard Anderson Fine Art (1991-1999), Yoshii Gallery in New York and Tokyo (1993 and 1994), Simon Watson (1991), and Francine Seders (1999). Of his 1999 show at Richard Anderson, Jonathon Goodman of Art in America writes, “Borysewicz’s ability to invent a language of transcendence which is both traditional and of the moment makes him a compelling artist.” His paintings are primarily oil and wax on linen. The work develops through the physical act of painting. The accumulation of gestural and repetitive marks determines the surface pattern, density, texture, and vestigial imagery. The work draws the viewer into its interior space and invites a meditative response. This approach lends an earthiness which compliments the spiritual dimension but insists on the basic “humanness” of both belief and painting. 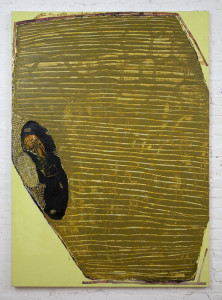 Over ten years ago I began several works for the Oratory Church of St. Boniface in downtown Brooklyn, NY (one of which is featured in Image #32). For a post-Lenten celebration of Eastertide, I have installed an iconostasis titled: Cor Unum (One Heart ). It is a four panel painting installation in the residence chapel at the Oratory (see below). The images depict organic forms obfuscating yet revealing the real life in Mary mother of Jesus, Agnus Deus, and Jesus of Nazareth. It is the center largest panel Signs from the Gospel of John that holds the focus. Clockwise from the right top corner is the raising of Lazarus, the vase holding the wine changed from water, the healed eye of the man born blind, Jesus walks on water, and the crippled man picking up his mat. From the center is the miracle of the loaves and fishes and at the top left the healing of the nobleman’s son. Sitting middle far left is the Madonna and Child: the seed of it all. This whole is brought together, again in living organic form, with the one heart beating its force in the whole of the painting. I would love to say this iconostasis was made with the chapel in mind. It was not. It was simply something I wanted to do and worked on it over the past few years. Recently, with 2004 being the 150th anniversary of the parish of St. Boniface, a small chapel project was initiated with my paintings serving as a welcomed guest on a wall that happened to have the perfect accommodating measurements. 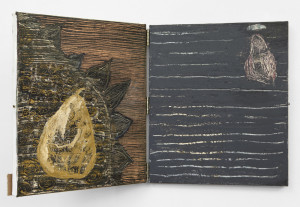 This summer I will be exhibiting several large works in “Large and Small” at Francine Seders Gallery in Seattle from July 9 through August 21. These paintings from different periods, collected from several past shows, all reflect my obsession with mystery, contemporary and ancient, orthodox and not, hitting heads with each other both in vibrancy and stillness.

This fall I will be exhibiting new paintings and glass works at Northwestern College in Orange City, Iowa. The exhibit is funded by a grant from the Lilly Endowment, Inc. With this two month exhibit I will be speaking of the joys and burdens of bringing faith-based Christian work into the cultural marketplace.