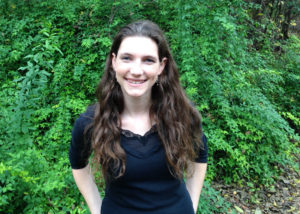 Fiction writer and essayist Allison Grace Myers has suffered her whole life from a condition called anosmia—the lack of a sense of smell. Given how intertwined smell is with emotion and memory, is it any wonder that coming to understand her condition prompted her to ask questions not only about perception but also language, her love life, and even God? Her essay caught our attention, however, not so much because her condition is unusual as because of her voice. In graceful, winning prose, she writes with humor, frankness, and energetic intellectual curiosity about a condition that, as she explains, tends to inspire curiosity more than pity. Her approach to writing about faith—both its beauties and its limitations—is likewise refreshingly honest and engaging: by first acknowledging what we don’t and can’t know, she is able to reveal the outline of the mystery.

Allison Grace Myers is an MFA candidate in fiction at Texas State University, where she holds the W. Morgan and Lou Claire Rose Fellowship. Her work has won Reed Magazine’s John Steinbeck Award for Fiction, and has appeared in Image and Crazyhorse. She and her husband (Image author Jason Myers) live outside of Austin, Texas.

I am currently completing my first novel, which follows a young interracial couple living in contemporary Atlanta as they wrestle with the complexities of religion, race, class, and identity. The protagonist Anna is a white twenty-seven-year old struggling to distance herself from her fundamentalist Christian past when her boyfriend, a successful black photographer, begins to question his atheism—a decision that exposes the cracks in their relationship and threatens to unearth secrets long kept buried. The story begins when Anna’s difficult and devout mother comes to live with them, forcing the characters to find a way to reconcile their pasts with the people they want to become. I view the book as an exploration of faith and doubt, of complicated love and the grueling work of forgiveness.

In my fiction, I tend to be drawn to characters who struggle with faith, or with its absence—who desperately want a religious experience but can’t seem to find it, or who are fighting against the influence of a faith that refuses to let go. I was raised Christian and, even as it has shifted and evolved over the years, my faith has always been integral to my identity—during times I found it easy to believe and when I found it more difficult. The characters in this novel all experience God in very different ways—in dogmas of personal salvation or of liberation theology; as an oppressive bully or as a giver of grace—and I’m fascinated by how these different relationships to divinity can cause tensions in human relationships, how our experience of the sacred is inseparably entwined with all other aspects of our lives.