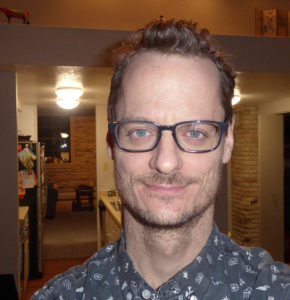 Austin Segrest’s poems are small miracles of compression. In the space of fourteen or so highly polished lines, in language that is by turns highly metaphorical and earthy, he creates fully realized sonic and psycho-spiritual worlds. His two recent poems in Image both inhabit the world of his Puritan forbears, a subject he returns to. They speak for a community controlled by the rhythms of agrarian life and of a stark, ambitious faith, conscious of having left the traditions of medieval English Christianity behind, thrilled with its freedom and spiritual seriousness—but also half longing for what was left behind. It’s an America that feels very distant from ours and yet still somehow haunts it. And so these are not merely period pieces, though their language pays clear homage to seventeenth-century poets like Herbert and Milton. The language gives a flavor of another time without ever feeling self-consciously historical. And you don’t have to look all that hard to see connections between, say, the way the Bible is described in the string of metaphors in “Plowboy’s Bible” and the way it’s used in American public life today. Segrest’s poems feel modern in their economy and granularity. In his hands, language is a palpable thing—the assured rhythms, internal rhymes, and repeated sounds create tightly woven soundscapes that are first of all beautiful to listen to, apart from any sense they convey.

Originally from Alabama, Austin Segrest teaches at Lawrence University in Appleton, Wisconsin, just south of Green Bay (up the north-flowing Fox River). A Sewanee Writers’ Conference scholar, he holds a PhD from Missouri, where he was poetry editor of The Missouri Review. New poems can be found in Southwest Review, Blackbird, The Cumberland Review, Ecotone, and Grist. He reviews poetry for Southern Humanities Review.

I like the old adage of the poet plowing her lines, and I like a well-worn book. In fact, I can’t seem to not completely ruin a book. I was a classics major in undergrad; it’s hard to say who got beat up worse—me or those old books. Only an average linguist, what I took to was the way that studying poetry in Greek and Latin externalized and materialized the expressive potential of language. I think this gets a poet a long way (I try to approximate it for my poetry students by having them wrestle with Milton). Perhaps the implied travel metaphor here isn’t entirely accidental, as I think of myself as a poet of both place and motion—of moving, muscular lines that observe and explore. Greek and Latin get you a long way if you’re comfortable with the company, that is: the tradition of past correspondents working the beat between language and nature. Once I started studying English poetry, I fell in love with the early modern period and all its upheaval—reflected, so we imagine, in the ramshackle awe of New England (we could all use a little ramshackle awe). Tuned to the substrata of American history, and making my way, via school and work, from the deep south to the deep north, I find myself becoming more and more observant of my environment—perhaps because these north woods, being foreign to me, demand translation: the kettle moraine contours, the evergreens and loons. Perhaps because of the pronounced seasonal rhythms—and climate change’s pronounced disruption of that pattern. You might call me a minor Elizabeth Bishop (who once called herself a minor Wordsworth).