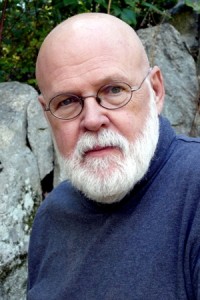 Saying that Barry Moser is an illustrator is like saying that Bach wrote ditties or that Shakespeare scribbled verse. Yes, the core achievement of Moser’s career is the production of world-class illustrations to some of the greatest literary works ever produced, including the Bible, The Divine Comedy, Moby Dick, even Alice in Wonderland. But Moser’s art is not merely secondary; it enters into a serious and occasionally playful dialogue with the text. It’s not that Moser sets himself up as an equal partner with the authors he illustrates. But he’s pretty darn close to being the ideal reader. His response is both an act of interpretation and an extension of the author’s own vision—and that’s a rare talent indeed. Moser is also a wonderful ambassador for the book itself. At a time when books feel like an endangered species, Moser’s involvement not only with illustration but also with booksmithing—exquisite typography, hand-made paper, traditional methods of binding—is a deeply civilizing force. Also, having grown up in a world marked by the rhythm of Bible-thumping, Moser has had every reason to call himself an “agnostic” and a “reprobate.” But from where we stand, he’s the most honest-to-God God-haunted soul we’ve seen in a long time. His illustrations of the Bible always humanize what tends to get etherealized; in that sense, they are more profoundly incarnational than the work of the religiously gung-ho. If you don’t know Barry Moser’s particular ability to link gravitas with hilaritas, his penetrating gaze into character and scene, his appetite for meaning, you should, ASAP.

Some of Moser’s writing has also been featured in Image issue 71. Read here. 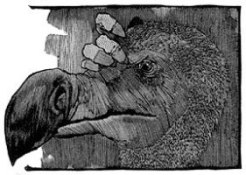 Barry Moser was born in Chattanooga, Tennessee in 1940. He was educated at Auburn University, the University of Chattanooga, and the University of Massachusetts. He studied with George Cress, Leonard Baskin, Fred Becker, and Jack Coughlin. His work is represented in The National Gallery of Art, Washington, The Metropolitan Museum, The British Museum, The Victoria & Albert Museum, The Pierpont Morgan Library, The Vatican Library, and The Israel Museum, to name a few. He has exhibited internationally, and is a member of the Society of Printers, Boston and an Academician of the National Academy of Design. In addition to being an illustrator, he is also a printer, painter, printmaker, designer, author, essayist, and teacher. He has served on the faculty of the Rhode Island School of Design;was the 1995 Whitney J. Oates Fellow in Humanities at Princeton University; the artist and writer in residence at Vassar College in 1998. He is currently Professor in Residence and Printer to the College at Smith College. He was the Elliott lecturer at the International Festival of Authors in Toronto in the fall of 2000 and the Third Flannery O’Connor Memorial Lecturer, Georgia State College, Milledgeville, Georgia in 2001. 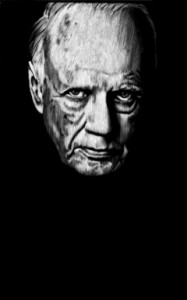 The books Moser has illustrated and/or designed forms a list of over 300 titles including the Moby-Dick, Frankenstein, and The Divine Comedy. Moser’s edition of Alice’s Adventures in Wonderland won a National Book Award in 1983. His Jump, Again! The Further Adventures of Brer Rabbit was a The New York Times “Ten Best Illustrated Children’s Books” of 1987. He has received numerous citations and awards from Communication Arts Magazine, Bookbuilders West, The American Association of University Presses, The American Institute of Graphic Arts. He won the prestigious Umhoefer Prize for Achievement in the Humanities from the Arts and Humanities Foundation in 2006. His work on the monumental Pennyroyal Caxton Bible was the only one-man exhibit ever to be mounted at the Library of National Gallery of Art in Washington D.C. by a living artist.

As of this writing I have on my desk illustrations and designs for Ovid’s The Amores (translated by Catherine Salmons); Sailing Alone Around the World by Joshua Slocum (to be published by Michael Bixler); Once Upon a Twice: A Cautionary Tale for Mice by Denise Doyen (Random House Children’s Books). In the wings, or on deck if you will, are Shut Up, You’re Fine: Troubling Poems for Troubled Children by Andrew Hudgins ( Overlook Press); The Spy Who Played Baseball by Carrie Jones (Godine); O, Harry by Maxine Kumin (Roaring Brook Press); and Salome, translated by Joseph Donohue (not yet under contract). I am also trying to find funding to launch a major production of The Canterbury Tales under my own Pennyroyal Press imprint.
I have no idea where I am going “creatively.” I hate that word anyway, it is so over-used it no longer has any meaning for me. The only thing that drives me is to do my next book better than the last one. Always trying to better my personal best.