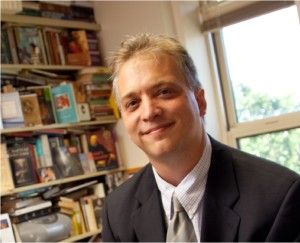 In an age of smallness, poet Brett Foster is willing for the mind to be large. A poet as well as professor of Renaissance literature (at Wheaton; his PhD is from Yale), he rejects the modern habit of subdividing human intellectual activity into specialized, isolated compartments—as if the mind were a modern university where no one is allowed to write about anything outside his immediate area of expertise. In Foster’s poems, theology, psychology, biblical scholarship, personal incident, reading, love—all are part of a seamless garment. At once playful and scholarly, emotional and intellectual, his poems use the lever of language to open human experience—in particular, our ongoing encounter with a transcendent and moral God. He demonstrates that raw feeling is not antithetical to a scholarly turn of mind, and that scholarship can coexist with graceful, elegant language. Maybe it’s the influence of Renaissance poets like Donne and Herbert, who could write about divine and bodily love at the same time, and of an era when you could be a musician, cartographer, inventor, painter, and botanist—when it was okay to think about everything at once.

Some of Foster’s work is featured in Image issue 51, issue 64, and issue 86. Read some of his poems here.

I was born in Wichita and grew up outside of Kansas City and in Jefferson City, Missouri. I always loved writing, and had some excellent teachers in high school. I went to college nearby in Columbia, at the University of Missouri. Primarily I was a journalism student, but I also loved English classes. Still, I was more inclined back then to read BMX Plus magazine than anything that remotely resembled literature. My focus in J-school was reporting and magazine writing, but I was increasingly enjoying poetry workshops. As I look back now, those different pursuits still seem consistent to me— they were just different ways of recognizing and working toward good writing. I managed to study in Oxford during my junior year, for an almost comically brief time, but it was long enough to read Renaissance literature seriously for the first time. I loved it, sometimes before I even understood it. Afterward, I earned an M.A. in Boston University’s creative-writing program. There I really discovered some of the English divines: Cranmer, Hooker, Donne, Taylor. I then had the good fortune of receiving a Steger fellowship, which took me to Stanford for two years. My Renaissance interests continued to grow, which led me back across the country and to doctoral study in English literature at Yale. Five years ago I joined the English Department at Wheaton College. I enjoy teaching both creative writing and Renaissance literature in Wheaton’s liberal-arts setting. I have co-written a book on literary Rome, edited a pair of volumes on Shakespeare and reception, and have published poems, translations, articles, essays, and reviews in various journals. And the rest? I try to find time to write and, when I find it, strive to write well. And I try to be decent and faithful to everyone, most of all to those whom I love.

My first book of poems, The Garbage Eater, will soon appear with Northwestern University Press. It should be available early in 2011. The title comes from an opening dramatic monologue, about spiritual severity. As for creative work ahead, all I know is that I’ve been writing poems more frequently than I have in a good long while. And for that I’m incredibly grateful.

I’m also working on a translation project. Cecco Angiolieri, a Sienese rival of Dante’s, caught my ear awhile ago. He had this incredibly brash voice that appealed to me, in part because it seemed so different from the ornate, courtly poetry that came to mind when I thought of medieval lyric. It’s been an interesting experiment in voice. Angiolieri values the colloquial, but he’s also engaged in fairly sophisticated parody. I have rendered about fifty sonnets so far, and am aiming for a representative “selected” volume.

Turning to scholarship, a biography of Shakespeare is due out soon in a “Backgrounds to Shakespeare” reference series, and I have also completed a study of English encounters with Renaissance Rome. Finally, I am in the middle of Great Love Poems of the English Renaissance, a book that will be both an anthology and a collection of brief essays meant (if I’m writing them well) as readable commentaries. This project combines my interests wonderfully. And writing about love is never boring, or shouldn’t be.