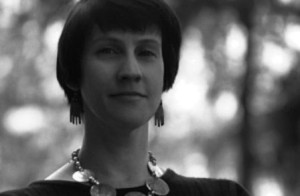 Catherine Sasanov is the author of the poetry collection Traditions of Bread and Violence (Four Way Books, 1996) and the theater piece Las Horas de Belén: A Book of Hours, commissioned by Mabou Mines Theater Company in 1997. Poems from her recently completed manuscript, Raise the Dead Inside My Given Name, can be found in Agni, Field, Image,America, Marlboro Review, Salamander, Virginia Quarterly Review, and Mexico’s Debate Feminista.

In recent years, Sasanov has received grants from the Ludwig Vogelstein Foundation and the Rockefeller Foundation’s Mult-Arts Production Fund. She has also received two awards from the National Endowment for the Arts: a Literature Fellowship in 1997 and a Creative Artist’s Residency in Mexico City in 1995. During this 3-month residency, co-funded by Mexico’s Fondo Nacional para la Cultura y las Artes, Sasanov was in residence at the shrine of Our Lady of Guadalupe researching its extensive collection of votive paintings for a poetry project utilizing exvoto imagery. (The poem “Some Words for an Anonymous Exvoto Raised to Our Lady of Guadalupe,” which will be published in Image issue 26—spring 2000—was written as a result of that residency.) Sasanov has held other residencies at the MacDowell Colony, Hedgebrook, the Vermont Studio Center, Virginia Center for the Creative Arts, the Sundance Institute, and the Rockefeller Study and Conference Center in Bellagio, Italy.

Sasanov’s theater piece, Las Horas de Belén: A Book of Hours, opened in New York City and Mexico City last year. A bi-national collaboration between three U.S. and three Mexican artists,Belén will be produced at P.S. 122 in New York City, California State University-Northridge, La Capilla in Mexico City, and the New World Theater Festival in Amherst this year. A CD of the songs from Las Horas de Belén (lyrics by Catherine Sasanov/music by composer Liliana Felipe) will be released this year as well.

Sasanov, who was born in Rockford, Illinois, currently lives in Cambridge, Massachusetts where she teaches creative writing privately out of her home.

“At the end of December, I finished work on my second collection of poetry, Raise the Dead Inside My Given Name, and have begun sending it off in search of a publisher. And now, after having left the subject for the past few years, I am returning to a study of exvotos, this time the votive paintings of southern Germany. My father’s ancestors originally came from Bavaria, the part of Germany from which many of these paintings originate. And while I am not interested in writing a series of poems based on family history, it interests me to see how this cultural tie with German exvotos might influence my approach to writing about these miracle paintings.”

“At this time, I am also enjoying the fact that Las Horas de Belén: A Book of Hours is starting to tour. The work explores the lives of women locked away in Belén, a sanctuary founded by Mexico’s Catholic Church in 1683 for single women without means of support. Mexico City’s church saw these women as too morally dangerous to run free, so it locked them away until their death. The unvarying days of work and prayer in Belén drove many women to commit suicide or go mad. It later became one of Mexico City’s worst prisons. While it was finally torn down in 1935, many of the prisons Mexican women find themselves in (religious, domestic, economic, institutional) haven’t changed much since the fall of Belén. As I was finishing work on Belén, I learned of its modern day counterpart, Ireland’s Magdalen Laundries. This really struck me: those laundries weren’t a part of Mexico or the distant past, but something chillingly closer to my own Irish-Catholic heritage.”

“I find I know God only through the physical, and I am very drawn to those places where the spiritual and carnal most deeply, and often most violently, intersect. Fragmentation of the body (through the relics of great saints and great sinners) and vellum religious texts (spiritual books written on the flesh of butchered animals) are two examples of images I turned to while writing my second book of poems. When I write, I surrender myself to the imagery I grew up with as an Irish-Catholic and let it take me where it wants to go, not to where I think it should lead me. This sometimes brings me to disturbing places in my work, but the process itself always feels right. Heaven’s become populated in recent years with more and more of my intimate dead. There’s a part of me that wants to believe that if heaven can be addressed, it will have to exist.”