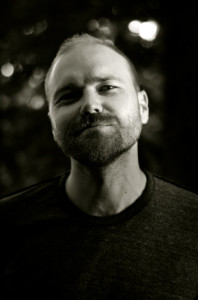 As a prison chaplain with Tierra Nueva in Washington State’s Skagit Valley, Chris Hoke works with men whose lives are marked by gangs, addiction, violence, and mental illness. In his recent book Wanted: A Spiritual Pursuit through Jail, Among Outlaws, and Across Borders, he writes about this world with a blend of humor, tenderness, and humility. He doesn’t portray himself as offering solutions to the men he counsels, but as a listener, first to them, then to God. It’s that stance of listening that keeps the book from being self-congratulatory. Hoke isn’t the hero of this story; he’s just the narrator. His keen, sensitive observation of people and dialogue and his economical prose allow us to see men with messy, violent lives as fully human, not stereotypes—and fully loveable, because it’s clear Hoke loves them, too. In the book, Hoke witnesses a lot of pain; with poverty and the instability it brings, evil and suffering are right out there in the open. But the stories also reveal an aspect of Christian belief that is more raw and urgent than what so many of us experience week in and week out. Hoke’s is a refreshing voice bringing news from a world we might otherwise overlook.

Some of Hoke’s work is featured in Image issue 84. Read an excerpt by Hoke here from his book, Wanted.

Chris Hoke is a jail chaplain and pastor to gangs and violent offenders in Washington’s Skagit Valley. Through his work with the organization Tierra Nueva he co-founded a coffee-roasting business, Underground Coffee, which employs men coming out of prison and addiction, and connects them to agricultural partners in Honduras and cafes and customers in the Northwest. Hoke received his BA from UC Berkeley and his MFA in creative nonfiction from Seattle Pacific University. Hoke’s work has been featured on NPR and in The Sun, Portland, Sojourners, Image, Modern Farmer, and Christian Century.  His first book, WANTED: A Spiritual Pursuit Through Jail, Among Outlaws, and Across Borders was recently released by HarperOne in February 2015. Most recently, the former gang leader who first dubbed him pastor (a central character in WANTED) is now working alongside Chris at Tierra Nueva in gang outreach, traveling, speaking, and writing.

As I pull myself back to my desk in the wake of WANTED, I am facing three different directions for my next project.

In my books’ final chapter, I chronicled my friend Neaners’ spiritual transformation in solitary confinement—over several years in a Washington State maximum security prison. I called it “Fire in the Hole.” I struggled to reconcile both the cruelty of our nation’s isolation sectors where my friend was stuck, and the rich inner experiences he was having, reported to me in prison-stamped letters, that were not unlike the “fire” language of the mystics I was reading at the same time.

Though that chapter came to a close, it was just the beginning of my fascination with America’s mass incarceration crisis, on one hand, and an exploration of monastic spaces and spiritual practices on the other. Can the monastic tradition be rekindled— and spread—through the belly of the beast of the growing prison system in our land? I began to write short, narrative snapshots along these lines for the Image Good Letters blog, and called it “Monasticism In Lockdown America”: old men facing death in prison and the Holy Elders tradition; gang cell “burpee exercises” and Eastern Orthodox bowing; breathing and embodiment; asceticism and the cleansing of memory; mental health and holy fools. I’m considering pursuing these portraits into my next nonfiction book. That’s Option One.

Option Two: as Neaners and I traveled together and read from WANTED’s “Fire in the Hole” in universities, churches, and bookstores, it was clear we needed to write—together—the larger saga of our relationship. It would be a braided memoir about how a white, overchurched kid and a Mexican gang member, only two months apart in age, grew to become friends, brothers, and now coworkers. It would follow the story of how he welcomed me into his hidden world of migrant youth, streets, gangs and prison life, and how I eventually welcomed him and his daughter into my home with my wife, and how we now partner in bridging those worlds. It would be a meditation on the New Testament understanding of the alternative family in an age of fractured homes and social division. It would be called Thicker Than Blood.

But Option Three sings loudest in my head lately: a novel set in this Skagit Valley that continues to enchant me. As a nonfiction writer, I thrill at the prospect of riding off the rails of “what really happened,” following my imagination, lying a world into existence. My notebooks are increasingly full of sketches involving meth dealers, young Iraq veterans who are now prison guards, the Whidbey Island military base, the shack of Northwest poet Robert Sund that perches amidst the tidal marsh at the mouth of our valley’s Skagit River, blackberry wine, prison pruno, and lots of barn swallows lacing through the rain and sunshine of this story.

As I consider these three options, readers’ feedback is very welcomed. Email me at chris@tierra-nueva.org or find more information here.