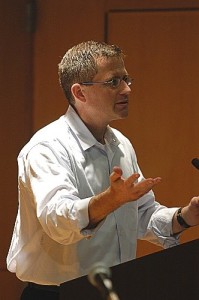 Christian Wiman is a welcome voice in contemporary poetry. His is a gracious, impassioned intellect, full of both energy and gravity—and here is a broadly read writer who affirms the value of timeless religious questions. Wiman brings the drive and seriousness of his west Texas upbringing to his editorship of the venerable Poetry magazine, using its prominence as a lever to get more people reading good poems. A poet in his own right, Wiman writes vivid, clear-eyed works that are at once colloquial and elegant. As an editor he is committed to finding new voices, and to making the magazine a platform for lively and sometimes controversial discussions, with forums on questions like whether poetry should survive—and whether Garrison Keillor is good for it. In poetry’s ancient territorial battle between elitism and populism, Wiman refuses to let the definitions become oversimplified. He is also a prolific and engaging essayist. Along with the possibilities of poetry, his great subject is doubt. “Honest doubt,” he wrote recently in the Harvard Divinity Bulletin, is different from an ironclad commitment to doubt itself. Honest doubt is painful, “but its pain is active rather than passive, purifying rather than stultifying. Far beneath it, no matter how severe its drought, how thoroughly your skepticism seems to have salted the ground of your soul, faith, durable faith, is steadily taking root.” Wiman was raised in a conservative Baptist home, and when he left for college, his faith “fell away,” as he puts it. But the sense of its absence never left him, and when he was older, it reemerged—and it quietly pervades all his writing.

Some of Wiman’s work is featured in Image issue 60, issue 73, and issue 81. Read a poem by Wiman here and an interview with him here.

“I was born in west Texas in 1966 and spent the first seventeen years of my life there, but I’ve since lived in many places. I was an undergraduate at Washington and Lee University in Virginia; never made it to graduate school, but I did spend a couple of years at Stanford on a Wallace Stegner Fellowship. I traveled for a few years (England, Prague, Mexico, etc.), taught for a few years (Stanford, Northwestern, Lynchburg College in Virginia), and since 2003 have been the editor of Poetry in Chicago, a city I’ve come to love. I’ve written three books, two of poetry (The Long Home and Hard Night) and one of prose (Ambition and Survival: Becoming a Poet).”

“I’ve just finished a new book of poems, which I’m tentatively calling Every Riven Thing. It’s been seven years in the making.

I’m also working on a prose book titled My Bright Abyss: Meditations of a Modern Believer, which is comprised of chapters made up of brief, discrete sections organized around a single theme. “God’s Truth is Life,” which appeared in Image, is an example, though a bit unique in that it’s focused on poetry. The rest of the book is not, though there are certainly many poems quoted throughout. I hope to have it finished by the end of the year, but I tend to be over-ambitious with my deadlines.”