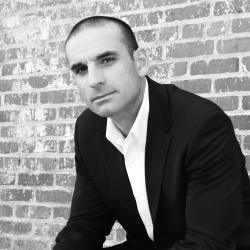 Daniel Siedell is a cultural ambassador for a new age. His 2008 book God in the Gallery: A Christian Embrace of Modern Art offered a suspension bridge over the old culture war-era chasm between Christians and the art world, inviting Christians to release the old understanding that contemporary culture is godless and destined for self-destruction, and suggesting instead that we can listen and learn much from new art. In an Image web interview, he said: “It is a cliché, but I would suggest that one must approach contemporary art with an open mind. There is an ethical component here. Attending to those details, looking closely, is a useful discipline for us as Christians, who are supposed to see Christ everywhere, especially in the faces of all people. If we dismiss artwork that is strange, unfamiliar, unconventional, if we are inattentive to visual details, how can we be attentive to those around us?” More than a critic, Siedell also participates in the making of art, and in making art accessible: for over ten years he has worked collaboratively with painter Enrique Martinez Celaya, whom he profiled for the Image issue 70. Siedell has recently set aside an academic career in order to head up Martinez Celaya’s Florida studio, Whale and Star, where he’ll work on a number of interdisciplinary projects involving books, lectures, music, artists workshops, and more.

Some of Siedell’s work is featured in Image issue 70. Read one of his essays on the work of Enrique Martinez Celaya here.

Daniel Siedell recently joined the Miami-based studio of Enrique Martínez Celaya as director. After a decade collaborating with the artist on exhibition and publishing projects, he will oversee all aspects of the studio, including the publishing house, Whale & Star Press. Previously he was Professor of Modern & Contemporary Art History at the University of Nebraska-Omaha and from 1996-2007 he was Chief Curator at the Sheldon Museum of Art, where he organized numerous exhibitions and worked with a number of contemporary artists. He has a B.A. from the University of Nebraska (1989), an M.A. in art history, theory, and criticism from SUNY-Stony Brook (1991), and a Ph.D. in post-World War II art and criticism from The University of Iowa (1995). He writes on the critical reception of Abstract Expressionism, theology and ethics in contemporary artistic practice, and has written extensively on the work of Enrique Martínez Celaya. His publications include Weldon Kees and the Arts at Midcentury (University of Nebraska Press, 2003), Martínez Celaya: Early Work(Whale & Star, 2006), God in the Gallery (Baker Academic, 2008), and An Excavation of Tenth Street: Essays on Abstract Expressionism (Forthcoming, Whale & Star Press, 2011). He is a Fellow at the Center for the Theology of Cultural Engagement, Portland, Oregon.

Whale & Star Press will publish several books this year, including a collaboration with the Canadian band, The Cowboy Junkies, and a collection of my essays on Abstract Expressionism. I continue to oversee The Lecture Project, in which we invite twenty philosophers, art historians, and curators to the studio over a three- to four-year period to present formal lectures addressing ideas that have influenced artists’ choices, both inside and outside the studio. Enrique Martínez Celaya and I also just completed our second annual summer workshop, in which we select fifteen early- to mid-career artists and spend the week in the studio giving lectures, offering critiques of their work, and participating in formal and informal discussions that help artists think about their work.

In October the Miami Art Museum is exhibiting Schneebett (Snow Bed), a complex installation that Martínez Celaya originally presented for the Berlin Philharmonic in 2004, and re-presented in Leipzig in 2006. It uses Beethoven’s long convalescence before his death as a means to reflect on the nature of art and its capacity to help us understand life–particularly our experiences of exile and longing. Gifted to the museum by the German collector Dieter Rosenkranz, Schneebett (taken from a title of one of Paul Celan’s poems) is a two-room environment that consists of a large bronze bed kept frozen by a large humming compressor, a large painting with tar and feathers of a snow-filled forest, broken birch branches, and a single chair. We are currently working with the museum to adapt the work to the warm and humid conditions of South Florida.