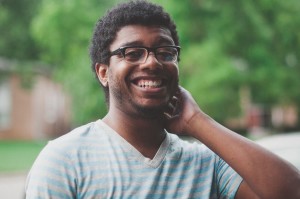 Derrick Austin is a poet of the five senses. His work reveals a deep love for the look and feel of surfaces, for textures and smells, for visual geometries and qualities of light. His poems offer sustained attention to the senses. Through a slow, meditative accumulation of tactile images he presses towards surprising moments of self-revelation. The hallmark of his poems is a lush eroticism laced with a sense of quiet sadness. His approach to the world is at once deeply embodied and drawn toward the transcendent, with an equal love of austere beauty and of bodies in their messy frailties and appetites. His most theological poems tend to draw on the visual arts: the frescoes and mosaics and paintings that have transmitted the magnetic and troubling Christian story across the centuries. Because of his vivid sense of touch, it seems fitting that he’s particularly drawn to Byzantine mosaic, an art form made of tiny fragments arranged painstakingly by hand. Mosaic is, at one level, all surface, but it uses surfaces to create something weighty, emotional, and complex.

Austin’s work can be found in Image issue 80. Read a poem here.

Derrick Austin was raised on the Florida Gulf Coast and earned his BA in English and Writing from the University of Tampa. He is currently an MFA candidate in poetry at the University of Michigan. He is a Pushcart Prize nominee and a two-time Best New Poets nominee. His work has appeared or is forthcoming in New England Review, Crab Orchard Review, Memorious, Unsplendid, Assaracus, Tampa Review Online, and other journals.

At the moment, I’m working on my first manuscript, Trouble the Water. Set along the Gulf Coast and Europe, it’s an exploration of the intersections of landscape, sexuality, religion, and race. “Byzantine Gold” is part of a series of ekphrastic poems meditating on artworks from the early Christian period through the Baroque. I’m fascinated by their sensuality–the luxe materials and, starting in the Renaissance, the revived attention toward the body. As a black queer writer, I’m attentive to the ways in which bodies and images are read; the tensions that exist between my sexuality and a spiritual tradition I find deeply enriching and frustrating at times. Through poems that respond to natural and man-made disasters, the beauty and silences in visual art, and the joys and sorrows of queer love, the collection attempts in its small way to speak toward a union with something larger: landscape, community, tradition, a beloved. It is intimacy the poems explore, which, in its own way, is a kind of knowledge.