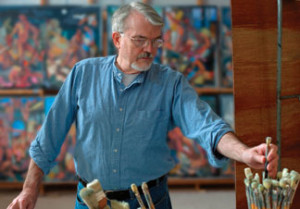 Edward Knippers is, without a doubt, one of the founding fathers of contemporary efforts to explore the relationship between Christian faith and the creation of outstanding new visual art. He has given generously of his time as speaker and panelist at innumerable conferences and arts festivals. He’s taught at Image‘s Glen Workshop. He’s also been a leading light in Christians in the Visual Arts, and many other projects and causes. He’s an avid collector who is now beginning to share the gift of his discerning eye with thousands of others by making a traveling exhibition out of his treasures. But above all he is a painter—a painter whose vision, at once deeply traditional and radically contemporary, has been central to the revival of biblical narrative in the visual arts. His paintings are dramatic tableaux, Baroque in their expressive intensity and theatrical settings; they do what many art historians have said could never be done again: make the classic biblical subjects come alive in paint.

Knippers’s vision is profoundly incarnational, restoring the human body to its central place as the locus of the divine/human encounter. His work has occasioned controversy—it’s been banned and even mutilated. We find this ironic, because no one is more orthodox in his theology than Ed Knippers. But even in the midst of controversy, he remains gracious and ready for dialogue. We’re proud of his long association with Image.

Some of Knippers work is featured in Image issue 3. 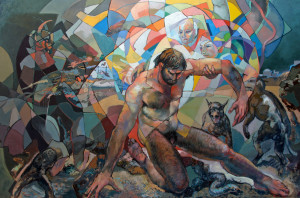 Edward Knippers is a nationally exhibited artist known as a figurative painter of biblical subjects. He has had over 100 one-man and invitational exhibitions including a four-person show at the Los Angeles County Museum, and one-man shows at the Virginia Museum, Richmond, the University of Kentucky, Lexington, and the University of Oklahoma, Norman. Knippers’s work has been published widely, including by Life magazine andChristianity Today, and is found in numerous public and private collections including The Vatican Museum, Rome, Armand Hammer Museum, Los Angeles, the University of Oklahoma, Norman, and the Billy Graham Center, Wheaton, IL. 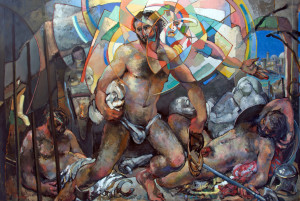 “At present I am working on a series of smaller works on the Passion of Christ. It consists of twenty-five 32 x 24-inch panels, four of which depict the parable of the prodigal son. I see this as a possible traveling show. At the same time I also have four larger paintings that are in various stages of completion: The Temptation of Our Lord (6 x 8 feet), Ash Wednesday(Christ Heals the Demon Possessed Man) (8 x 12 feet), and two works dealing with Christ and what is seen by many moderns as the classical alternative—-the world beyond the moral dilemmas in which the sensually and intellectually educated live. The working titles of these works are Idyllic Passion and Soldiers Bathing. They are both 8 x 12 feet in size.”