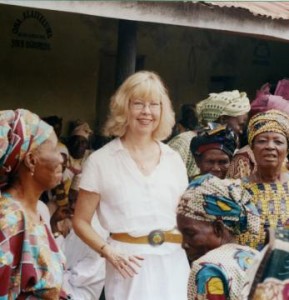 Elaine Neil Orr tells the truth about the way modern westerners think. Perhaps because she was raised in Nigeria, she has some critical distance from the American mind. Though the language of psychology allows us to sanitize and dissect our pride, fear, hunger, and self-absorption, the ancient demons have not been eradicated. They live with us even in our quietest moments, among the gentlest and most cerebral of people. In her fiction, Orr paints this phenomenon unsparingly, with a wry, light touch. Her prose is a pleasure: energetic, surprising, and perfectly matched to the mind of her characters. The result is at once comic and devastating. In her story “Day Lilies,” we can laugh at the main character’s narcissism, but her mind is drawn so carefully, her foibles presented with such honesty, that we can’t really distance ourselves from her. Like Chekhov, Orr isolates small, emotional movements so as to illuminate their cataclysmic significance. Her subject is the ethics of love, not just as an emotion but as a choice that transforms us, a force that can break the spell of contemporary self-obsession. Photo: Ojo Olafimihan, Legacy International.

Some of Neil Orr’s work is featured in Image issue 54. Read an excerpt by her here.

Elaine Neil Orr was born and spent most of her childhood in the southwestern region of Nigeria where her parents were medical missionaries. Her Nigerian name is Bamidele Funmilayo, making her full name Miriam Elaine Bamidele Funmilayo Neil Orr, a complicated inheritance. With her parents remaining behind, she left Nigeria with a one-way ticket to the U.S. in 1970, six months after the conclusion of the Biafran War. At seventeen, she didn’t grasp what she would later come to know much later, through end-stage renal disease, transplantation, and the writing of a memoir: she was an exile in America, a white foreigner in a country that assumed her belonging.

Elaine began graduate work at the University of Louisville with an aim to write poetry but being captivated by Henry James and contemporary American writers such as John Cheever and Joan Didion, she veered in a scholarly direction. She began Ph.D. work in Literature and Theology at Emory University. A son, Joel, was born in the second year of her course work and she veered again, toward women’s studies and Tillie Olsen. Elaine is the author of two scholarly books, Tillie Olsen and a Feminist Spiritual Vision and Subject to Negotiation: Reading Feminist Criticism and American Women’s Writing. When she became a full professor, Elaine came full circle back to creative writing.

Her memoir, Gods of Noonday: A White Girl’s African Life (Virginia, a Book Sense Selection), takes her back to Nigeria. Elaine has won writing grants from the NEH and the North Carolina Arts Council and has received residency fellowships from the Virginia Center for the Creative Arts and Hambidge Center for the Creative Arts and Sciences. Elaine is married to Andy Orr. She teaches literature and creative writing at North Carolina State University and often teaches in the Low-Residency MFA in Writing Program at Spalding University.

Since the publication of Gods of Noonday, I’ve been writing and publishing creative non-fiction (“Dieting in Africa, a Pushcart Prize nominee, and “My Life with Hair,” both in The Missouri Review, “Southern Nigerian” in Southern Cultures, and “Light Studies” inThe Louisville Review) and fiction (stories in Image, Southern Cultures, and forth-coming in Shenandoah) and some poetry about kidney failure and dialysis.

My primary project is an historical novel set in 1855 in Yoruba land (southwestern Nigeria). As I was writing my memoir, my mother gave me an old mimeographed copy of the unpublished line-diary of the first Baptist female missionary to Nigeria. I was hooked, knowing from my mother’s life much of what this woman didn’t record. At first I planned a creative non-fiction project, imaginatively filling the gaps. But soon I discovered that what I had to write was a novel: about this woman and her husband, about his coming back from his first mission tour, a self-educated former Texas Ranger, thirty-nine years old, now a missionary to Africa, gaunt but handsome, finding her in Greensboro, Georgia, a twenty-one year old, refined, college graduate from a wealthy, slave-holding family, her falling in love, then sailing within weeks of marriage to the West African coast. They bury a baby; he becomes ill. They live in a town in which they are the only white people, far from outside help. What will my heroine do? I had to invent another character to help answer the question, a Yoruba man named Gabriel.

In November of 2007, my adult son accompanied me on a research trip to Nigeria and I felt again how all of my writing is autobiographical. The characters who inspire my story actually founded the mission station on which I was born. I’m always excavating a particular past. I’ve finished a draft of the novel and will be spending the year working on revisions, beginning at the 2008 Bread Loaf Writers’ Conference at Middlebury College in August.