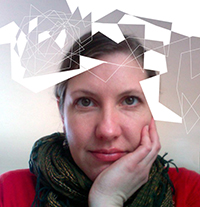 Seattle-based artist Gala Bent draws strange fairytale landscapes occupied by appealingly hued creatures and forms that hover between abstraction and figuration. In her profile of Bent in Image issue 82, Hannah Faith Notess describes Bent’s gouache and graphite technique this way: “Misty, watery washes reminiscent of a rain-soaked Northwest sky appear in the drawings’ backgrounds…but Bent also uses bold, bright layers of the opaque gouache pigments. The same medium can create both a runny, watery background and a jewel-like faceted miniature form…. Bodies are always in motion in Bent’s drawings, which make frequent use of animal-like figures that, while never quite realistic, seem physically plausible. Natural forms and the organic textures of hair, skin, and water weave in and through geometric shapes that seem to hail from the world of abstract ideas…. Though her work takes a keen interest in the natural world, Bent is not tied to the literal landscape, as it might be photographed or painted in plein air. Instead, she’s interested in the way nature sticks in the mind that perceives it, transformed by memory and imagination.”

Gala Bent is an artist, mother and educator living in Seattle, Washington. She has a BFA in Painting from Ball State University in Indiana and an MFA in Visual Art from State University of New York (SUNY) at Buffalo, and currently teaches full time at Cornish College of the Arts. Drawings on paper, colored with gouache, are her most prevalent medium, but she also works, when possible, with installation, animation and writing. Gala’s work has been shown locally, nationally and internationally, and she is represented by G.Gibson Gallery in Seattle.

I have a solo exhibition open from March 5 to April 18, 2015 at G.Gibson Gallery in Seattle called “A Chorus for the Multiverse.” This work (some of which is shown here) grew out of both a fascination with and an inability to comprehend contemporary cosmology that includes the possibility of an infinite number of possible universes—The Multiverse. Some of these theories include the capacity for parallel selves—a very science-fiction proposition. The work was also influenced by study of the drawings of astronomers in Omar W. Nasim’s book “Observing by Hand: Sketching the Nebulae in the 19th Century,” and by a brief essay by Umberto Eco called “Imaginary Astronomies.” I enjoy looking at earnest models of the past in order to understand the way that our own view of the cosmos may look to future generations. I also want to honor the curiosity and imagination of people who have worked toward a greater understanding of the world where we find ourselves.

An abiding love for geological forms and biological systems has been given new language and structure through a current illustration project with biochemist Ben McFarland. The book written by McFarland (and illustrated by me after much brushing-up and dusting-off of chemistry basics) is an account of the genesis of life on earth as seen through the enfolding structure of the periodic table. The book is due to be published later this year.