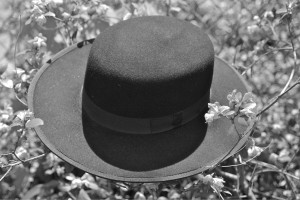 The poet Donald Revell has written of G.C. Waldrep’s poetry: “Christopher Smart and Hart Crane applaud these poems in Heaven because the Earth of these poems is true.” That’s it exactly: the underlying tension that drives Waldrep’s poems is their earthy mysticism. As in his poetry, so in his life: Waldrep spent many years living in an Amish community in North Carolina, though he is now moving through various residencies and academic posts. Again, note that rhythm in his experience: he lives in a community seeking peace by loving the land, and then he inhabits communities that seek peace by loving language. Words and the Word: tilling the soil in order to make the world bear fruit. You could spend as much time with Waldrep’s first poetry collection, Goldbeater’s Skin , as you could with a hefty nineteenth-century novel. And you should.

Some of Waldrep’s work is featured in Image issue 39 and issue 69. Read a poem by Waldrep here.

G.C. Waldrep received a BA from Harvard University in American History in 1990 and a Ph.D. in American History from Duke University in 1996. His first poetry collection, Goldbeater’s Skin,won the Colorado Prize for Poetry (selected by Donald Revell) and was published by the Center for Literary Publishing. His poems have appeared in Poetry, Tin House, Gettysburg Review, and Image, among other journals. From March 1995 to 2000, Waldrep was a member of the New Order Amish Community at Yanceyville, North Carolina, where he worked as a baker, carpenter’s helper, and window maker. Currently he is a member of the Old Order River Brethren.

Waldrep spent 2003-05 at the Iowa Writers’ Workshop. In 2005-06 he will serve as a visiting professor of the humanities and social sciences at Deep Springs College in California.

I finished the manuscript for Goldbeater’s Skin in October 2002 and really began writing the poems that would become part of Disclamor in March 2003, while I was at a residency at the Headlands Center for the Arts in Marin County, California, just across the Golden Gate from San Francisco. My days at Headlands were not easy: I had never spent any real time in California before and had certainly never been confronted with a landscape so utterly different—flora, fauna, topography; even the mold smelled different on rainy days—from that of the southeastern United States of my youth. And of course this particular landscape, for all its beauty, had been a militarized landscape for the past century or more. No one can walk more than sixty feet in that part of the Golden Gate National Gate Recreation Area without encountering some relic of the place’s past as an army base, and no one—I think no one—can contemplate this military history without also factoring in the intense, almost abrasively sensual beauty of the setting. Since Longinus at least we’ve known that beauty and violence (or at least the threat of violence) are what make up the sublime. Never before had I been confronted with such an elegant and irreduceable expression of that equation.

I felt silenced by that equation, which seemed so much larger than me, larger than poetry, larger perhaps than faith. Then the second Gulf War began. And I embarked upon a brief, but intense, courtship of the poetry of Mahmoud Darwish. And I began writing the poems that form the core of Disclamor. I am thinking that I completed Disclamor this past August, though I’m still troubled by some of the darkness in the manuscript and have been experimenting with ways to limit, or at least channel, that darkness through the shaping of the whole.

Concurrently with Disclamor, I’ve been engaged in a very different project, a manuscript of more experimental prose poems rooted in music history and theory. Prior to Iowa my formal arts training was in music (vocal music and conducting) rather than in writing or literature. In the wake of Goldbeater’s I began experimenting with ways to engage this training—this world, in all its mostly nonverbal complexity—more directly. Archicembalo is structured after the fashion of a “gamut,” or musical self-instruction primer that often prefaced volumes of nineteenth-century American sheet music. The titles of the poems take their cues from that antique form: “What is a Key Signature,” “What is a Hexachord,” “Who is Josquin des Prez,” etc. The poems straddle the line between prose and poetry, less prose poems in the style of Russell Edson than lyric disquisitions after the fashion of Carla Harryman, Lyn Hejinian, or Rosmarie Waldrop. Some of this new work is posted on the internet at www.octopusbooks.net and www.conjunctions.com . I hope to finish this project sometime in 2005.

Beyond Archicembalo, I’m not sure where my work will take me. By friends’ standards I’ve been very prolific over the past four years. I suspect a period of silence lies in store: which would be nice, too. There is the silence of prayer, and the silence of the unmaking. One need not fear the former.