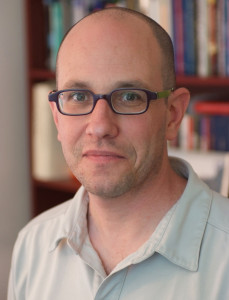 Essayist Jeff Kosky is a natural teacher—by day, he’s a professor of religion at Washington & Lee University—who writes engagingly and provocatively about religion and philosophy. No abstruse academic, he makes what might seem like dry subjects personal, urgent, full of story and drama, and even funny. His essay on Robert Smithson’s land sculpture Spiral Jetty in issue 84 is a typical example—it’s first of all a story about a personal encounter with a gigantic contemporary work of art, but it’s also an inquiry into the nature of life’s journey, using the image of the spiral as a metaphor for how we experience reality while drawing on French philosophy, Milan Kundera, the Genesis narrative, and the history of the American west. Though religion and philosophy are his given disciplines, Kosky is a perceptive and refreshing guide to contemporary art, which he reads as a means of embodying the same concepts religious and philosophic writing attempt to describe. He’s able to take the kind of conceptual or performance-based art that can at first seem chilly and cerebral and create a context in which it becomes a perfect expression of life’s most urgent questions.

Jeffrey L. Kosky’s essay, “Learning to Live on the Spiral Jetty,” is featured in Image issue 84.

Jeffrey L. Kosky is Professor of Religion at Washington & Lee University in Lexington, VA, and also Honorary Professor at the Australian Catholic University. His undergraduate classes share an excitement about the Humanities with students who are not afraid to ask big questions about meaning and purpose while carefully and critically reading great works. What makes the study of Religion particularly important to his classroom is the way it intensifies an important experience of studying the Humanities: it leaves those who study it in the uncertain place of confronting a question that won’t go away.

Kosky is the author of numerous books and essays, including Levinas and the Philosophy of Religion (Indiana University Press, 2001) and Arts of Wonder: Enchanting Secularity (University of Chicago Press, 2013), which received the 2013 Award for Excellence in Constructive-Reflective Studies from the American Academy of Religion and was also named to the New Museum’s list “Favorite titles from the past year.” In addition to these original works, he has also translated several books of philosophy and theology from French to English, notably Jean-Luc Marion’s Being Given: Toward a phenomenology of givenness and In the Self’s Place: The approach of St. Augustine.

Here is a big one: I am currently working on several essays I hope to collect into a book about happiness. That’s become almost a cliché these days when everybody is discovering new ways for us to flourish and be happy—to the point that many among us feel an almost compulsive duty to adopt one or another of the several plans for succeeding at it. This surge of interest in happiness has been surprising to many of us who grew up thinking ourselves too lucid to be happy. Insofar as modernity entailed “the disenchantment of the world,” a claim made famous by Max Weber, we saw most promises of happiness as a ruse and most claims to it as self-deception. We were too knowing in the ways of the world to let happiness make us its dupe.

Working between the believers in today’s happiness and their disenchanted critics, the project joins many scholars who are motivated by a sense that however empowering the project of disenchantment might be for our modernity, it has become deeply enervating. Seeking to address not problems of modernity but problems for modernity (that is to say, not problems that might discredit it and form the basis for a reactionary denunciation of it, but problems that it can address with native resources), these scholars aim to respond to modern disenchantment in ways that offer an affirmation of existence. My previous book, Arts of Wonder: Enchanting Secularity (University of Chicago Press, 2012) took part in this project by showing how leading contemporary artists introduce into modern culture places hospitable to mystery and wonder, redemption and revelation, transcendence and creation—what might be thought of as religious longings that can be part of an enchanting secularity. Pursuing the trajectories of this book, the current project also seeks to break the connection between modern culture and disenchantment. It does do in a more focused way by concentrating on the theme of happiness.

To do so, it considers a canon of authors and artists that is slowly fading from cultural memory as today’s teachers of happiness have made their disenchantment and languishing unfashionable. In this sense, it is a counter-cultural canon—that includes figures such as the artist Caspar David Friedrich, the poet John Keats, the writer Samuel Beckett, the filmmaker Andrei Tarkovsky, philosophers such as Friedrich Nietzsche and Martin Heidegger, and more. When people ask me what I am working on, I often say, “a book about happiness starring Samuel Beckett!” It’s a project that is, in some sense, doomed to fail—but hopefully better.

My smaller, less-formed project emerges in response to a prompt recently given me by an upcoming exhibition on art and spirituality organized by a major museum of contemporary art.

I want to explore visual artists and works that address what it means to have a heart in an increasingly heartless world. Much about society is cold and severe. It does to the heart what Jeff Koons does to the heart in his work Hanging Heart: makes it hard and steely, all surface and impenetrable, or bright red and shiny and tied up in a bow for easy consumption. (See here. And here.)

It’s hard to have a heart in such a world.

Against the hard-heartedness and packaged, consumable sentimentalism of this world are artists of another sort who create work that testifies affirmatively to a willingness to be moved, to be touched. They create work that bespeaks a restlessness that comes from having a heart, a heart that exposes them to the world and all the sad and joyous motions and emotions that come along with being in it among others.

Some declare an explicit aim to see with “the eyes of the heart” (Makoto Fujimura cites Pauline letters asking us to see this way). Others do so without such an explicit declaration yet seem to see in a heartfelt way (perhaps the portraits of Y.Z. Kami). At times, the vulnerability witnessed reaches the point of crying (Marina Abramovic’s “The Artist is Present” being an example) and even crying out in prayer (Jan Estep, for instance, recorded prayers adapted from buddhist meditations on compassion and lovingkindness to Gunayin, the boddhisatva “who hears our cries”). The exposedness from which these cries and prayers speak approaches the place where the heart might be in the world.

The proper place of the heart is an old theological question and one that cuts across many religious traditions. Art that speaks from a place of the heart can perhaps cultivate the virtue of tenderness in a fragile and vulnerable world.