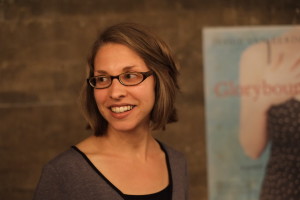 Jessie Van Eerden writes with force and sensitivity about what Dennis Covington calls “the only ethnic group in America not allowed to have a history”—the residents of her native Appalachia. Her vivid writing unfolds the lives of mountain people with humanity and grace. Her debut novel, Glorybound, follows two very different daughters of a fallen holiness preacher in a West Virginia mining town, one silent and observant, one wild but untouchable, both iron-willed, magnetic, and mysterious to the people around them. With a sure hand, she reveals the deep bonds that connect them and the slow healing of old wounds as they work to confront the past. In her polished nonfiction (among other matters), Van Eerden grapples with the thorny question of how mountain people are portrayed in documentary art—especially photography and nonfiction. From Walker Evans to The Beverly Hillbillies to a new crop of reality TV shows, mountain people have been held up as other, as weird, laughable, and luridly different from the rest of us. Her questions take her to the deepest questions about what art is for and what it can do. She is less interested in shaming us for buying into stereotypes than in revealing a common humanity. It’s not in the power of the artist to humanize, she says, “only to let through the humanity that is there.”

Some of Van Eerden’s work is featured in Image issue 59 and issue 72. Read an excerpt by her here.

A West Virginia native, Jessie van Eerden holds an MFA in nonfiction writing from the University of Iowa. She was selected as the 2007-08 Milton Fellow at Image and Seattle Pacific University for work on her first novel, Glorybound (just released by WordFarm). Her essays and short stories have appeared in The Oxford American, River Teeth, Precipitate, Bellingham Review and other publications. Her essays have been selected for inclusion inBest American Spiritual Writing (2006) and in Sarabande’s forthcoming Red Holler: An Anthology of Contemporary Appalachian Literature (late 2012). Jessie has taught for over ten years in adult literacy programs and college classrooms, including The Oregon Extension of Eastern University, and she currently lives in West Virginia where she directs the low-residency MFA program of West Virginia Wesleyan College. You can read more of Jessie’s work online at jessievaneerden.com.

I’ve completed a second novel manuscript and I’m hoping to devote some time to editing that work, now that the first book is out in the world. But most recently, because I’ve just transitioned back to West Virginia to direct Wesleyan’s MFA program, I’ve been drawn to smaller projects. I’ve been probing the subject of grief through both poetry and prose. I’m drafting a narrative poetry sequence with a central figure, Judy Donne, who acts as a mourner for her small community. And I’ve slowly been working on an essay exploring the story of a little-known biblical character named Rizpah, one of Saul’s concubines. When her sons and grandsons were executed because of the debt incurred by the king, Rizpah protected their corpses for seven months, during the barley season. The story intrigues me and seems to say something very powerful about the way we live alongside death; I’m hoping to unlock at least a fraction of that meaning as I enter into the story imaginatively.