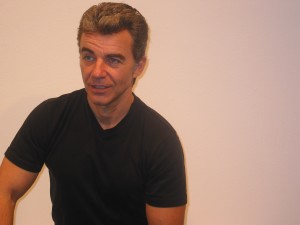 Painter Jim Morphesis creates works suffused with passion. Not passion in the superficial sense of “enthusiasm,” but in something closer to the dramatic, scriptural meaning of the word. When you encounter his work you have to brace for some pain, for the suffering and sin and violence and awareness of mortality that characterize our human experience. Morphesis says he paints “flesh and bone,” which makes sense, because it is in the human body that suffering leaves its marks. Skulls, heart, torsos, the crucified body of Christ: all of these appear in his paintings. The very application of paint itself is fleshly—thick, built up as if over a long period of patient endurance. Whether he is drawing on biblical narratives or classical myths, Morphesis works within the great tradition of Western art, interweaving his meanings so that form and content become one.

The new body of work is even more challenging, because it draws directly from the imagery of the packing house. Yet nothing is gratuitous in these pieces: if the viewer is willing to trust the artist, the journey into darkness and pain will be rewarded by a powerful sense of human dignity and even hope. That’s where that word passion comes in. As in the Gospel, Morphesis knows that passion doesn’t mean mere passivity: true human passion, as Christ modeled it for us, involves an active leaning in to what the world brings us. The great Japanese film director Akira Kurosawa once said that “the artist is the one who does not look away.” Jim Morphesis does not look away. Neither should we. 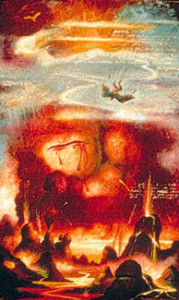 Some of Morphesis’ artwork is featured in Image issue 5.

“For most of the past three decades my paintings have dealt with images of flesh and bone. I have sought to develop a personal vocabulary of imagery derived from Christian iconography and mythological prototypes long capable of representing humanity’s strengths and frailties, both moral and physical. In my paintings, images of the Crucifixion, Prometheus, skulls, hearts and apocalyptic vistas have been created through weighty gestures of paint and layers of collage. In recent solo exhibitions, inspired by the ancient tale of the Greek satyr-god Marsyas and using packing house images of meat and bone as my models, I created large scale abstractions that, I trust, spoke of beauty and decay and how sacrifice can lay fecund ground for the good of those in time to come. In my current work, fleshy layers of paint reveal both abstractions of the body and floral images. During the second half of 2008, my paintings will be featured in A View from Within, at the Frederick R. Weisman Museum in Malibu, California, and Psychedelic: Optical and Visionary Art since the 1960s, the San Antonio Museum of Art.”

Each month our website features one of the many artists and writers whose work has appeared in our pages. Many of these artists also teach at our Glen Workshops and speak at our annual conferences.