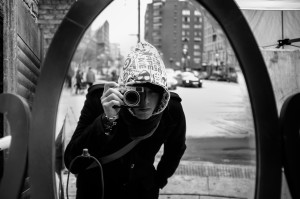 In his photographs of urban Toronto, Jonathan Castellino explores abandoned office spaces, with dated computer monitors and keyboards still dutifully in place under layers of dust; empty factories, where water infiltration and the resulting mineral bloom create a forlorn beauty; and crumbling church interiors layered with brick dust and graffiti, all bathed in eerie light. But Castellino can’t be pigeonholed as a documentarian of urban ruin. In the loving way they frame these lost and humbled spaces, the photos convey a sense of stillness and attention that often feels holy. Certain works present urban forms as a sort of found sculpture, majestic shapes whose beauty usually escapes us. Even in spaces where the decay is most advanced, the mood is meditative rather than shocked. What he’s often photographing is the passage of time, the inescapable fact that certain human aspirations do crumble and pass away. Spending time with his photos is likely to change the way you see your own city. Samuel Thomas Martin’s vivid personal essay from issue 86 describes how for him, as a person whose Pentecostal background has made him wary of church imagery, the eerie sense of absence in Castellino’s photos has itself become a sort of manifestation of divine presence. Martin writes, “Each of his photographs, in setting apart a scene, becomes a sacrament: a lifting up of things seen to recognize their significance—to reveal that significance, that holy worth.”

Jonathan Castellino is a photographer based in Toronto, Canada, and an adjunct instructor of architectural photography at the Willowbank School of Restoration Arts in Queenston. His work has appeared in magazines and journals such as Brick, Spacing, Now, in several books and national newspapers, and has been featured in galleries and photography websites as well. His main photographic subjects are urban and industrial spaces, through which he explores the intersection of architecture and culture, of personal meaning and the built environment. He has several ongoing projects pertaining to his exploration of Toronto and has pursued similar projects in Southern Ontario, New York State, and Michigan.

Photography is a lived, daily experience for me. Through it I examine my interaction with the architecture of my environment. I am currently working through a series of composite images called interference.patterns, where I attempt to describe beauty found in the complexity of city life.

Cities are layered, with many converging landscapes. Somehow, we imagine a unified view of their structure. The fact that there are different, conflicting and yet overlapping cities within cities, as it were, is difficult to convey in any single image.

Giving the viewer a “slice of time” has always been the party trick of photography—and this is exactly why photographs have such hold over us: unlike ourselves, they exist outside the “always already” of ordinary time. In this series, my question of the photograph and of the city is the same: how do we shape it, and in turn, how does it shape us. Multiple exposures within a single image is my way of holding this together.

nterference.patterns, like all of my photographic endeavors, is an attempt to press beyond mere description, and explore how the city feels—to document the emotional landscape.